Amazon Prime Air would deliver packages up to five pounds, but it's far from clear that drones would be safe and welcome in urban areas.

Amazon.com is testing drones to deliver small packages, CEO Jeff Bezos said on Sunday in a 60 Minutes interview. The company's goal is to be able to deliver goods to customers within 30 minutes of receiving an order.

The tests are being conducted with drones known as octocopters, with an eye toward being able to carry payloads of up to five pounds. The service is tentatively called Amazon Prime Air.

"The hardest challenge in making this happen is going to be demonstrating, to the standards of the FAA, that this is a safe thing to do," Bezos told 60 Minutes correspondent Charlie Rose. "I don't want anyone to think that this is just around the corner. This is years of additional work from this point."

When Rose pressed him to provide a more precise timeframe, Bezos said that he's an optimist, and that he believes the technology could be ready in four to five years.

What's less clear is whether consumers will be ready. Given US military use of drones, there's a large portion of the world that isn't likely to be receptive to deliveries from the air. Beyond that, drones raise issues of privacy, safety, noise, and regulation. 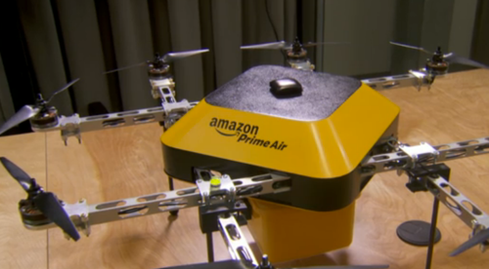 Civilian drones are currently regulated under the FAA's rules for flying model airplanes (AC 91-57). Under current rules, the FAA expects drones to remain within the operator's line of sight. The FAA Modernization and Reform Act of 2012 directs the agency to integrate drones into national airspace rules by September 2015.

A 2005 report titled "Safety Considerations for Operation of Unmanned Aerial Vehicles in the National Airspace System" is cautiously optimistic about the potential for small UAVs to operate safely, even in densely populated areas. "For mini UAVs, operation over 95% of the country could be achieved, with a low reliability requirement," the report states. "To operate over highly populated areas, additional mitigation measures that lessen the impact if an accident occurs may need to be employed."

And drone accidents do occur. A remote controlled drone crashed at Virginia Motorsports Park in Richmond in August during the Great Bull Run, a recreation of Spain's Running of the Bulls. Four or five people received minor injuries as a result, according to The Washington Post, which has published video of the drone descending into the crowd. Bezos coincidentally bought The Washington Post that same month.

In October, a man was nearly struck by a drone that crashed at his feet in Manhattan. The drone operator, reportedly a 34-year-old Brooklyn musician, was arrested.

The FAA is revising its rules for operating unmanned aerial vehicles. Whatever safety measures end up being required by the agency, drone costs will probably go up as a consequence. And if the drone delivery industry ever takes off, it will take only one terrorist using a drone to deliver explosives to bring the whole thing crashing back to Earth.

Nonetheless, drones are already a hit with investors. In October, Bloomberg reported that venture capitalists had invested $40.9 million in drone-related startups during the first nine months of 2013 -- more than twice the amount invested in all of 2012. Like Bezos, drone investors appear to be optimists. Or their financial padding ensures they would survive a drone industry crash.

There's no single migration path to the next generation of enterprise communications and collaboration systems and services, and Enterprise Connect delivers what you need to evaluate all the options. Register today and learn about the full range of platforms, services, and applications that comprise modern communications and collaboration systems. Register with code MPIWK and save $200 on the entire event and Tuesday-Thursday conference passes or for a free expo pass. It happens March 17-19 in Orlando, Fla.

We welcome your comments on this topic on our social media channels, or [contact us directly] with questions about the site.
Comment  |
Email This  |
Print  |
RSS
More Insights
Webcasts
People Are The Most Important Part of Autonomous SOC
Don't Miss This Cybersecurity Virtual Event
More Webcasts
White Papers
The State of Endpoint Security
How to Build Your Incident Response Plan
More White Papers
Reports
Accelerate Threat Resolutions with DNS
Key Strategies for Managing New Risks in Cybersecurity
More Reports

This is new to me, i read more about it, they'll initially carry items up to five pounds, which is roughly 86% of all deliveries Amazon makes, one of concern area i see is eligibility criteria for using drone service.
Reply  |  Post Message  |  Messages List  |  Start a Board

I suspect drone downing will become a popular if not entirely legal sport in certain parts of the US.
Reply  |  Post Message  |  Messages List  |  Start a Board

You jest, but Waterstones jokingly brought this up in response to the Amazon story:

"But what have we become as humans when we need to satisfy every whim instantaneously? Our strength comes in part from patience, and that is deteriorating with each passing day and each technological leap. At some point we need to ask if always bigger better more faster compels us toward becoming a new generation of grown adults acting like spoiled brats."

I agree. We have become more and more of an instant generation.  We always want things faster. I remember seeing someone showing his grandmother an electric kettle and said, she'd get her water boiled faster. She wasn't impressed because she didn't mind waiting a few minutes.

Consider how much we want everything "on demand" and that means at the instant I demand it. And the more that surrounds us, the more we expect it. While I have FIOS now for my internet, it still moves slowly at times, and I find myself impatient about it. But several years back, I had dial-up and had to wait far longer for things to load.
Reply  |  Post Message  |  Messages List  |  Start a Board

I'll admit that last week while sitting in Chicago rush-hour traffic, I fantasized about a drone-based pizza delivery service to those in traffic.

But what have we become as humans when we need to satisfy every whim instantaneously? Our strength comes in part from patience, and that is deteriorating with each passing day and each technological leap. At some point we need to ask if always bigger better more faster compels us toward becoming a new generation of grown adults acting like spoiled brats.
Reply  |  Post Message  |  Messages List  |  Start a Board

A drone rebellion against mankind is a concern. Have we learned nothing from Battlestar Galactica?
Reply  |  Post Message  |  Messages List  |  Start a Board

Yeah, Bezos is a master. There's a reason Amazon has a market cap of about $120 billion with very small profits. It has a leader who thinks long term, takes risks, but is always customer-focused. These package-delivery drones may turn out to be a nutty idea, but so was the concept of a self-driving car a year or two ago.
Reply  |  Post Message  |  Messages List  |  Start a Board
Page 1 / 3   >   >>
Editors' Choice
Hot Topics