50%
Tweet
Smartwatches based on Google Android comprised 61% of devices in this up-and-coming category last year. Galaxy Gear deal begins this weekend.
10 Wearables To Watch At CES 2014
(Click image for larger view and slideshow.)

Wearables may still be in their infancy, but Google's Android platform has already put its stamp on smartwatches. The vast majority of devices shipped during 2013 relied on Android, according to Strategy Analytics. Google shouldn't get too comfortable, though, as competitive platforms could easily erase Android's early lead.

Smartwatch shipments reached a new record in 2013, with 1.9 million units seeded worldwide, according to Strategy Analytics' latest Wearable Device Ecosystems report. Of the 1.9 million, Android was responsible for 1.2 million smartwatches, giving it 61% of the smartwatch market. Android shipped more smartwatches than all other platforms combined, but there's a big catch: The Samsung Galaxy Gear accounted for the bulk of Android's smartwatch shipments.

The Gear is generally regarded as a flop. It is expensive, bulky, and compatible only with select Samsung smartphones. The fact that it comprises three out of every five smartwatches shipped in 2013 paints the market in an entirely new light. Shipments of Pebble's smartwatch number somewhere near 300,000. Sony and Qualcomm haven't said how many smartwatches they shipped, but obviously the numbers are low. In other words, the smartwatch market has a long way to go, and the field is wide open.

[HTC promises its own contender in the smartwatch market. Read HTC Wearable In The Works.]

"Android currently has several challengers in the smartwatch space, like Firefox and Pebble OS, but none of them are a major threat at this stage because of their relatively limited ecosystems and modest retail presence," said Woody Oh, senior analyst at Strategy Analytics, in a news release. "Android's main risk to its smartwatch dominance in the future will come from Apple iOS, Microsoft, and perhaps Tizen or COS. These four brands have the potential scale or marketing power to offer a credible alternative to Google's popular platform." 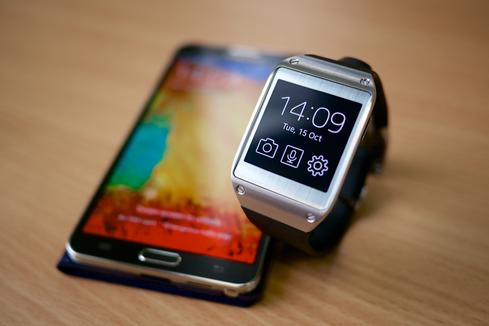 It's hard to believe that Samsung won 2013 with the Gear, but the company was smart to rely on Android. The Gear 2, a new smartwatch that may arrive as soon as this month, likely runs Android. The big question is whether or not other consumer electronics companies will also rely on Android. China's Huawei, Lenovo, and ZTE have all said that wearables are on the way this year. They didn't say what platforms the devices will be based on, but it's easy to guess

Strategy Analytics' Oh is right, however, to suggest that the biggest threat to Android's early lead in the smartwatch space comes from Apple and Microsoft. Apple is widely expected to bring a smartwatch to the market before the end of the year, which will likely run a version of iOS. Given the popularity of Apple's iPhone, the iWatch could be a big hit with iPhone owners. Strategy Analytics also believes that wearables will continue to be a niche market, serving primarily as accessories to smartphones. Based on the products released over the last 12 months, it's clear that smartphones and smartwatches will be "besties" for the foreseeable future.

As an aside, Best Buy is clearing out its inventory of the Galaxy Gear, offering the device at half price for the weekend, with several color options available for $150. You can find it here.

I absolutely agree, for a smartwatch to be useful it does actually need to be SMART.

Taking an example, some workman with one hand holding a tool, can glance at his watch much more easily than trying to get a phone out of his pocket, which could easily be fumbled and dropped.

Another example is a sports or fitness person jogging, does not really want to have to have a bulky smartphone stuffed down their pants.

Maybe poor examples, but it is just to show that other posts on this thread are right by saying that STAND-ALONE is the way to go. NOT dumb devices which have no brain of their own.

You have to see this that many have described as a REAL EYE OPENER.

The image below is from this link: http://www.orsto.com/what-is-a-smartwatch.html

I agree that the smart watches will be more successful when they become stand alone devices but I have to say I'm not seeing a whole lot of regular watching in my day to day interactions.  I know there are a few niches where watches are cool again but I don't see that becoming a very wide trend.
Reply  |  Post Message  |  Messages List  |  Start a Board

Actually Sanel, Watch sales are up...especially premium ones.  Even though people in tech world said phones would kill it.

The reason the 'smartwatches' are and will continue to be a dud is that they are dependent devices.  You need to have a phone on in your pocket or purse or backpack.... so it is a pretty bad user experience.  Samsungs Gen II watch has fitness features and a better battery which the rocket scientists at Samsung think will make you want to keep it on your wrist.

After the hey look at me phase wears off even the new Samsung watch will go into the drawer with the last one.

Watches will be successful when they are stand alone devices SAD.  One reason Apple has not stupidly launched one of these current type of watchs
Reply  |  Post Message  |  Messages List  |  Start a Board

This is a great point.  Most of us have stopped wearing watches because we have time keeping devices everywhere.  These smartwatches are very heavy on the watch and the smart part is kind of secondary.  They remind me of the calculator watches of the 80s.  I can only think of a couple things I would use a smartwatch for, the most frequent being checking the time and I don't need to spend a lot to do that.  Secondly weather or reading SMS messages would be workable but I wouldn't want to try typing on a display that tiny.   If I'm going to need my phone for responding why not get it out in the first place?
Reply  |  Post Message  |  Messages List  |  Start a Board

Parents who want to spend more time with their children
-Trailing military spouses
-Retirees
-Stay at home moms
-Students
-Retirees
-or anyone else needing supplemental income
We can help you... Visit us and sign up at our website and you can start earning from online work.
Start here>>>>>

If smartwatches are largely adjunts to smartphones and tablets, how can Microsoft be a contender in theis promising new category?
Reply  |  Post Message  |  Messages List  |  Start a Board

The magic is not in the circuit boards for smartwatches that are widely availabe, it is creating a smartwatch that the average person who spends maybe £500 - £1000 on a wrist watch would actually want to wear.

The Samsung Gear has so far come as close to achieving that. In answer to the person writing this article, No it is NOT bulky at all, given the amounts of components that go into a smartwatch. The battery alone needs to be at least 3 -4 mm thick.

A smartwatch with a 1.5" screen will never ever ever fit into a 1" circular watch casing. And likewise a 40mm X 35mm X 4mm battery which is capable of 300 mAh, will NEVER ever ever be good for 1,500 mAh normally found in a much larger smart PHONE.

It is widely known by industry insiders that the worlds best and most exclusive smartwatches will appear at the Wearable Technology Show in London March 2014.
Reply  |  Post Message  |  Messages List  |  Start a Board

TabletMaxx  is one of the first sources to offer a new smartwatch to launch in February -- the Smart Q Z-watch - priced at $155, is a new updated model from the original that launched in December and now features Android 4.4 and works with iPhones and Android phones, and made by award-winning Smart Devices, which won a 2013 CTIA E-Tech Award for innovation.

The Z-watch is the same price point as the popular Pebble watch, but offers better features -- and works with both Android phones and Apple iPhones to handle phone calls and views texts and schedule.

The SmartQ Z-Watch offers an advanced 1Ghz processor, a high resolution color touchscreen display, a full-featured MP3 Player, a Walking/Jogging Pedometer and sleep analyzer and twice the battery capacity of most other smart watches currently on the market.  In comparison, the Pebble Watch offers a monochrome non-touch display,  a slower 180Mhz processor and only allows for 8 Apps to be installed to the Pebble.

TabletMaxx -- also includes a premium headset for the Z-Watch for MP3 functionality, as well as an extra leather watch strap as part of a holiday promotion.