Apple Pay Rings The Register In the US, Not Europe - InformationWeek

50%
Tweet
While Apple Pay has moved beyond a toehold in the United States, Europeans are looking at other NFC-based payments as banking regulations and technology have not meshed well with Apple's offerings.

Last year, when Apple finally launched the iPhone 6, it didn't manage to surprise anyone, as most of the new smartphone's features had been leaked weeks before. Nonetheless, the tech giant's big launch event still attracted the world's attention and huge media coverage.

One product announcement during the event, however, actually was revolutionary: Apple Pay, the company's mobile payments platform.

European customers have been waiting ever since to start using the service, which has only been available in the UK since July. They may well have to wait a lot longer because European banks do not agree with Apple's conditions or, especially, with their transaction fees.

During the past 12 months Apple Pay achieved what others dreamed of years before. They allowed users to put payment cards in a "mobile wallet" on their smartphones.

As expected, Apple had to concede that NFC (Near Field Communication) is the de facto standard for mobile contactless payments. At that time of the launch there were only 220,000 shops in the United States that could accept payment using contactless cards, a mere 2.4% of eight million merchants. However, in Europe and Asia, the number was already significantly higher. 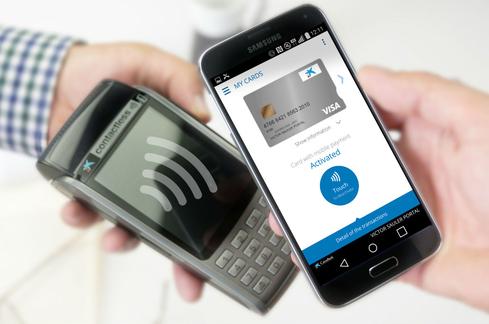 The real disruption that Apple brought with Pay is the way the system is implemented -- Apple left the carriers out of it. In fact, after the initial shock, the main carriers tried unsuccessfully to launch their own mobile payments solution, called Softcard, only to finally sell it off to Google.

Apple Pay has been a huge success in the United States. After the initial period with just a handful of banks, hundreds of other banks and credit unions begged Apple to include them in the platform, afraid they would lose mobile customers.

The price: A substantial setup fee plus 15 basis points (0.15%) of each transaction.

"Apple's playing a long game. They could use [consumers'] adoption to run an end-game around the existing payment infrastructure," Ben Milne, founder of payments processor Dwolla, told the Financial Times in 2014. "Their ownership of hardware, software and hundreds of millions of customers' payment details, he says, means they're the only company in the world that can actually do that ... Apple is not a company afraid to exercise control."

While the US has advanced significantly in the number of contactless terminals, especially since the EMV chip-card liability shift will happen next month, that number is only a small fraction of the millions of POS systems in Europe with that technology.

But European banks and credit card exchanges are not ready to share a significant portion of the fees with Apple.

In the Eurozone, the interchange fees for credit cards are capped by the European Central Bank and governments of the member states. Those fees are already low, less than 0.5%.

Interchange fees are charged by the card-issuing bank to the card-processing bank when a transaction occurs.

For example: If a customer of bank A purchases something from a retailer or service (such as a restaurant) that has an account with bank B, then bank A collects a portion of the fee paid by the business to bank B. In countries such as the US and the UK, those fees are negotiable, and usually higher.

The European Union has been very active in trying to reduce the fees paid by merchants to banks and credit card exchanges, in order to reduce the number of cash transactions as a way of fighting fraud and lowering costs. The European Commission estimates savings will be around six billion euros ($6.8 billion). In countries such as Finland and Denmark cash has almost disappeared. But in southern European countries cash is still king, especially for small transactions.

Just recently in Spain, a country with more than 600,000 contactless payment terminals, the central government capped the interchange fees to 0.2% for debit cards (with a maximum of 7 eurocents per transaction)  and 0.3% for credit cards, which is the maximum recommended by the EU. If banks need to pay Apple 0.15% for every transaction, there is not much profit left for them on credit cards, and they' lose money with debit cards.

[Read more about whether Apple Pay has been a success or flop.]

That is why Apple, a year after launching Pay, hasn't made any more announcements of deployment in Europe following the launch in the UK in July.

But European banks are not waiting for Apple.

Many of them have already launched mobile-payment applications, some with national carriers such as Telefonica, Vodafone and T-Mobile, and others on their own. Just recently, La Caixa, the biggest European savings bank, launched CaixaBank Pay, using Host Card Emulation (HCE) on Android, compatible with most devices running Android OS 4.4 or higher.

But Apple doesn't support HCE and has not allowed anyone to access their proprietary NFC chipset, something necessary to implement secure contactless payments.

Time will tell, but for moment, I don't see Apple Pay coming to the rest of Europe anytime soon.

Pablo Valerio has been in the IT industry for 25+ years, mostly working for American companies in Europe. Over the years he has developed channels, established operations, and served as European general manager for several companies. While primarily based in Spain, he has ... View Full Bio
We welcome your comments on this topic on our social media channels, or [contact us directly] with questions about the site.
Comment  |
Email This  |
Print  |
RSS
More Insights
Webcasts
DevOps: Innovating with Speed, Security, and Quality
Securing Active Directory the Way it Deserves
More Webcasts
White Papers
Container Security Best Practices: A How-To Guide
CyberSecurity Trends 2020
More White Papers
Reports
The Threat from the Internet--and What Your Organization Can Do About It
Making the Financial Case for Outsourcing Endpoint Protection
More Reports

Unfortunately I can't comment on the Apple Pay situation in Canada. I've been talking to several banks in Europe and their position is basically the same: too expensive!

I believe Apple doesn't want to lower their fees in Europe because some of the big American banks will ask for a better deal.

And European customers are already used to tap-and-pay with their debit and credit cards. It is easier and faster than using a smartphone.
Reply  |  Post Message  |  Messages List  |  Start a Board

Apple went overseas for their second implementation. When will they come back to the New Continent and extend Apple Pay to other NAFTA coutries?