iPad sales lost momentum last quarter, but Apple remains the tablet king for businesses, according to a new report.

Apple's iPad sales lost some steam in the most recent quarter, but the device is still the top tablet for businesses, according to a report released Wednesday by mobility management vendor Good Technology. It claims iPads accounted for 92% of enterprise tablet activations from January to March.

Good derived the data by tracking device activations in its customers' organizations. Together, iPads and iPhones represented 72% of mobile device activations during Q1. Android devices, mostly smartphones, comprised most of the rest. Just over half of all activated devices were iPhones, and just over 20% were iPads.

Good reported that Windows Phone handsets accounted for only 1% of activations. Windows slates don't factor into the data because Good's products do not support Windows 8, 8.1, or RT.

Good observed that custom app deployment was up more than 77% quarter-over-quarter. The company also said users tend to install certain apps on tablets, and others on smartphones. Smartphone users activated more apps related to unified communications and document management, while those with slates were more likely to install document-editing apps. Tablets users installed twice as many enterprise apps as smartphone users, and iOS devices accounted for 93% of app activations.

The overall OS figures are almost identical to those Good calculated in its previous report, which described the last three months of 2013. In the latest edition, Android gained a percentage point while iOS lost one. Without knowing the full size of the sample, or Good's share of the mobility management market, it's hard to assign this shift much significance. 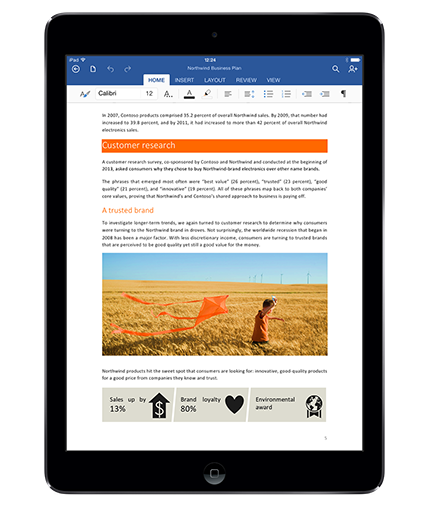 Good's customer base includes a sizable sample of more than 5,000 organizations worldwide, including many Fortune 100 companies. That sample is substantial enough to testify to the iPad's continued enterprise appeal, but the data still paints only a partial picture. Though the company's potential sample size is large and varied, Good didn't specify how many organizations or device activations informed the new report. Good also excluded data from customers who activated fewer than five smartphones or tablets. InformationWeek contacted Good for clarification but did not yet receive a reply.

Despite sampling ambiguities, Good's report starkly contrasts the newest stats from research firm IDC, which said last week that iPads accounted for less than a third of tablet shipments in the most recent quarter. Is this evidence that Good's stats don't reflect the actual enterprise market? Not necessarily.

Whereas Good focused only on enterprise users, IDC took stock of the entire tablet industry. Enterprises and consumers don't always follow the same criteria when purchasing tablets. Few average users care how their tablets fit into existing MDM systems or business workflows. As the tablet that popularized the form factor, the iPad enjoys robust support from ISVs and developers, one of many factors that make it appealing to businesses.

Android has grown competitive as an enterprise offering as well, but that's not the reason for the OS's meteoric rise. At least some of Android's market share stems from budget markets in which Apple declines to compete. Cheap Android devices are popular in emerging regions, where users' first computing devices are often low-cost mobile devices instead of traditional PCs. This trend arguably gives Android some traction with the next generation of computer users, but it also means Android's market share is inflated by customers with whom Apple isn't particularly concerned. Enterprise and BYOD users, on the other hand, are more firmly in the iPad's wheelhouse. It's plausible, in other words, that iPads continue to dominate the business tablet market, as Good's report asserts, even while falling behind Android overall.

That said, Apple's enterprise popularity might increase in coming months due to the recent release of Microsoft Office for iPad. The suite was downloaded more than 12 million times during its first week on the market. Microsoft plans to release touch-oriented Office apps for Android tablets and Windows slates' Modern UI, but for now, only iPads boast such a product.

Michael Endler joined InformationWeek as an associate editor in 2012. He previously worked in talent representation in the entertainment industry, as a freelance copywriter and photojournalist, and as a teacher. Michael earned a BA in English from Stanford University in 2005 ... View Full Bio
We welcome your comments on this topic on our social media channels, or [contact us directly] with questions about the site.
Comment  |
Email This  |
Print  |
RSS
More Insights
Webcasts
Fintech at SaaS speed: Navigating the scale & security challenge
4 Practical Tips for Building a Data Lake
More Webcasts
White Papers
4 Key Elements of an ML-Powered NGFW: How Machine Learning is Disrupting Security
VPN Risk Report
More White Papers
Reports
Future Proofing Your Network for 5G
Gartner's Top 9 Security Trends in 2020
More Reports