Starbucks leads the other coffee chains in terms of overall speed. Wefi's data shows Starbucks' average download speed rates 0.18 Mbps. Tully's followed, with 0.15 Mbps, and Dunkin' Donuts ranked third, with 0.13 Mbps. Google provides the WiFi service at most Starbucks locations, though some stores still rely on AT&T. Wefi didn't specify whether it tested both Google- and AT&T-backed Starbucks stores or only those with Google. Either way, the Seattle-based chain edged out the others.

For comparison's sake, I tested the WiFi at my local Starbucks. It provided a ping time of 112 ms, with the max download and upload speeds rating 1.25 Mbps and 0.45 Mbps, respectively. Wefi's results are based on average speeds, not peak speeds.

[LinkedIn is a great resource, but you need to use it right. Read Stop Doing This On LinkedIn Now.]

Starbucks may provide the fastest average speeds, but Dunkin' Donuts' customers do a lot more Web surfing. On average, Dunkin' Donuts surfers consumed 47.45 MB of data per session. Tully's ranked second, with 27.75 MB, and Starbucks ranked third, with 24.26 MB. The most-browsed sites are, unsurprisingly, Facebook, YouTube, and Twitter -- not exactly corporate VPNs. Further, Google's Chrome browser was by far the most-used application, rating 18 minutes of up time per device. Facebook followed, with 16.8 minutes, and YouTube ranked third with 14.8 minutes.

The data suggests that most of the people surfing the Web at their local coffee shop are using smartphones or tablets rather than laptops. Google's Chrome browser is the default browser on many Android smartphones. With Android's dominant market position, it's no revelation the Chrome is the most-used mobile app at coffee shops. 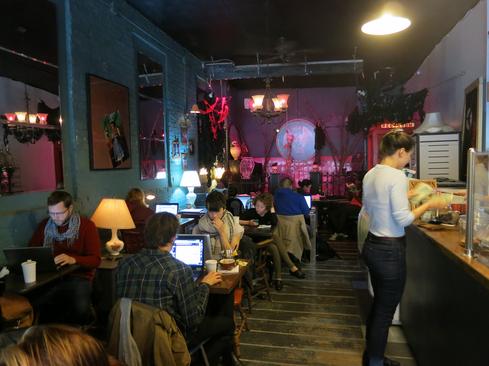 "Coffee -- and by extension, coffee shops -- are increasingly seen as an indispensable part of Americans' morning ritual," said Zur Feldman, Chairman and CEO of Wefi. "With many franchisees looking to provide additional services and grow their businesses, the availability of a fast, reliable WiFi offering has become an important consideration."

Sure, users want fast and reliable WiFi, but let's be frank: These WiFi speeds stink. Another way to look at Starbucks' 0.18 Mbps speed ranking is 180 Kbps. That doesn't even qualify as broadband. Today's LTE 4G networks often deliver average speeds between 7 and 20 Mbps -- that's as much as 100 times faster than Starbucks' WiFi. Further, Starbucks and other coffee shops often have a dozen or more people connecting to their networks, which reduces bandwidth for each individual user. (Granted, access to LTE often costs a pretty penny, and 4G is also susceptible to congestion.)

Quite honestly, the coffee shops Wefi rated can do a lot better, especially if they want to attract money-spending mobile professionals. Busy employees don't want to download huge PowerPoint files over a WiFi network that doesn't even rank as broadband. It would be great for Wefi to rank average WiFi speeds at large hotel chains, especially those that offer it for free.

What do you think? Are these speeds good enough? Do the results mesh with your experience?

"It would be great for Wefi to rank average WiFi speeds at large hotel chains, especially those that offer it for free."

Why dig up dirt about hotels offering free WIFI?  I commend them for offering that service and am willing to accept modest speeds as long as they are reliable.

Instead, why not focus first on the hotels that charge for WIFI? What level of service do you get for your money?  I'd bet many of those aren't broadband speeds either.
Reply  |  Post Message  |  Messages List  |  Start a Board

The biggest problem I have with working in coffee shops is this exact problem. While I usually go to Starbucks to work, there are people using streaming services like YouTube that slow down the overall connection for everyone.

I had hoped the switch from AT&T to Google for Starbucks would alleviate this somewhat, but that has not happened. Yet.
Reply  |  Post Message  |  Messages List  |  Start a Board

I find most coffee shop wifi unusable, so do the same: Fire up the 4g mobile hotspot.
Reply  |  Post Message  |  Messages List  |  Start a Board

Yes. And with personal mobile connections available if you have the possibility it's always better to stick to your own connection. Still, I am surprised of the low speed connection they have.

Many times I use the WiFi in coffee shops in Finland and it's always fast. But then again, broadband is a legal right here so even the slowest connections are fast and in broadband category.

@ Susan.  I was surprise about that as well.  Even though, it is advertise as Wifi, it provides low speeds. If that is the case, I prefer to connect to the Internet via my cellular provider.  I wouldn't give my coffee for such low Wifi speed.  In addition to the low speed, their wifi is unsecure.
Reply  |  Post Message  |  Messages List  |  Start a Board

I've been in a number of Starbucks that have two very similarly named wireless networks. I have to believe that one is legit and the other is out there waiting to grab my login credentials. My preference for security and bandwidth is to fire up the mobile hotspot on my Verizon 4G LTE phone. It's more secure and open WiFi and certainly a heck of a lot faster.
Reply  |  Post Message  |  Messages List  |  Start a Board

According to a report, "With coffee shops becoming a popular destination for both work and play, bandwidth connectivity has become a key differentiator for businesses especially as 39 percent of Americans would rather give up coffee over Wi-Fi, according to a recent Broadcom survey."

I believe anyone in the world would rather give up coffee over WiFi.

What I find insteresting is how slow the Interent is in those coffee shops in the US that is not even in the category of broadband.

"Google provides the WiFi service at most Starbucks locations, though some stores still rely on AT&T. Wefi didn't specify whether it tested both Google- and AT&T-backed Starbucks stores or only those with Google."


Too bad they didn't specify. I'd be curious. Even though San Francisco isn't far from Google's HQ, most of the Starbucks around here seem to still use AT&T-- and man, it's slow. Sometimes it's so slow, I start to suspect the Starbucks is limiting the speed in order to displace laptop-toting people who've been taking up table/chair space all day.
Reply  |  Post Message  |  Messages List  |  Start a Board

It would be very interesting to see whether malware acquired though public WiFi nodes is correlated more with one particular company than another.
Reply  |  Post Message  |  Messages List  |  Start a Board

Eric, very good post as i have always been curious the level of WiFi service experience between Starbucks and Dunkin Donuts locations. The item I noticed missing was relating to security of the WiFi provided. Did the wefi report make any mention as to the level of security used in these WiFi deployments?
Reply  |  Post Message  |  Messages List  |  Start a Board
Editors' Choice
Hot Topics