50%
Tweet
The social network aims to provide Internet access from the air to those without connectivity options.

Facebook is ready to begin testing a full-scale version of its Aquila drone, one of an eventual fleet of drones designed to provide limited Internet service to the estimated 10% of the world without reliable network access.

The unmanned aerial vehicle (UAV) has a 42-meter wingspan, the length of a Boeing 737-900ER. Though its carbon-fiber structure weighs only 880 lbs (400 kg), it cannot take off on its own.

When Facebook tests Aquila in the US later this year, the company plans to lift it into the air using balloons, the means by which rival Google has chosen to provide Internet connectivity in remote areas. Facebook has opted to use UAVs because they can be controlled more easily than balloons.

In March, Facebook conducted its first drone test, using a smaller model, in the UK.

Once deployed for normal operation in support of Facebook's Internet.org program, the company's drones are expected to remain aloft for 90 days, flying at an altitude of 60,000 to 90,000 feet on solar power. While aloft, they will relay Internet signals from service provider ground stations to remote subscribers.

In a blog post, Jay Parikh, VP of global engineering and infrastructure at Facebook, said that the company's researchers in Woodland Hills, Calif., have achieved a breakthrough that advances the state of the art in laser communications.

"They've designed and lab-tested a laser that can deliver data at 10s of Gb per second -- approximately 10x faster than the previous state-of-the-art in the industry -- to a target the size of a dime from more than 10 miles away," said Parikh, noting that the laser system, when complete, will make the company's airborne network possible. 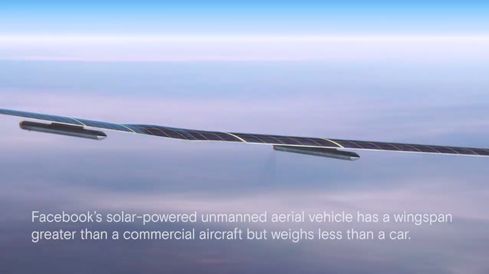 Facebook says its mission is to make the world more open and connected. In furtherance of that goal, the company in 2013 launched an initiative called Internet.org to provide free Internet access in underserved parts of the world through local mobile network operators. In May, the company claimed to have brought 9 million people online in less than a year through the program.

Internet.org, however, has faced significant criticism for providing free access only to select websites, called favoritism by critics who contend the selection violates the principle of net neutrality. In April, several tech companies in India distanced themselves from Internet.org over concerns that the program created a walled garden of favored partners instead of full Internet access. And in May, a coalition of human rights groups wrote an open letter to Facebook CEO Mark Zuckerberg objecting to the program.

"Net Neutrality seeks to ensure that network operators don't limit access to services people want to use, and Internet.org's goal is to provide more people with access," the company explained. "It is good for consumer choice and consumer value. Net neutrality and Internet.org can and must co-exist."

Thomas Claburn has been writing about business and technology since 1996, for publications such as New Architect, PC Computing, InformationWeek, Salon, Wired, and Ziff Davis Smart Business. Before that, he worked in film and television, having earned a not particularly useful ... View Full Bio
We welcome your comments on this topic on our social media channels, or [contact us directly] with questions about the site.
Comment  |
Email This  |
Print  |
RSS
More Insights
Webcasts
5 Ways to Jumpstart AI
[Free Virtual Event] Using Microsoft in 2020 & Beyond
More Webcasts
White Papers
How to Select Rack-Mount Power Distribution Units (PDUs) and Power Strips
Gartner's Solving the Challenges of Modern Remote Access
More White Papers
Reports
2020 Cybersecurity Outlook Report
Global Cloud Proxy Enables VPN Split Tunneling
More Reports

Is the "catch" in the advertising?

How far we have not come from "free tv"

It still better to have some internet than none.

Expect them to give free money? Ofcouse they have to recoup their investment, which mean they have to favor some websites.

Whinners are just whine. Use it or don't use it.
Reply  |  Post Message  |  Messages List  |  Start a Board

I wonder how much Facebook paid for the internet.org domain name. Anyway, it's pretty amazing what FB is doing to provide internet to remote subscribers. Is this service free? What's the catch?
Reply  |  Post Message  |  Messages List  |  Start a Board

interesting info and ideas... I would say this days it depends on the Giants,,, as facebook becoming second Amazon... - how I see it...
Reply  |  Post Message  |  Messages List  |  Start a Board
Editors' Choice
Hot Topics