Facebook rolls out a new ad network, new cloud services, and a new attitude to reassure developers and users.

The last time Facebook held its F8 developer conference, the year was 2011 and the company was focused on consumer-facing innovations such as Timeline, and on providing developers with a way to reach those consumers though its Open Graph API.

Three years later, the world has gone mobile and Facebook is trying to reset its relationship with developers and rebuild trust with consumers. Once focused on large makers of Web games such as Zynga, Facebook is now courting a broader range of mobile developers with the promise that it can help them build, grow, and monetize their apps while also respecting app user privacy. It is pitching itself as infrastructure that works across all the major platforms.

"Our goal with Facebook is to build the cross-platform platform," said Facebook CEO Mark Zuckerberg at F8 on Wednesday. 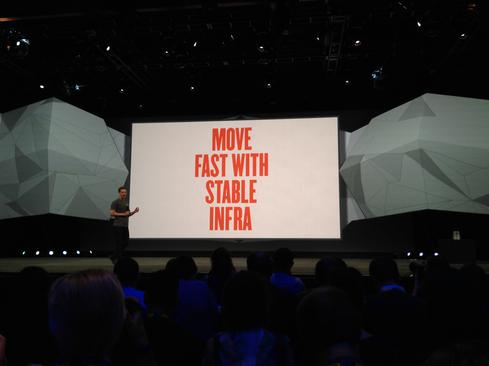 Zuckerberg announced a two-year stability guarantee for core APIs, API versioning, and an SLA promising a response to major bugs in 48 hours or less. For developers, this is huge -- developers don't want to fix their apps every other week because a backend service provider decided to change something without warning. They want the services they've integrated to work consistently and predictably.

As Facebook engineering director Vladimir Fedorov pointed out in a post-keynote interview, "move fast and break things" might have worked for websites, where fixes could be pushed quickly. But it fails with mobile apps, where the lag between code fixes, app submission, app approval, and the installation of the update could be a matter of months.

More surprising still, Zuckerberg announced that Facebook Login, the ubiquitous blue button that allows third-party apps and websites to use Facebook login credentials, will support anonymous login. Though Facebook Login has been a boon to many apps, relieving developers of the burden of implementing a secure login system and of convincing users that they need yet another user ID and password, it can deter app usage.

"We know that some people are scared of pressing this blue button," said Zuckerberg. "It's some of the most common feedback we receive."

This is a remarkable turnabout for Facebook, which still requires that users identify themselves using their real names. And it puts pressure on Google, which has been trying to promote adoption of its alternative authentication mechanism, Google+ Sign-In, and has also insisted on real names for Google+ accounts.

Facebook has also redesigned the way apps ask for permission to use user data, giving users control over specific permissions. This will go a long way toward making people feel more comfortable using apps with Facebook services. And Facebook introduced App Links, an open source cross-platform library that lets developers create deep links to other apps. This has the potential to change the way people engage with apps and mobile content.

To help developers grow their businesses, Facebook debuted a system called Message Dialog for iOS and Android to allow people to share app content through Facebook Messenger. It also launched a Mobile Like Button, a program called FbStart to provide promotional services from partners, and Send to Mobile, a way to send an app to one's phone from a website with a Facebook Login.

Finally, Facebook debuted the Audience Network, a way for advertisers to extend their Facebook ad campaigns to mobile apps.

At the conclusion of the keynote, Zuckerberg turned comtemplative. His 30th birthday is approaching. Gone was the zeal to encourage people to share everything all the time. In its place was a more accommodating attitude.

"We want to make sure that we put people first in all of the different products and experiences we ship," he said.

Thomas Claburn has been writing about business and technology since 1996, for publications such as New Architect, PC Computing, InformationWeek, Salon, Wired, and Ziff Davis Smart Business. Before that, he worked in film and television, having earned a not particularly useful ... View Full Bio
We welcome your comments on this topic on our social media channels, or [contact us directly] with questions about the site.
Comment  |
Email This  |
Print  |
RSS
More Insights
Webcasts
Securing and Monitoring Networks in the 'New Normal'
How Elite Analyst Teams are Transforming Security with Cyber Reconnaissance
More Webcasts
White Papers
A Technical Deep Dive on Software Exploits
SANS 2021 Cyber Threat Intelligence Survey
More White Papers
Reports
2020: Threats in Review
How Data Breaches Affect the Enterprise (2020)
More Reports

@jgherbert exactly! I do wonder if the apps cease to get information of that sort from users, will they stop offering their services for free? Generally, the free ones are the ones that collect the most data, so you are paying for your app with your information, and that cost may be much higher than the couple of dollars that apps tend to sell for.
Reply  |  Post Message  |  Messages List  |  Start a Board

Agreed. I feel kind of dirty allowing the app to access my friend's information as well, like I'm selling them out. It's so unnecessary.

At least, selfishly it is. Of course, this is normally free apps that want the data, and as the saying has it, if you're not the customer, you're the product, so I guess that's the pay off. That makes it all the more interesting that an anonymous login is a possibility.
Reply  |  Post Message  |  Messages List  |  Start a Board

@jgherbert I've given up on countless apps b/c they required a FB log-in that they said they could mine not just for my info but the info of all my friends.
Reply  |  Post Message  |  Messages List  |  Start a Board

Very informative. I think they have succeeded for some extent on these developments for mobile and other related devices.
Reply  |  Post Message  |  Messages List  |  Start a Board
Editors' Choice
Hot Topics