Smartphones accounted for seven of eight devices shipped in the US during the first quarter, with Apple and Samsung leading the way, research says.

Americans have moved past the feature phone. Only 13% of the handsets shipped during the first quarter were traditional cellphones -- those with real buttons and basic operating systems. The remaining 87% were all smartphones. Apple and Samsung chewed up the bulk of smartphone shipments, and Android-based LTE devices are selling big.

The data, which comes from Counterpoint's Market Monitor quarterly tracker program, shows that smartphone makers shipped 33 million devices in the US during the first three months of the year. While the US smartphone market grew only 7% on an annual basis, it has become the dominant segment in handsets.

As a platform, Android accounted for 59% of all smartphones shipped during the first quarter. That means approximately 19.47 million units. Windows Phone grew to 4% of the US market, which makes for about 1.32 million units. Counterpoint didn't offer data points for iOS and BlackBerry's shares of the market. Other analyst firms show that BlackBerry has dropped to 3% or below.

Americans are adopting LTE en masse. Three out of four smartphones shipped during the first quarter were LTE smartphones. Together, Apple and Samsung captured more than 70% of all LTE shipments, according to Counterpoint. All four national carriers have widespread availability of LTE service. AT&T and Verizon currently have the largest LTE footprints.

Breaking down handset sales by carrier reveals some interesting trends. 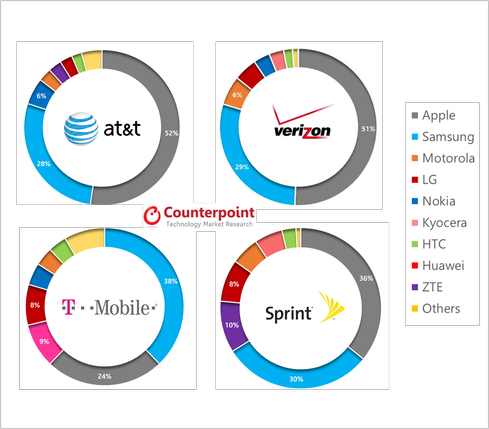 And the top seven phone makers at Verizon Wireless were: Apple (51%), Samsung, (29%), Motorola (6%), LG, Nokia, Kyocera, and HTC. It's not surprising to see Motorola place higher than other phone makers within Verizon. Verizon is the only carrier that still sells Motorola's "Droid" branded hardware.

It's good to see that LG still ranks with US smartphone buyers. The company is prepared to debut the G3 smartphone next week, which will be its main competitor against the Samsung Galaxy S5 and HTC One for the remainder of the year.

Kyocera and ZTE's presence on these lists points to the still-active market for low-cost devices. Most of the hardware made by those two companies sells for $200 or less at full price, and is often free with a contract. Carriers charge about $200 for high-end devices when customers sign two-year agreements, or about $26 per month when purchased with an installment plan. With companies such as Kyocera and ZTE filling in the bottom of the market with inexpensive devices, it's a wonder the feature phone has stuck around at all.

Counterpoint didn't provide any guidance on when we might see the feature phone disappear entirely, and the devices probably won't. A small market will likely remain in place indefinitely for phones that do one thing and one thing only: make phone calls.

I can't say spectrum monopoly has discouraged smartphone innovation. At least not yet. Smartphones are evolving almost too fast. Think of the typical smartphone features now compared to five years ago. But at some point, data plan prices will become unsustainable. I don't mind paying the $90 a month because my smartphone is fun to use and a constant presence in my life and Verizon has great service where I live. But if innovation levels out and prices keep creeping up (likely because of tied up spectrum), I'll sing a different tune. I just haven't seen that yet.

I wonder what portion of the 13% feature phones are disposables, the kind you use for a while and then dump.
Reply  |  Post Message  |  Messages List  |  Start a Board

Now if the FCC would only get serious about freeing up spectrum in a way that will lower the cost of data plans and encourage innovation. I believe spectrum should be seen as a public resource that can be taken, by eminent domain if necessary, from private entities that are sitting on bandwidth. Meanwhile the FCC needs to be crystal clear about what will be offered in the upcoming auction and how it plans to let smaller providers have a shot at spectrum.
Reply  |  Post Message  |  Messages List  |  Start a Board
InformationWeek Is Getting an Upgrade!