Ford is making the SYNC 3 platform available on all of its 2017 model-year vehicles, with a host of popular applications on tap. It's also a huge opportunity for Google's Android Auto and Apple's CarPlay platforms.

Ford is moving its connected car platform forward with the July 25 announcement that all 2017 model-year Ford cars, SUVs, light trucks, and electrified vehicles will offer the SYNC 3 voice-activated communications and entertainment system with Google's Android Auto and Apple's CarPlay platforms.

The automaker plans future over-the-air updates through WiFi that will help ensure drivers can keep up with the latest technology, and noted popular applications such as Spotify, Pandora, AccuWeather, and AAA member services have been added through SYNC AppLink.

SYNC 3 features updated hardware and software for better performance, and additional conversational voice recognition capabilities to help drivers connect to their smartphone and access a variety of features, including hands-free phone calls and navigation.

Android Auto provides information, including Google Maps, Google Play Music, and other apps that are projected onto the SYNC screen. The process allows for the integration of the smartphone into the car. Google voice search answers any questions customers may have while driving.

CarPlay, which is compatible with Apple's iPhone 5 and later models, works by plugging in the iPhone through a USB outlet. The CarPlay interface then appears on the touch screen.

In addition, CarPlay features Siri voice control. It integrates an iPhone with the car's built-in display and controls. 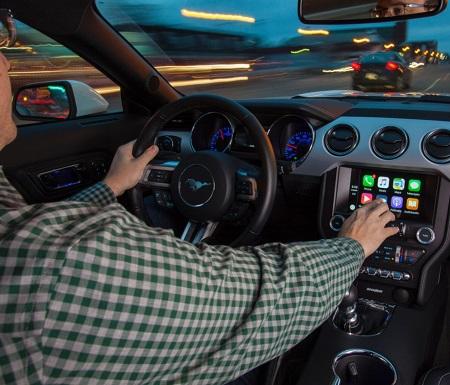 Ford's Escape, Fusion, Mustang, and Explorer vehicles are already available as 2017 models at dealerships. Others, like the F-150, the Focus, the Edge, and the 2017 Super Duty, will arrive later this year.

"Ford's promise that every new model now ships smartphone-ready is huge," Jeffrey Hannah, director of North America for global automotive technology research firm SBD, wrote in the announcement. "Ford is not taking the traditional approach of introducing CarPlay and Android Auto on a few piecemeal models or as an expensive option on luxury vehicles only."

The carmaker also runs the Ford Research and Innovation Center in Palo Alto, Calif., where mechanical engineers like Jennifer Brace focus on learning about customer needs and how they influence the user interface in Ford cars.

Brace's team of user experience researchers conducts studies on far-reaching technologies like autonomous driving, connectivity, and data analysis -- all of which have the potential to be integrated into user vehicles.

The company uploaded a short video to YouTube featuring footage of Ford's self-driving fleet of Fusion sedans cruising the wintery roads of Michigan.

In April, a consortium of technology and automotive titans, including Google, Ford, Volvo Cars, Uber, and Lyft, announced the formation of the Self-Driving Coalition for Safer Streets in a move to accelerate federal regulations around the move toward driverless cars.

The coalition aims to work with government agencies, civic groups, and businesses to gain acceptance and support in prompting the federal government to adopt laws that allow the use of driverless cars on the nation's highways and roads.

Nathan Eddy is a freelance writer for InformationWeek. He has written for Popular Mechanics, Sales & Marketing Management Magazine, FierceMarkets, and CRN, among others. In 2012 he made his first documentary film, The Absent Column. He currently lives in Berlin. View Full Bio
We welcome your comments on this topic on our social media channels, or [contact us directly] with questions about the site.
Comment  |
Email This  |
Print  |
RSS
More Insights
Webcasts
Cybersecurity Risk Management
Managing a Hybrid Cloud Infrastructure
More Webcasts
White Papers
2020 SANS Enterprise Cloud Incident Response Survey
The Top 5 Mistakes Everyone is Making in Vulnerability Remediation
More White Papers
Reports
Dark Reading Report: Battle for the Endpoint
Assessing Cybersecurity Risk in Todays Enterprises
More Reports