Google Apps for Work customers will soon be able to try Inbox by Gmail.

Inbox by Gmail, Google's attempt to make email messages more manageable, will be available in March to a limited number of the company's business customers.

Google Apps for Work administrators can email [email protected] to apply to participate in the early adopter program. Alex Gawley, director of product management for Gmail and Inbox by Gmail, said in a blog post that Google wants organizations that: will use Inbox as their primary email client at work; have employees who use mobile email heavily; and want to partner with Google on user studies. Gawley said Google plans to work closely with these early adopter companies before expanding its program over the coming months.

Launched in October through a limited number of invitations, Inbox aspires to make communication via email more productive. "Inbox wasn't created to reinvent email. Inbox was created to help you reinvent the way you get things done," Gawley writes.

Inbox organizes email into related groups (Bundles) to make messages more manageable, and presents important data from messages (Highlights) more prominently. It lets users create their own Reminders and will attempt to augment Reminders and incoming emails with contextual data called Assists. For example, a restaurant reservation email might receive an Assist in the form of a Google Maps graphic, in order to enhance the utility of the message. 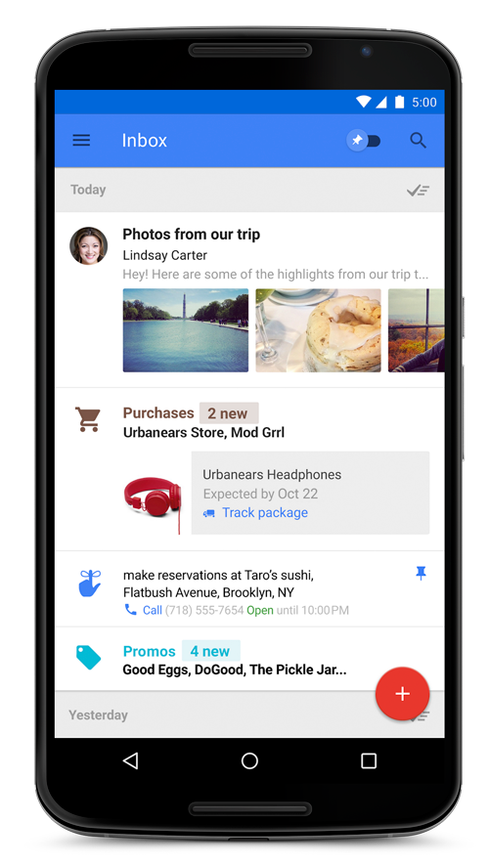 A Google spokesperson declined to provide data about Inbox usage, but said, "We've been really happy with the response so far."

As a means of surfacing important data in email messages that might otherwise remain hidden -- flight departure times, for example -- Inbox does well. But it may not immediately appeal to those who have grown comfortable with lists of messages sorted by time. Collapsing messages into groups makes the inbox less cluttered, but it also makes the whereabouts of older messages less obvious. Inbox assumes people will use the search box, rather than visual scanning, to find messages.

Email remains the most popular tool for online knowledge workers. The Pew Research Center in December published a study that found 61% of survey respondents said email is "very important" to their jobs, making it more significant than the Internet, landline phones, or mobile phones (never mind that the Internet is a prerequisite for email). Among those taking the Pew survey, 46% indicated that email made them more productive, compared to 7% who said the opposite.

Google Inbox may be visually and functionally appealing, but the company now has to demonstrate through user studies that Inbox enhances productivity.

Thomas Claburn has been writing about business and technology since 1996, for publications such as New Architect, PC Computing, InformationWeek, Salon, Wired, and Ziff Davis Smart Business. Before that, he worked in film and television, having earned a not particularly useful ... View Full Bio
We welcome your comments on this topic on our social media channels, or [contact us directly] with questions about the site.
Comment  |
Email This  |
Print  |
RSS
More Insights
Webcasts
Nip Ransomware in the FUD: Detecting Attacks Pre-Encryption
Don't Miss This Cybersecurity Virtual Event
More Webcasts
White Papers
Insider Risk Management: A Better Way to Prevent Data Leaks
Trustwave Global Security Report
More White Papers
Reports
Building the SOC of the Future
The Malware Threat Landscape
More Reports
Copyright © 2021 UBM Electronics, A UBM company, All rights reserved. Privacy Policy | Terms of Service