Google joins a list of tech companies, including Facebook, that are taking to the skies to bring the Web to far-flung corners of the world.

Search giant Google is looking to connect developing economies to the Web with the aid of giant floating balloons that function like WiFi hotspots in flight -- part of an endeavor called Project Loon. As part of this effort, the company announced that Indonesia's top three mobile network operators, Indosat, Telkomsel, and XL Axiata, have agreed to begin testing Project Loon's balloon-powered Internet capabilities over Indonesia in 2016.

From Sabang all the way to Merauke, many of Indonesia's people live in areas without any existing Internet infrastructure, so Google is hoping that over the next few years Loon will be able to partner with local providers to put high-speed LTE Internet connections within reach of more than 100 million currently unconnected people, and provide enough speed to read websites, watch videos, or make purchases.

"In Indonesia today, only about 1 out of every 3 people are connected to the Internet," Mike Cassidy, vice president of Project Loon, wrote in a blog post. "And even though most of their connections are painfully slow, they're doing some pretty incredible things. Soon we hope many more millions of people in Indonesia will be able to use the full Internet to bring their culture and businesses online and explore the world even without leaving home."

Google uses software algorithms to determine where its balloons need to go, then moves each one into a layer of wind that is blowing in the right direction. By moving with the wind, the balloons can be arranged to form one large communications network. 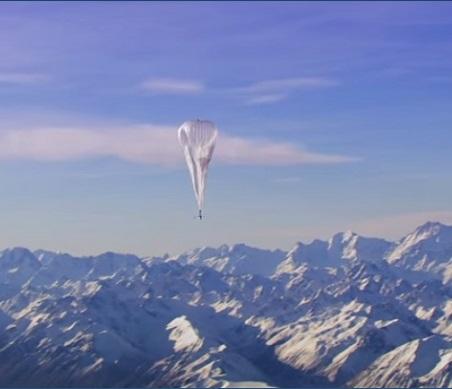 Loon's balloon envelopes are made from sheets of polyethylene plastic. They are 50 feet wide and 40 feet tall when fully inflated.

The company's plans for the country go far beyond Project Loon -- Android One phones are helping to make smartphones more accessible in a place where most people first access the Internet on a mobile device.

Google is also working to ease the use of data with features sure as Search Lite, which streamlines search so pages load more quickly, or by optimizing Web pages so that they require less data to load.

Indonesia is one of the first countries where YouTube users can take videos offline to watch later during periods of low or no Internet connectivity.

In August, Facebook announced it is ready to begin testing a full-scale version of its Aquila drone, one of a projected fleet of drones designed to provide limited Internet service to the estimated 10% of the world without reliable network access.

Once deployed for normal operation in support of Facebook's Internet.org program, the company's drones are expected to remain aloft for 90 days each, in a relay, flying at an altitude of 60,000 to 90,000 feet on solar power.