The Apple Watch release in early 2015 will set the stage for wider enterprise adoption of wearables. Here are some scenarios to prepare for.

Wearable devices are slowly but surely making their way into the enterprise.

Forrester asked 2,045 technology decision makers to rank the importance of having a strategy in place to support wearable devices over the next 12 months. Over half reported that wearables were a priority, with 32% replying that wearables are a "critical" or "high" priority.

[The enterprises is the place for wearables innovation, but challenges loom for CIOs. Read Wearables In The Workplace: 3 Realities]

2015 will be a transition year, with IT leaders facing three different wearables scenarios:

The Apple Watch factor
Even as technology managers turn their attention to wearables, Apple's plans to enter the fray in a big way in early 2015 with the Apple Watch will heighten the sense of urgency and awareness.

Apple has a knack for catching emerging waves of technology growth at the right time. The company looks to do the same with wrist-based wearables. In 2014, 42% of online U.S. adults showed interest in purchasing a wrist-based wearable – up from 28% in 2013, and leading all other body locations (see figure below). FitBit, Jawbone, and Samsung have all helped incite this growing interest, but Apple Watch has the best chance of turning wearables into a mass market category. 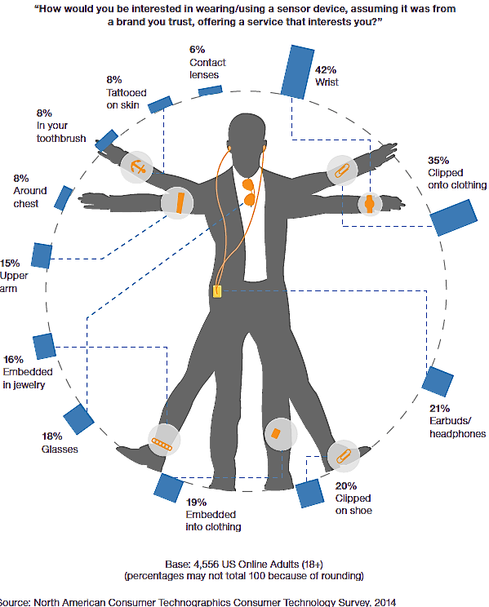 Why is Apple so successful at building new product categories? One reason is its ability to build and extend its ecosystem of partners to create value for customers.

The wearables ecosystem will be built not by tech vendors alone, but by banks, retailers, hotels, hospitals, and brands. The planned Apple Watch app for the W Hotels, for example, will allow customers to check in to the hotel, open their hotel room doors, and pay for goods and services with Apple Pay. Much as Disney has done with its MagicBand wearable, Apple Watch can be

J.P. Gownder is a Vice President and Principal Analyst at Forrester, serving infrastructure and operations professionals. He collaborates with other analysts to create the I&O workforce enablement playbook, which helps companies serve a more mobile workforce. View Full Bio
We welcome your comments on this topic on our social media channels, or [contact us directly] with questions about the site.

I'm eager to see what impact the Apple Watch has on the market. It could have a game-changing effect but could possibly land with a thud given how other smartwatches have been received. Regardless, wearables will flourish slowly but surely. There are just too many opportunities to streamline the experience for both employee and customer.
Reply  |  Post Message  |  Messages List  |  Start a Board
Editors' Choice
Hot Topics