Intel's Core M chips will make Windows tablets lighter and thinner than ever, while its "Devil's Canyon" chips bring the speed.

Whether you're a desktop power user or an on-the-go pro who wants the thinnest laptop available, Intel's new chips might be just what you've been waiting for. Built using a cutting-edge 14-nanometer fabrication process, the power-efficient Core M family will soon fuel a range of tablets and 2-in-1 PCs slimmer and lighter than any currently on the market. The Core K processors, meanwhile, are the first to offer a base frequency of 4.0 GHz on all four cores. Intel president Renee James unveiled the pair of processor lines during a keynote at the Computex trade show in Taipei, Taiwan.

The Core M line plays an important role in Intel's goal to be a bigger mobile player. The most popular tablets traditionally run on ARM chips, which have allowed for thinner designs and better battery life than Intel offerings. But Intel has fought back with not only improved versions of its mobile-oriented Atom line, but also the Core M, which boasts much of the Atom's mobile-friendliness but maintains PC-level performance.

The Core M line ushers in Intel's fifth-generation Broadwell processors. The new family, as mentioned, is built using a 14-nanometer process, which enables Intel to create smaller, more energy-efficient chips. The Haswell processors inside most today's new PCs and Windows hybrids rely on older 22-nanometer technology. Intel claims Core M devices will offer better performance even though the chips consume up to 45% less energy and generate up to 60% less heat. Intel declined, however, to estimate how much Core M might improve battery life.

The low-heat, energy-conscious design should allow manufacturers to produce fanless devices. Most of today's thinnest 2-in-1 PCs -- such as the Surface Pro 3, which was touted at its introduction as the thinnest, lightest Core-based device in history -- need to make room for a small fan. 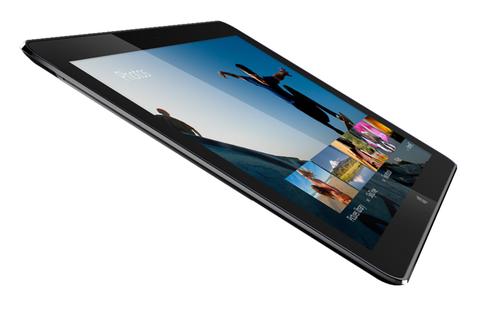 Intel showed off the M processor with a prototype 2-in-1 tablet nicknamed Llama Mountain. At 7.2 mm thick, the device is thinner than an iPad Air but offers a much larger screen -- 12.5 inches. It weighs more than the iPad, but is still light at 1.5 pounds -- lighter, in fact, than the similarly sized Surface Pro 3.

As a reference design, Llama Mountain is intended to guide Intel's OEM partners and will not itself reach the market. Nevertheless, the Asus Transformer Book T300 Chi, also showcased at Computex, hews close to Intel's prototype. One of the first devices to use a Core M chip, it is only 7.3 mm thick in tablet mode, and only 14.3 mm thick when docked into its keyboard base -- thinner than a MacBook Air. The T300 Chi also boasts a 12.5-inch, 2560x1440-pixel screen. The Asus 2-in-1 and other Core M devices are expected to hit the market later this year.

The Asus Transfomer Book T300 Chi will use a fifth-generation Intel Core chip.

But not all users value mobility and sleek, thin devices -- some simply want all the computing muscle they can get. For this second group, Intel introduced the Intel K line. A new version of Intel's Haswell processor family, the K chips will be available in both i5 and i7 options, and will deliver up to 4-GHz base speeds on all four cores. Today's Intel Core chips can reach this frequency only in bursts while in Turbo mode. Codenamed "Devil's Canyon," the K processors will begin shipping this month.

Michael Endler joined InformationWeek as an associate editor in 2012. He previously worked in talent representation in the entertainment industry, as a freelance copywriter and photojournalist, and as a teacher. Michael earned a BA in English from Stanford University in 2005 ... View Full Bio
We welcome your comments on this topic on our social media channels, or [contact us directly] with questions about the site.
Comment  |
Email This  |
Print  |
RSS
More Insights
Webcasts
Cybersecurity's Next Wave - What Every Enterprise Should Know
ROI and Beyond for the Cloud
More Webcasts
White Papers
A Technical Deep Dive on Software Exploits
SANS 2021 Cyber Threat Intelligence Survey
More White Papers
Reports
Assessing Cybersecurity Risk in Todays Enterprises
Email Security Threat Report 2020
More Reports

Apple got better battery life out of the fourth-generation chips than almost anybody, so I too am curious to know what they could do with Broadwell processors. Then again, there's been some online chatter than Apple might actually stick an A8 processor in its alleged fanless MacBook. Take that with an appropriate grain of salt, but it would be an interesting development.
Reply  |  Post Message  |  Messages List  |  Start a Board

These chips will be used in a next generation of sleek new products. Today's sleek and chic will start to look clunky.
Reply  |  Post Message  |  Messages List  |  Start a Board

I am more interested in Apple and would like to see what Apple will do with the new chip. Another thing I would like to know that, how much energy it will consume? How long the battery will last? Did it have some improvements from energy consumption perspective?
Reply  |  Post Message  |  Messages List  |  Start a Board

Intel runs ads for "Intel tablets." Most of them don't even bother to talk about an operating system-- just the difference it makes to have "Intel inside." So they're trying to grab some consumer mindshare. Not sure how much traction they're gaining. That said, I think that even if the new chips don't grab attention, they'll enable new devices that do-- e.g. 12-15-inch hybrids and tablets that are thinner and lighter than virtually anything on the market, and that almost all have near-Retina screen density.Hopefully they're not all $700+. I could see the cheaper tablets remaining ARM and Atom.

Although I won't lie-- when I saw the new chips, I was less interested in, say, the Asus hybrid than in what Apple might do with these and the mythical 12-inch fanless MacBook Air that's been in the rumor mill for a while.
Reply  |  Post Message  |  Messages List  |  Start a Board

What percentage of tablet buyers do you think are even aware of the chip, mugh less make a selection based on that information? I'm betting it's a minority. Do you think Intel  plans to try and change that, to market its silicon as better than offerings from AMD and ARM?
Reply  |  Post Message  |  Messages List  |  Start a Board
Editors' Choice
Hot Topics