The rumored 12.9-inch iPad Pro gets pushed back as Apple determines which features are best for enterprise users.

Apple has reportedly told suppliers to hold off on production of a larger-screen iPad, also called the iPad Pro, writes the Wall Street Journal. Manufacturing, which was slated to begin in the first quarter of 2015, has been rescheduled for September.

Reports on the cause of delays differ. A Bloomberg source claims that the late start is related to the supply of display panels. WSJ, on the other hand, says that Apple is still grappling with capabilities and designs to suit its business audience.

The latter argument seems more believable, especially given that the tablet market has seen some serious decline in recent months. Apple's iPad line has experienced a downward trend for four straight quarters. The company's larger iPhone 6 and iPhone 6 Plus, which put Apple on top of the smartphone market last quarter, are competition.

The end of 2014 signified the tablet market's first decline since 2010. Apple continued to lead with 21.4 million iPads sold, but that number was a 17.8% decline from its year-end sales in 2013. Despite a larger iPad lineup and lower entry-level price point, the company couldn't generate enough consumer enthusiasm to spark sales.

Now CEO Tim Cook is looking to bring new life to Apple's tablet offerings. iPad devices are currently 9.7 inches, with the mini measuring 7.9 inches. A larger device could be popular, especially within the enterprise market.

Apple has been trying to attract business customers, a strategy boosted by its growing partnership with IBM. The two recently launched a collection of enterprise-focused apps catering to the financial, retail and airline industries.

The problem is, size alone won't be enough to spur enterprise iPad sales. If Apple intends for business users to replace laptops with tablets, it'll have to provide greater functionality. 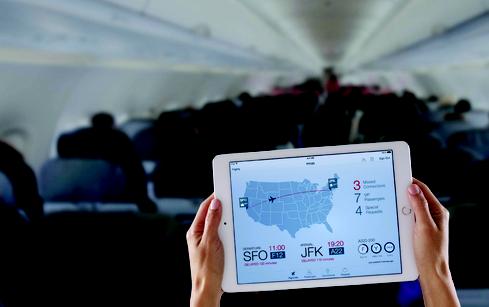 New iPad features may include USB ports and USB 3.0 technology, a faster upgrade to the current USB port that transfers data at 10 times the original speed, reports WSJ. The enhanced model could prove very useful when transferring large amounts of data. It would be a definite improvement upon the current iPads, which don't offer any USB support.

In a letter to Tim Cook last year, billionaire activist investor Carl Icahn demonstrated his support for a larger iPad, claiming that such a device could reinvigorate the product line.

"After a disappointing FY 2014, we believe the iPad will reaccelerate growth next year, especially if Apple, as rumored, offers a larger screen 12.9" iPad in FY 2015," Icahn wrote. He also claimed that improvements to the current iPad devices, in addition to Apple's partnership with IBM, would facilitate growth.

Kelly Sheridan is the Staff Editor at Dark Reading, where she focuses on cybersecurity news and analysis. She is a business technology journalist who previously reported for InformationWeek, where she covered Microsoft, and Insurance & Technology, where she covered financial ... View Full Bio
We welcome your comments on this topic on our social media channels, or [contact us directly] with questions about the site.
Comment  |
Email This  |
Print  |
RSS
More Insights
Webcasts
Monitoring the Invisible - Digital Experiences in a Zero Trust World
Fact or Fiction? The Truth About Cloud Native Security
More Webcasts
White Papers
Formulating a Robust Pivoting Methodology
Business Continuity Program Best Practices Checklist
More White Papers
Reports
State of the Intelligent Information Management Industry in 2021
Gartner's Top 9 Security Trends in 2020
More Reports

True, Apple cannibalized the iPod when it integrated music into the iPhone. They had to know that larger iPhones would hurt iPad sales. I think you're right - the key here is to determine which features make the iPad stand out from the iPhone and focus on developing those.
Reply  |  Post Message  |  Messages List  |  Start a Board

It's much better to carry all your devices in a bag, instead of looking like a tech marsupial. :D

Well, not even the iPad mini is good to put it in your pocket. Why people want to put everything in their pocket? That's why there is a huge bag market now especially thought for carrying devices, for both men and women. And, the iPad Pro has been thought for meeting enterprise needs.

Why would someone want to watch a movie on a smartwatch? And yes, you can zoom in.

@Pedro: Haha! apple clothes designed specifically to carry all your apple devices. I love the idea! We can all walk around looking like hikers with big pocketed cargo pants.
Reply  |  Post Message  |  Messages List  |  Start a Board

They're not that much bigger than the Samsung Galaxies, are they?

As for that bending controversy...I thought we *wanted* bendables!  ;)
Reply  |  Post Message  |  Messages List  |  Start a Board

I am very pro-smaller devices. They fit better in my hand, I'm less likely to drop them, and I can save cash on a shopping spree for new (and likely very pricey) Apple fashion. I wonder what sort of appeal the small-screen Apple Watch will have to those who prefer larger smartphones. Will Apple start looking into bigger smartwatches too? When will the madness end?
Reply  |  Post Message  |  Messages List  |  Start a Board

Ha! You know, there are enough massive Apple fans out there to make something like iClothes sell big. Now I have to wonder whether clothing designers ever take the growing size of smartphones into consideration... something I never thought about before.
Reply  |  Post Message  |  Messages List  |  Start a Board

@soozyg same here. A big screen is great for productivity, but I can't get as much done without a keyboard. Making the iPad bigger is only half the solution.
Reply  |  Post Message  |  Messages List  |  Start a Board

@vnewman2 I don't own one, but that's the first thing that struck me about the 6 plus - it's huge! I know giant smartphones are a big trend but that doesn't seem like it would fit comfortably in one hand.. or in a pocket, for that matter.
Reply  |  Post Message  |  Messages List  |  Start a Board
Page 1 / 2   >   >>
InformationWeek Is Getting an Upgrade!