iPhone 6: Don't Judge It By Its Cover - InformationWeek

Taller than a Galaxy S5. Tougher than Gorilla Glass. Softer contours than the iPhone 5. But it's what's inside that really counts.

The rumor mill has focused on the physical specs of the upcoming iPhone 6. But come Tuesday, when the new device is revealed, the big story will be about what's going on inside. See, the iPhone 6 is the inaugural delivery vehicle for iOS 8, which is laying the groundwork for Apple's mobile devices into the next decade.

There are 4,000 new application extensions in iOS 8, which together give developers an unprecedented level of ability to customize their apps. There's also HomeKit, its new smart-home framework, and HealthKit, a health and fitness data service. Spotlight, which is picking up contextual capabilities, will become a more prominent figure in the platform, perhaps alongside or in concert with Siri.

That gives Apple marketers an awful lot to work with as it spins new use cases to entice buyers, a tactic that has become the company's trademark. So which of the myriad capabilities will Apple choose to highlight? It's an important question because, when you get right down to it, how compelling those use cases are will play a far greater role in the new smartphone's success than the hardware itself.

I envision that company marketers will home in on Spotlight's ability to comprehend its surroundings and iOS 8's ability to share information between apps and weave them together with a few of the new features. For example, Spotlight could take a cue from a health-tracking app that your blood sugar is getting low and point out that you're only a few blocks from a chain of bagel shops you frequent. Or it could direct you to a store display that has a sale on batteries because it knows that the ones in your smoke detectors are getting low.

You have to wonder, by the way, why HTC and Microsoft would release their new attack ads pitting Siri against Cortana so close to the iPhone 6 reveal, given that the competition is just a few days from becoming so much more capable. I think they'll come to regret that move. 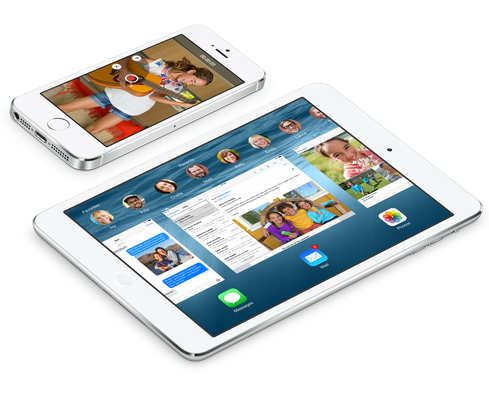 Developers have been working with early releases of iOS 8 all summer, so there's an operational knowledge of what's possible with all the new extensions unveiled at the Worldwide Developer Conference in June. Developers of games, the largest category of apps, are particularly excited by the abundance of new tools at their disposal. Unless Apple is confident that it's identified the next Candy Crush, though, it's unlikely that it would build ads around a new game playing on the iPhone 6. But you never know.

Photo editors also get a lot more capability and control in the new iOS, and a new app that matches some of those capabilities to produce a new must-have photo feature could be a highlight -- especially now that Apple will be playing in the phablet space with a large-screen iPhone. The new time-lapse mode could figure in the iPhone 6's marketing, as well.

Not much has been reported thus far about the audio capabilities of the new iPhone, but I'd be surprised if it didn't include a hefty upgrade. Sound quality has become more important to consumers, and other phone makers have been responding with enhancements like prominently placed speakers and surround-sound capability. Assuming the iPhone gets an audio upgrade, Siri's newfound ability to identify songs, courtesy of Shazam, would pair well with that in Apple's messaging.

But if not, there are plenty of other new capabilities to play up in the new iOS. The iPhone 6, after all, is just the delivery vehicle.

I just hope developers don't have to create and include yet another set of images to accommodate the new screen size, further increasing the space required per app.
Reply  |  Post Message  |  Messages List  |  Start a Board
InformationWeek Is Getting an Upgrade!