50%
Tweet
Microsoft may be prepping a 3D-sensing smartphone that lets users interact with it without touching the screen, according to company research and recent reports.

Microsoft places a distant third in the smartphone race but has still managed to generate optimism around Windows Phone 8.1, especially for Cortana, the OS's Siri-like virtual assistant. Having flexed its software muscles, the company could be turning to hardware next. Evidence is mounting that Microsoft will release a smartphone with 3D-sensing capabilities that could allow users to interact with the device without touching the screen.

In a Microsoft Research video and whitepaper, the company describes a "thin, transparent 3D sensor based on electric field sensing" that "allows for 3D finger tracking and in-air gestures on mobile devices." According to the company's research, when the user's hand comes within the sensor's proximity, it causes a measurable change in the electric field. The smartphone measures these changes and then employs machine learning to map the raw signals into a 3D position.

The research follows a number of recent online reports, all based on anonymous sources, that Microsoft plans to release a 3D-sensing smartphone this fall. Reportedly codenamed McLaren, the device is expected to debut under the Lumia banner and offer Kinect-like "3D Touch" interactions. According to blog Windows Phone Central, these interactions will include a feature called Mix View that allows users to hover their finger over a Live Tile to reveal additional functions. A tile for a given contact might transform to display related phone, email, Skype, and social media options, for example.

Microsoft has indicated before that it's interested in expanding Live Tile functionality. Earlier this year, a Microsoft Research video, which was subsequently deleted, showed tiles that made tools available without forcing users to fully launch the app. A user could tap values into a calculator app without entering full-screen mode, for example -- something that's not possible today. Whether this or "Mix View" shows up in a finished product remains to be seen, but Microsoft clearly believes Live Tiles can do more than launch apps and display updates. 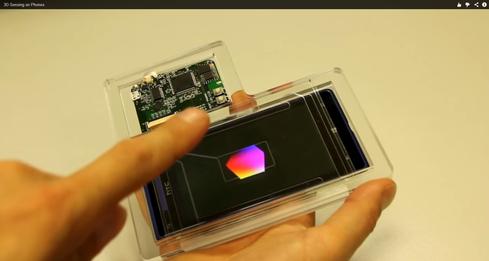 A screenshot from the Microsoft Research video shows a user manipulating a cube via gesture.

Thanks to a barrage of sensors, McLaren will also allegedly be acutely aware of its surroundings. This will reportedly enable users to answer calls by simply bringing the device to their ear, or switch from handset mode to speaker mode by merely placing the phone on a table.

Microsoft's 3D-sensing technology will reportedly be exclusive to Lumia devices, at least initially. When and if McLaren arrives, it will still face competition in the 3D-sensing arena, however. Samsung's Air Gestures feature already enables limited in-air interactions, for example. Later this month, Amazon is expected to debut a smartphone with a 3D, perhaps even somewhat holographic, display.

Michael Endler joined InformationWeek as an associate editor in 2012. He previously worked in talent representation in the entertainment industry, as a freelance copywriter and photojournalist, and as a teacher. Michael earned a BA in English from Stanford University in 2005 ... View Full Bio
We welcome your comments on this topic on our social media channels, or [contact us directly] with questions about the site.
Comment  |
Email This  |
Print  |
RSS
More Insights
Webcasts
Cloud Security Threats Enterprises Need to Watch
Linking, Orchestrating, and Managing Your Enterprise Security Systems
More Webcasts
White Papers
NetFlow vs Packet Data
Definitive Guide to Securing DevOps
More White Papers
Reports
Can You Spare 10-12 Mins to Help Us Out with a Survey on Tech Trends?
Got 7 Minutes? Dark Reading Needs Your Help With Our Survey on Incident Response
More Reports

>What are some of the most intriguing applications that you expect from this sort of tech?

Two-player games where real-world position and obstacles matter. eg: you'll be able to shoot at one another virtually and calculate hits and misses accurately.

Navigation apps for enclosed spaces that are precise.

The ability to place 3D overlays on specific objects. eg: instantly replace a person or object in an image with something else. eg: super-easy photo editing.

Inventory applications: Take a picture, identify products on shelves, see how many more are needed.

Warning apps for bikers...put your phone or a wireless camera on your helmet and track nearby obstacles.

The list goes on and on. Depth information makes so much possible.


I know you're following Project Tango pretty closely. What are some of the most intriguing applications that you expect from this sort of tech?
Reply  |  Post Message  |  Messages List  |  Start a Board

@David that's true! Of course, eating in front of a screen is a very bad habit, but many of us fall into it.
Reply  |  Post Message  |  Messages List  |  Start a Board

Also handy for when you've been eating Cheetos or BBQ.
Reply  |  Post Message  |  Messages List  |  Start a Board

It's Microsoft's version of Project Tango. And I wouldn't underestimate 3D sensing. It enables many new possibilites for applications.
Reply  |  Post Message  |  Messages List  |  Start a Board

@Michael granted it's rather a niche market, but many products cater to particular segments rather than just appealing to all.
Reply  |  Post Message  |  Messages List  |  Start a Board

Good point! I hadn't thought of that. I'll be honest; I'm a little skeptical that the gesture controls described so far will immediately lead to anything transformational. But you have a point-- there's at least one certain market.
Reply  |  Post Message  |  Messages List  |  Start a Board

Germophobes who hate touching surfaces that others may have touched would be happy to have an option that requires no contact.
Reply  |  Post Message  |  Messages List  |  Start a Board
Editors' Choice
Hot Topics