At a time when indie game developers lament the improbability of being able to produce a profitable video game, a startup called Tangible Play may have found an answer.

The company, co-founded by Pramod Sharma, a veteran of Google, and Jérôme Scholler, formerly with LucasArts, has launched its own crowdfunding campaign to produce an iPad game system called Osmo that requires physical components.

Good luck getting anyone to buy your mobile game among the million-plus free apps that are your competition. Gartner in January predicted that by 2018, "less than 0.01% of consumer mobile apps will be considered a financial success by their developers." But people will pay for physical goods, particularly when the product encourages kids to look beyond the mobile devices to interact with the real world. 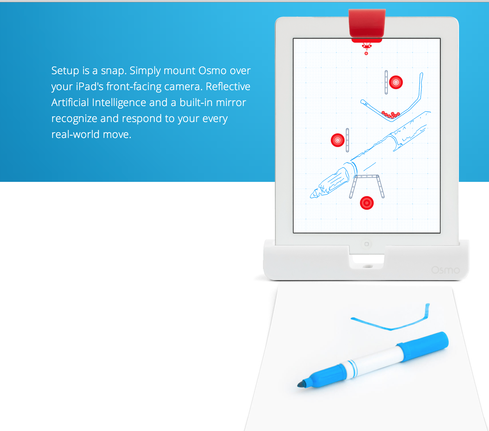 Osmo consists of three components: a mirror that snaps over an iPad's front-facing camera and directs its view down to the surface supporting the tablet, a stand to keep the iPad upright, and two sets of game pieces -- alphabet tiles and shapes. When it ships later this year, it will support three apps -- Newton, Words, and Tangram -- that will be available as free downloads from Apple's App Store.

These apps are designed around interaction between physical game pieces and the virtual game environment. Move a block and it moves on the screen. Spell a word with tiles, and Osmo will see it.

The genius of Tangible Play's approach is that it keeps Apple's fingers out of its potential revenue. Apple asks companies interested in creating certain hardware components that connect to iOS devices to do so through its MiFi hardware licensing program. Companies that comply must pay a confidential royalty to Apple and must abide by a non-disclosure agreement.

Companies that wish to create iOS peripherals without paying Apple have a few options. They can make certain audio products that connect through the headphone jack. Apple does not attempt to control the analog audio stream to or from iOS devices. They can also make Bluetooth hardware. Apple stopped seeking MiFi certification for Bluetooth peripherals back in 2011.

Osmo's interface is optical -- a mirror to redirect the iPad camera -- and it too is outside of Apple's gatekeeping.

Osmo is available for a pre-order price of $49 during the company's crowdfunding campaign and for $99 thereafter. It's supposed to ship this summer. When it does, Apple won't see a dime. But Tangible Play, unlike the majority of struggling mobile developers, will have already taken many orders at a price point that's orders of magnitude above the 99 cents that fewer and fewer app buyers will pay. That's what permissionless innovation looks like.

There are many devices that work with iOS and have a free app, but these apps communicate over an unrestricted channel like WiFi or Bluetooth.

There are also a few games that rely on physical objects and use the iPhone or iPad as a remote (Sphero and Anki Drive come to mind), but again, these apps don't have a hardware interface component.

Osmo is noteworthy because it uses a custom hardware interface -- something Apple tries to limit through its MiFi program -- and weds it to a game (and not a remote control interface like Sphero or Anki Drive).

It is noteworthy particularly in the context of games, which have come under so much pressure to be free and present such a profit challenge to game developers. The existing business models for game apps -- paid, ads, and in-app purchases -- all are problematic and few game companies but the largest can manage this challenge. GE doesn't face this issue with a $500,000 medical scanner.

And Apple's 30% fee for iOS apps qualifies as a tax more than Google's 30% fee because it's mandatory if you want to sell iOS apps (or in-app items). Google's fee is optional, just as Apple's Mac App Store fee is for OS X apps. If you don't want to sell through Google Play, you can distribute your .apk file through other stores (which may not offer a better deal) or via your own website. There is no legal way to sell iOS apps without that fee, just as there's no legal way to sell taxable goods and not pay tax.

As for the Google tax, that's a different article, related to advertising and websites.
Reply  |  Post Message  |  Messages List  |  Start a Board

Thanks for weighing in. I made no comment here on what % would be mild, appropriate, or inappropriate. Of course stores must reap profits. I am always interested in people who push the limits of existing business models in new ways. Tom Claburn has explained this as one example of innovation in that regard.
Reply  |  Post Message  |  Messages List  |  Start a Board

Why not just play word games that let you move tiles around on screen by swiping? Maybe there are other game scenarios yet to come that I'm not visualizing. Interesting way to work around the Apple tax.
Reply  |  Post Message  |  Messages List  |  Start a Board
InformationWeek Is Getting an Upgrade!