0%
Tweet
Along with the Samsung Galaxy S6 smartphone, the company also rolled out Samsung Pay as an alternative mobile payment system to Apple Pay and the iPhone 6.

Samsung also announced important deals with major credit card companies, including Visa, MasterCard, and American Express, as well as financial institutions, such as Bank of America, Capital One, and Chase.

While NFC contactless payments are widely deployed in Europe, the US has yet to shift to EMV Chip security and contactless POS systems and cards. Samsung's decision to incorporate two different contactless systems could give the company a significant advantage in the North American market.

Security will be a different issue.

While EMV contactless solutions use tokenization and one-time approval codes, the MST solution based on LoopPay will transmit the credit card information in the same way a credit card swiped at a payment terminal does. The level of security of each transaction will depend on the issuing bank and the payment terminal.

Like with Apple Pay, users will be required to use fingerprint authentication to start a transaction.

The use of MST -- in my view -- is basically a bridge to make Samsung Pay attractive to consumers in the US, where the road to full EMV and contactless technology has only just started. From the consumers' point of view, Samsung Pay will enable them to tap and pay with the Galaxy S6 at over 90% of retail locations in the US. 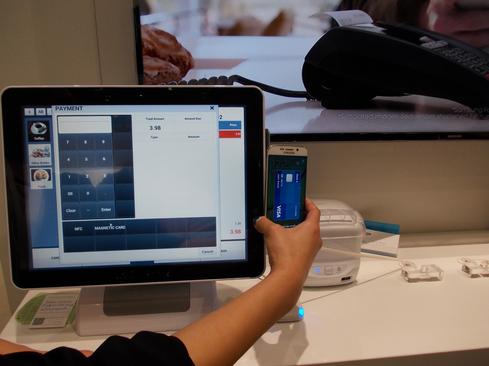 MST will not work in Europe, where EMV chip transactions are the norm and only NFC contactless transactions are allowed. Magswipe is only employed for the non-EMV cards that American travelers use.

Little information is available about the NFC technology used on the Samsung Galaxy S6. NXP declined to comment when I asked them about it this morning. As happened with the iPhone 6, we'll probably have to wait for the Galaxy S6 teardown to discover the NFC chipset embedded in the device.

By combining NFC and MST, Samsung has a significant advantage over its competitors in luring customers to mobile payments. The combination of Galaxy S6's beautiful design, the possibility to pay at standard magswipe terminals in the US, and the simplicity of use will probably attract a large number of early adopters.

The Samsung Galaxy S6 will be available April 10 in 20 countries, and Samsung Pay is scheduled to debut this summer.

Pablo Valerio has been in the IT industry for 25+ years, mostly working for American companies in Europe. Over the years he has developed channels, established operations, and served as European general manager for several companies. While primarily based in Spain, he has ... View Full Bio
We welcome your comments on this topic on our social media channels, or [contact us directly] with questions about the site.
Comment  |
Email This  |
Print  |
RSS
More Insights
Webcasts
5 Steps to Integrate SAST into the DevSecOps Pipeline
Are You Ready for When Cyber Attackers Get In?
More Webcasts
White Papers
Using AI to Power AppSec
Simplify Your App Security
More White Papers
Reports
Can You Spare 10-12 Mins to Help Us Out with a Survey on Tech Trends?
Got 7 Minutes? Dark Reading Needs Your Help With Our Survey on Incident Response
More Reports

It will be very interesting to see what kind of inroads Samsung can make with mobile payments with the S6.   I am a Samsung user and while this model is tempting, I don't think I will be upgrading anytime soon.
Reply  |  Post Message  |  Messages List  |  Start a Board

I had a conversation with the Samsung product manager today. He confirmed a few things:

1. Samsung Pay will be launched this summer in the US and South Korea.

2. The system works with cards from finnancial institutions that have an agreement with Samsung.

3. Both NFC and LoopPay will be active to pay, no need to choose. Tokenization is done by software with LoopPay and by secure element with NFC.

4. European models of Galaxy S6 will not include LoopPay. Samsung Pay will be released in Europe after New Year 2016.
Reply  |  Post Message  |  Messages List  |  Start a Board

The move to contactless is definitely underway, but even if 45% in the USA are there by year-end, that still leaves 55% that aren't. I'm sure a de facto standard will emerge at some point, but until then, a lot of Android users in the USA have important decisions to make about which services to use to balance payment convenience with security.
Reply  |  Post Message  |  Messages List  |  Start a Board

@jagibbons, while I consider LoopPay highly insecure, I believe Samsung strategy is quite smart to fight Apple Pay in the US market. This way people get use to mobile payments and, when the new EMV and NFC contacless terminals are everywhere, they are already used to pay with their phones.

The card payments association expects 45% of US terminals to accept EMV chip technology by the end of the year.

As I mentioned in my article the magstripe technology has no place in Europe and most of world where EMV has been deployed. Here in Barcelona most of the payment terminals are also contactless.

Probably Samsung will save a few bucks and do not include LoopPay on the S6 devices sold in Europe.
Reply  |  Post Message  |  Messages List  |  Start a Board

As someone who lives and breathes PCI compliance on a near-daily basis, I'm both intrigued and frustrated at Samsung's announcement. On the one hand, it is backwards compatible with non-NFC payment terminals that are still very prevalent in the USA. However, more payment options adds more variability in security. Maybe Samsung Pay is vastly superior to Google Wallet or any of the carrier versions of electronic payments on Android devices. More payment options in the marketplace mean more potential attack vectors to grab card data. More payment apps on my device also adds security risk in that there are more targets. There's safety in everyone rallying around fewer options and dedicating resources to making those few payment methods ultra secure.
Reply  |  Post Message  |  Messages List  |  Start a Board
Editors' Choice
Hot Topics