Pew Research Center finds reason to believe that American journalism has a future -- and social media will play a key role.

In its 2014 review of the state of the media industry, the Pew Research Center finds reason to believe that American journalism has a future -- something that hasn't been obvious after years of belt tightening, layoffs, technological changes, and newspaper closures.

New digital media companies have arisen and thrived, many with the help of talented people from traditional media organizations. Entrepreneurs such as Jeff Bezos, John Henry, and Pierre Omidyar are bringing needed investment and the perspective of outsiders to the industry. And there is evidence that social media have become a meaningful channel to reach the young audience necessary to sustain the news industry as the newspaper generation ages.

But the need for revenue has brought change that challenges traditional media practices. Pew's report finds that "the overlap between public relations and news noted in last year's State of the News Media report became even more pronounced." Many online publications now include content that is paid for by commercial advertisers and cannot easily be distinguished from reported stories. Sometimes this sponsored content is even written by staff news writers. The metrics firm eMarketer predicts these "native ads" -- promotional copy dressed up as reported news -- will generate $2.85 billion of revenue this year.

[Has Facebook become overwhelming? Here's how to cut down on the clutter. Read 5 Facebook Spring Cleaning Tips.]

The importance of social media to news is hard to overestimate. The Pew Research Center cites eight findings about social media and their relationship with news that people should take from its report.

1. News matters more on some social media sites than on others.
According to the Pew report, 30% of Americans get at least some news while on Facebook. On YouTube, that figure is 10%. On Twitter, it's 8%. Few users of Instagram and Pinterest get their news there. 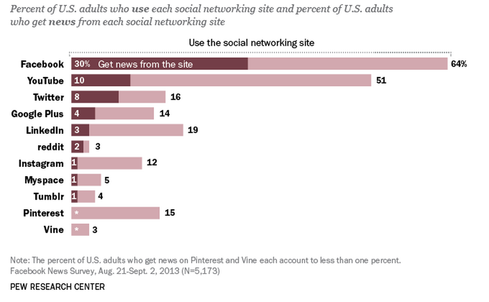 2. Reading news on Facebook is secondary to social interactions.
The report says that 78% of Facebook news users tend to see news while using Facebook for other activities, and that only 34% of Facebook users who read news there bother to Like a news organization or journalist. Facebook is probably not the ideal place for news organizations to develop deep audience engagement.

3. News seen through Facebook covers a wide range of topics.
Though entertainment news is the most commonly seen category among Facebook users (73%), other categories are well represented. Science/technology and business are the two least popular topics, at 37% and 31%, respectively.

5. Twitter represents a passionate community, but its views differ from the mainstream.
As an example, Pew's study notes that, in the days following the 2012 Newtown, Conn., shootings, 64% of Twitter users called for stricter gun control laws. A broader Pew public opinion poll at the time found only 49% of respondents supported that view.

7. The audience for news differs across social platforms.
On Facebook, the percentage of male news consumers is 42%, and the percentage of female news consumers is 58%. On YouTube -- where commenters can hide behind pseudonyms -- the gender distribution is almost reversed: 57% male and 43% female. On LinkedIn, the gender disparity is even more pronounced: 67% male and 37% female. On Twitter, it's an even 50-50 split, but its audience has the highest percentage of young adults: 45% are between 18 and 29, compared with just 18% on LinkedIn. However, LinkedIn has the largest percentage of users with at least a bachelor's degree (64%).

8. Visitors who come to a news website through Facebook or search-related display advertising are less engaged than those who seek the site out directly.
Though Facebook and search might matter for hitting website traffic targets, they don't seem all that helpful for building a long-term, sustainable audience.

Social networking and news clearly have a future together. There's already a startup called Newsle that will send you news about people in your social network. But the results of that hookup can be expected to vary: Social engagement isn't the same thing as a sustainable revenue model.

Thomas Claburn has been writing about business and technology since 1996, for publications such as New Architect, PC Computing, InformationWeek, Salon, Wired, and Ziff Davis Smart Business. Before that, he worked in film and television, having earned a not particularly useful ... View Full Bio
We welcome your comments on this topic on our social media channels, or [contact us directly] with questions about the site.
Comment  |
Email This  |
Print  |
RSS
More Insights
Webcasts
Cybersecurity Risk Management
Advancing the Hybrid Cloud & App Modernization Journey with IBM
More Webcasts
White Papers
2020 SANS Enterprise Cloud Incident Response Survey
The Top 5 Mistakes Everyone is Making in Vulnerability Remediation
More White Papers
Reports
2021 Application Security Statistics Report Vol.2
Key Strategies for Managing New Risks in Cybersecurity
More Reports

LinkedIn has invested a LOT on becoming a news destination, from relaunching LinkedIn Today as Pulse and adding user-generated content with blogs. News seems like a good fit for a professional social network, but like you, I wonder how successful it's been. Does LinkedIn make anyone's list of news outlets?
Reply  |  Post Message  |  Messages List  |  Start a Board

I get my news from a variety of sources: tablet-based magazines, the Sunday paper (yes the actual inky physical paper - i recently went back to it), and also LinkedIn, Twitter, and Facebook. My Facebook news only occasionally comes from friends' likes and shares (though that definitely happens). But the majority comes from just following pubs like NYT and Wash Post on Facebook. I end up reading a lot of good stories just passing through Facebook. I like to balance that approach with the more structured experience of reading magaziness like BusinessWeek and Entertainment Weekly on my tablet. Whatever works for you.
Reply  |  Post Message  |  Messages List  |  Start a Board

#2 rings true for me -- I discover a lot of news on Facebook and Twitter, though I don't log on specifically for that. I'm curious about others' news habits -- are you getting more news from social sites?
Reply  |  Post Message  |  Messages List  |  Start a Board
Editors' Choice
Hot Topics