Using time and location data culled from social media posts or other sources, researchers say they can identify your purchases from amongst anonymized transaction data.

With a handful of social media posts or other geotagged sources of data, researchers have demonstrated that they can identify an individual's purchases from an anonymized set of metadata. In a paper published Friday in Science, researchers from MIT, Aarhus University, and Rutgers show that having just four metadata points that link an individual to a location and/or time -- a Tweet tied to a place or a timestamped receipt, for example -- that individual's credit card transactions can be identified 90% of the time in anonymized database of 1.1 million credit card records.

"A data set's lack of names, home addresses, phone numbers, or other obvious identifiers … does not make it anonymous or safe to release to the public and to third parties," the paper explained. 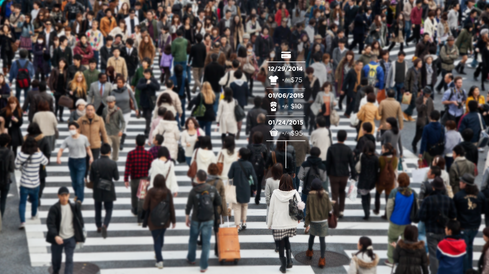 [Are we our own worst enemies when it comes to data security? Read Password Fail: Are Your Workers Using 123456?]

Data is the fuel that powers the knowledge economy, but as the paper's authors point out, the transformational power of data depends on its availability. Such data may become more difficult to obtain if it can be de-anonymized.

This study isn't the first to note the ease with which anonymous data sets can be de-anonymized to identify specific individuals. Researchers found ways to identify people from the AOL search query dataset released in 2006.

A paper published by researchers at the University of Texas at Austin in 2008 describes how the Netflix Prize dataset was de-anonymized. In 2013, one of the MIT paper's authors, Yves-Alexandre de Montjoye, participated in prior work on identifying mobile phone users from four points of spatiotemporal data. That same year, Latanya Sweeney showed that anonymous Personal Genome Project listings can be identified by name using data in public records.

Thomas Claburn has been writing about business and technology since 1996, for publications such as New Architect, PC Computing, InformationWeek, Salon, Wired, and Ziff Davis Smart Business. Before that, he worked in film and television, having earned a not particularly useful ... View Full Bio
We welcome your comments on this topic on our social media channels, or [contact us directly] with questions about the site.
Comment  |
Email This  |
Print  |
RSS
More Insights
Webcasts
Building Asset Management into Your Enterprise Security Strategy
SASE: The Right Framework for Today's Distributed Enterprises
More Webcasts
White Papers
5 Steps to Perimeter-Less Security: Adopting a Zero-Trust Model
Simplify Your Application Security
More White Papers
Reports
The Infoblox Q4 2020 Cyberthreat Intelligence Report
Enabling Enterprise Resiliency Through Cyberthreat Detection
More Reports

Of course, just like the discussions about art, when everything is PII, nothing is PII -- which isn't very promising for appropriate regulatory action.
Reply  |  Post Message  |  Messages List  |  Start a Board

Yet another of many reasons why I almost never geotag or otherwise indicate my location with my posts.

@tzubair: I've experienced the benefits of this firsthand last year when Amex flagged fradulent charge attempts on my account based on the fact that they were inconsistent with my prior purchase history. Im ok with that. I"m also ok with targeted marketing in general because I know that's happening due to the cookies and other tagging that I choose not to turn off.

What frightens me is the idea that my purchase behavior can be lumped into anonymyzed batches and is supposedly de-personalized, but via my own social media statements can still be used by bad actors identify me specifically and, potentially, steal my identity.

It gets even more scary if I start to think about how anonymized health data might be used to be traced back to me.
Reply  |  Post Message  |  Messages List  |  Start a Board

This is seroiusly disturbing and a good wake-up call to any organization that is using meta data (or making meta data available to others). Wait: Isn't that just about EVERY organization, at this point? Shows a significant flaw in our thinking about how we separate PII from other data...potentially all our data is PII. Do you think this will lead to new regulations and practices concerning metadata?
Reply  |  Post Message  |  Messages List  |  Start a Board
InformationWeek Is Getting an Upgrade!