Verizon Wireless today said it will finally launch VoLTE service in the weeks ahead. The offering, based on Big Red's LTE 4G network, will make vast improvements to core services while also adding new ones. Verizon left some key questions unanswered, however, about just how the service will work.

VoLTE, or Voice over LTE, is one of the newest technologies made possible by today's LTE 4G networks. It's been in development for years. After initially planning to launch the service late last year, Verizon delayed the launch several times, indicating several months ago it didn't want to launch VoLTE before it was absolutely sure the service would be robust. It appears Verizon is now sure of the technology.

To access VoLTE, Verizon's smartphone customers will need to update their devices. The update will include Advanced Calling 1.0, the application that powers HD Voice and Video Calling. To connect VoLTE calls, both the caller and the recipient must be on Verizon's LTE network. That means no VoLTE calls from a Verizon phone to an AT&T or T-Mobile phone, at least for now. If one of the Verizon phones wanders out of LTE coverage, the VoLTE call will automatically drop to a standard 3G voice call.

In addition to HD Voice Calling, VoLTE will also include Video Calling. According to Verizon, icons will show when others are available for Video Calling. An HD voice call can be converted to a video call with the push of a button, just as video calls can be reverted to HD voice calls. Verizon claims the user interface of the Advanced Calling 1.0 app is simple and user-friendly.

Perhaps the best part of VoLTE service is that it won't cost Verizon customers a penny more than they are already paying: The service is included with 4G contracts at no extra charge. Verizon did point out, however, that VoLTE voice minutes will count towards subscribers' monthly voice service allotment, and video calls will count towards subscribers' data bucket. According to Verizon, video calls consume about 6 MB to 8 MB per minute. Many of Verizon's customers have unlimited voice minutes, but they'll have to keep an eye on their data usage with the Video Calling feature. 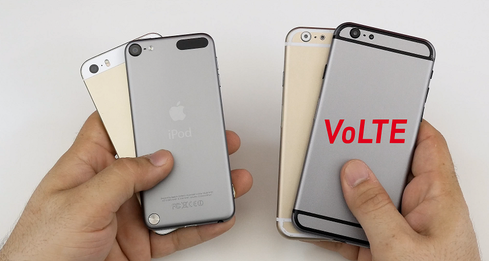 Verizon didn't specify which devices are compatible with the service. Most, if not all, of Verizon's smartphones include LTE 4G, but apparently not all of them have the horsepower to run VoLTE. Expect it to appear first on high-end devices such as the HTC One (M8), LG G3, and Samsung Galaxy S5. Perhaps it will also be available to the iPhone 6, which is expected to launch next month.

The service should be available nationwide, according to Verizon, everywhere its LTE footprint covers. The company said it will launch in the "coming weeks" but didn't give an exact date. (Perhaps Verizon will launch VoLTE with the iPhone 6, which is expected to debut September 9.) InformationWeek will be sure to keep you posted.

After Verizon, T-Mobile has the largest VoLTE offering. T-Mobile's VoLTE is available across its entire LTE footprint, but its LTE coverage is significantly smaller than Verizon's. Further, T-Mobile is offering only HD Voice via VoLTE, not video calling. AT&T also offers VoLTE, but only in a few markets in the Midwest. Sprint has not discussed plans to deploy VoLTE.

Eric is a freelance writer for InformationWeek specializing in mobile technologies. View Full Bio
We welcome your comments on this topic on our social media channels, or [contact us directly] with questions about the site.
Comment  |
Email This  |
Print  |
RSS
More Insights
Webcasts
The Failures of Static DLP and How to Protect Against Tomorrow's Email Breaches
ROI and Beyond for the Cloud
More Webcasts
White Papers
2020 Cybersecurity Report Card
2020 Gartner Market Guide for Network Detection & Response
More White Papers
Reports
How Data Breaches Affect the Enterprise (2020)
Building an Effective Cybersecurity Incident Response Team
More Reports

Isn't Verizon's voice call quality already the best? Why are they trying to rub it in now?
Reply  |  Post Message  |  Messages List  |  Start a Board

Well, if you're the best, then why not rub it in to the competition? Lol. That seems to be how many companies operate these days.
Reply  |  Post Message  |  Messages List  |  Start a Board

HD Voice is another level beyond current call quality for all the providers. I can spend all day on a conference call in Lync, for example, because it supports wideband voice. Spending the same time on a regular phone usually means headaches and tiredness. I'm a huge fan of wideband audio, and getting it on more phones can only be a good thing in my opinion.
Reply  |  Post Message  |  Messages List  |  Start a Board

But from a product development, if it's not something people find value in, you shouldn't do it just to look good compared to competitors. That's how market share gets gobbled up by someone else.
Reply  |  Post Message  |  Messages List  |  Start a Board

Good point. I just don't see it being widespread but for the HD aspect that people really have no understanding of. At least when it comes to voice.
Reply  |  Post Message  |  Messages List  |  Start a Board
Editors' Choice
Hot Topics