Google wants to clear up some misperceptions about Glass. We have our own views on the truth.

Tech's Rich And Famous: Who's Most Charitable?
(Click image for larger view and slideshow.)

Google Glass provides a new perspective on the world, but people have trouble seeing it for what it is: a work in progress.

To push back against misperceptions about its computer-augmented eyewear, Google on Thursday published a list of the Top 10 Google Glass Myths.

"In its relatively short existence, Glass has seen some myths develop around it," Google explained on its Google+ page for Glass. "While we're flattered by the attention, we thought it might make sense to tackle them, just to clear the air."

Yet Google has not addressed perhaps the most important question about Glass: Does it have a future? Technology blogger Robert Scoble, an early fan of Google Glass, published a Google+ post on Wednesday expressing doubts about Google's commitment to the project. Scoble, who thrives on taking provocative positions, said Google's lack of clarity about Glass's intended purpose indicates that Google hasn't made up its mind about how it sees Glass. And in the absence of clear answers, Scoble says technology investors have become reluctant to fund Glass-oriented projects.

Google offered a restrained response. "We always appreciate feedback from everyone -- even Robert -- on how to make Glass better," a company spokesman said in an email. "In the last 10 months we have shipped nine new software updates and made three hardware updates based, in large part, on feedback from our Explorers. We continue to move quickly and are excited by what's coming down the pike. Glass remains a prototype and we'll keep improving it before making it more widely available to consumers."

[Can't afford a Google Glass for the boss's birthday? Buy Your CIO A Gift: 5 Inexpensive Ideas.]

Google has in the past abandoned products that have been slow to take off, like iGoogle and Google Wave. But in attempting to dispel Glass myths, it's clear the company is trying to counter negative public perception. Confronting the problems head-on seems inconsistent with a plan to throw in the towel.

These myths are the ones that worry Google.

1. Glass is the ultimate distraction from the real world.
Google argues that Glass lets you look up and engage with the world rather than staring into a phone or tablet: "Big moments in life -- concerts, your kid's performances, an amazing view -- shouldn't be experienced through the screen you're trying to capture them on. That's why Glass is off by default and only on when you want it to be." 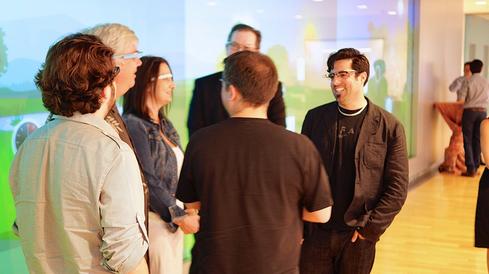 Translation: You can still be human if you use Glass, even if you look like a cyborg.

It's a fair point. But Google isn't going so far as to question whether it's necessary to capture all those big moments in life. Some things in life are best experienced in all their glorious impermanence, unrecorded and unmediated.

2. Glass is always on and recording everything.
"Just like your cellphone, the Glass screen is off by default. Video recording on Glass is set to last 10 seconds. People can record for longer, but Glass isn't designed for or even capable of always-on recording (the battery won't last longer than 45 minutes before it needs to be charged)."

Translation: Read the manual! We've already explained this at length in our Glass FAQs.

Oh, Google. If you had only seen your own 2009 video "What is a browser?" you might have anticipated the inevitability that people would misunderstand Glass. The video is a reminder that not everyone cares about fine distinctions like "off by default" and "on by default." In the real world, people don't even know what a web browser is. They just want stuff that does something useful and they're not inclined to think too deeply about it.

3. Glass Explorers are technology-worshipping geeks.
"Our Explorers come from all walks of life. They include parents, firefighters, zookeepers, brewmasters, film students, reporters, and doctors. The one thing they have in common is that they see the potential for people to use technology in a way that helps them engage more with the world around them, rather than distract them from it."

Translation: If you're having trouble engaging with the world, our technology can help you, nerd. That, and Glass can be useful to anyone who can't spare his or her hands to manage a keyboard or tablet while on the job.

There's a second thing Glass Explorers have in common: A spare $1,500 to join the Explorer club. A better strategy would be to argue that Explorers are, as you suspected, technology-worshipping geeks, but these are the exact people you want testing Glass.

4. Glass is ready for prime time.
"Glass is a prototype, and our Explorers and the broader public are playing a critical role in how it's developed... And, in the future, today's prototype may look as funny to us as that mobile phone from the mid '80s."

Translation: You should see the contact lens we're developing.

Really, we should be grateful to Google for testing Glass in public. The issues it raises about the social expectations of privacy and personal interaction

I agree. But with all of these big eyewear companies signing on as Glass partners, maybe that can change?
Reply  |  Post Message  |  Messages List  |  Start a Board

Re: "Scoble, who thrives on taking provocative positions..."


Well, sure, if you can count being a huge fan of pretty much every technology ever, especially if Google is behind it, can be counted as provocative.

But then, that's what a lot of tech pundits do.  Scoble is just way more committed.
Reply  |  Post Message  |  Messages List  |  Start a Board

I only hope the price isn't stratospheric. Multiply the Google Glass premium times the medical device markup and you have a recipe for a device that will many thousands.
Reply  |  Post Message  |  Messages List  |  Start a Board

Google Glass is a logical extension of the smart phone and tablet computer. It's a mobile device that becomes quite useful when connected to servers on the Internet. Trying to halt the spread of Google Glass is a less rewarding occupation than standing on the beach and trying to stop the tide from coming in. But some rules of etiquette might help, such as don't walk into a punk bar with the lights on your Google Glass flashing.
Reply  |  Post Message  |  Messages List  |  Start a Board

I agree with you on the design -- it should be a clipon that people could use with their own glasses to make it more versatile (and appealing).
Reply  |  Post Message  |  Messages List  |  Start a Board

It's not dead though: The privileged and powerful have privacy, at least more of it than the average person.
Reply  |  Post Message  |  Messages List  |  Start a Board

As someone who's terrible with names, I'd love a little screen to show someone's name and where I know them from when I run into an acquaintance at the supermarket. (Nobody ever bought into my scheme of wearing trade show badges in their personal lives...) Seriously, though, I am leery of how this capability will be used -- advertising and marketing, law enforcement and stalkers, and who knows what else. I realize it's coming (here already?) but Google Glass made facial recognition seem more real and more glaring. Unlike a cell phone screen, data is right in front of the wearer, who doesn't need to make any extra effort to pull up data.
Reply  |  Post Message  |  Messages List  |  Start a Board

The facial recognition potential does pose a creepy factor. What gives you the most pause, readers?
Reply  |  Post Message  |  Messages List  |  Start a Board
InformationWeek Is Getting an Upgrade!