The Brave browser, designed to replace bad ads with better ones, has the newspaper industry threatening legal action.

The Newspaper Association of America (NAA) earlier this month threatened Brave Software with copyright infringement litigation if the company continues with its plan to allow users of its Web browser, rather than publishers, to make choices that affect the presentation of online ads.

A letter sent to Brave CEO Brendan Eich, cosigned by the legal counsels of 17 major newspaper companies, stated, "You are hereby notified that Brave's plan to replace our clients' paid advertising content with its own advertising violates the law, and the undersigned publishers intend to fully enforce their rights."

In January, Brave launched a developer preview of its browser for Android, Linux, iOS, OS X, and Windows that offers protection from invasive and malicious ads to users and revenue to publishers struggling with ad blocking.

Eich says his company wants to eliminate the ads that drive users to ad blocking by replacing them with better ads -- ads served anonymously through Brave's network. Brave users also have the option to block ads and will eventually be able to pay directly for content through Bitcoin. But this alternative revenue model doesn't appeal to the NAA.

Ad blocking has become a major issue for online publishers. In a report released last August, PageFair, a marketing consultancy, and Adobe, a provider of marketing and analytics software, estimated that ad blocking cost publishers $22 billion in 2015. The report found that ad blocking grew globally by 41% between Q2 2014 and Q2 2015. In the US, there were 45 million monthly active users of ad blocking software during Q2 2015, a 48% increase from a year earlier.

It's not that technology companies wish to see publishers fail. Rather, they see demand for ad blocking among Internet users who believe that the ad industry's will to self-regulate has failed. The PageFair/Adobe survey asked 400 US-based respondents who were not using ad blocking software what might make them start. Half of the respondents cited misuse of personal information. 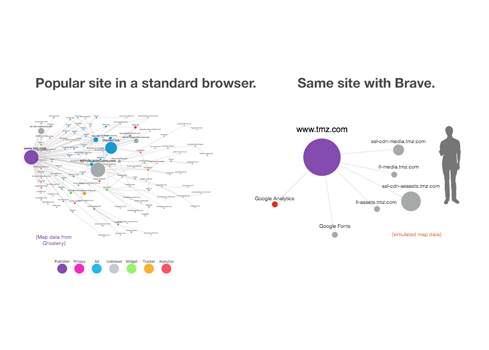 Brave aims to block the tracking that accompanies online ads by not disclosing information to advertisers or their service providers. In a rebuttal of the NAA's claims, Eich points to the problems with current ad ecosystem.

"Abusive, excessive, and even dangerous online advertising is driving users to adopt ad blockers en masse, and this is a trend that will not be reversed by legal threats, server-side anti-blocker countermeasures, or harsh language," Eich wrote in a blog post. "We note that malware has been distributed on the websites of the New York Times and the BBC recently through the ill-designed, unregulated, and poorly-delegated third-party advertising technology ecosystem."

As if to underscore Eich's point, Forbes, which has been intermittently experimenting with a way to prevent people with ad blocking software from accessing its site, was found to be serving malicious ads in January. The scope of the problem is enormous. In January, Google said it disabled 780 million ads that violated its policies last year.

Eich contends that copyright claims of the NAA are overreaching because browsers do not present content in a fixed form. "Web content is published as HTML markup documents with the express intent of not specifying how that content is actually presented to the browser user," he argues. "Browsers are free to ignore, rearrange, mash-up and otherwise make use of any content from any source."

Eich claims that if Brave's presentation of HTML represents "republication" in the sense of copyright law, then so do other browsers that customize presentation, such as Apple's Safari (which offers Reader mode), any browser using an ad blocking extension, the Links text-only browser, and screen readers for the visually impaired.

Asked to comment on Eich's response, NAA CEO David Chavern said in an emailed statement, "We continue to support our members' interest in their cease-and-desist letter notifying Brave of its planned unlawful activities. While we appreciate Brave's interest in defending its business model, and would not have expected otherwise, we continue to view their proposition as crossing legal boundaries."

It may be the NAA's intention to litigate away ad blockers, but that strategy has proven to be a resounding failure outside the US. In Germany last month, Eyeo, the maker of Adblock Plus, won a fifth legal challenge to its software.

In a phone interview, Mitch Stoltz, senior staff attorney at the Electronic Frontier Foundation, said the NAA's claim falls into a bit of a gray area. "Cases have gone both ways on this point," he said, noting that in some instances where websites have presented content in a frame, that's been considered infringement.

"If the claim that the publishers are making is everyone must view their pages exactly as intended, that's dangerous," said Stoltz, because an adverse ruling could affect screen readers and other tools for customizing Web content.

Facebook actually conducted a study that demonstrates that people hate unexpected/unsolicited sound from autoplay videos.  This is why the videos in your Facebook News Feed default as silent; Facebook found that users prefer to opt in to sound.

And, of course, if anyone had bothered to ask an actual user eight years ago, they could have found that out for themselves.
Reply  |  Post Message  |  Messages List  |  Start a Board

@SaneIT: Hey, at one point, about 17 years ago, people thought it was a good idea to design your website to autoplay a MIDI file.  Marketers sort of went from there, I guess.
Reply  |  Post Message  |  Messages List  |  Start a Board

@SaneIT: Your comment got me thinking about the irony now that we've reached a point where online "journalism site" ads are now more obscene, in a way, than the lingerie ads in newspapers.
Reply  |  Post Message  |  Messages List  |  Start a Board

@SaneIT: But people fall for clickbait!  Most people, anyway.  You wouldn't believe the traction I get on clickbaity-headlined articles on my social feeds compared to the more reasonably titled ones.

More important, in any case, is the issue of security.  Opening a newspaper bears no risk of the underwear ads rising up, forcing you out of your house, changing the locks, and demanding ransom to be let back in lest they burn the house and all your possessions to the ground.
Reply  |  Post Message  |  Messages List  |  Start a Board

@Whoopty: The whole Internet is a race-to-the-bottom, monetization-wise.  What I have to see potentially security-compromising ads at one place or pay a subscription for at another I can get somewhere else for free and safely.
Reply  |  Post Message  |  Messages List  |  Start a Board

It'll be an interesting case, probably.  Generally, copyright requires human originality -- and computer algorithms and what not sorting and arranging data and materials do not generally count.
Reply  |  Post Message  |  Messages List  |  Start a Board
InformationWeek Is Getting an Upgrade!