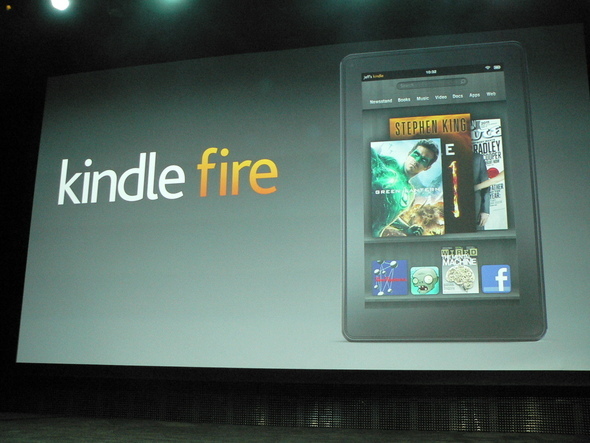 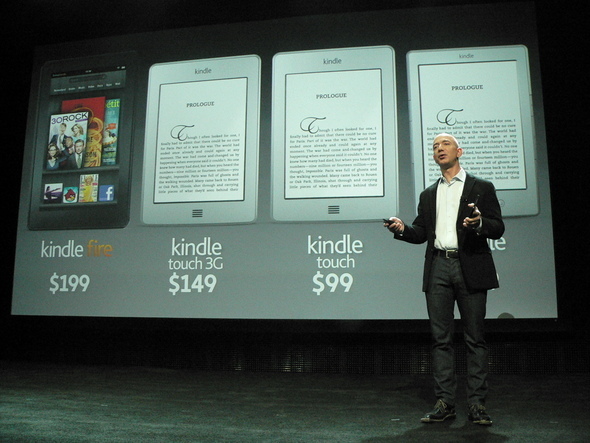 Amazon.com founder and CEO Jeff Bezos debuted the new Kindle family, starting with the $199 Kindle Fire, an Android-based tablet that puts video, audio, Internet access (via Wi-Fi only), and more than 16,000 Android Apps at the consumer's fingertips. The three new Kindle e-readers are based on black-and-white electronic-ink technology. The $149 Kindle Touch 3G is Amazon's first touch-screen model. Touch navigation aims to make it easier than Amazon's older Kindle models to turn pages, search, and shop for content. No-cost 3G access to the Kindle store is built in. The $99 Kindle Touch is much the same device, but limited to Wi-Fi. At $79, the new standard Kindle is said to be 18% smaller and 30% lighter than the old model, yet it features the same 6-inch screen. 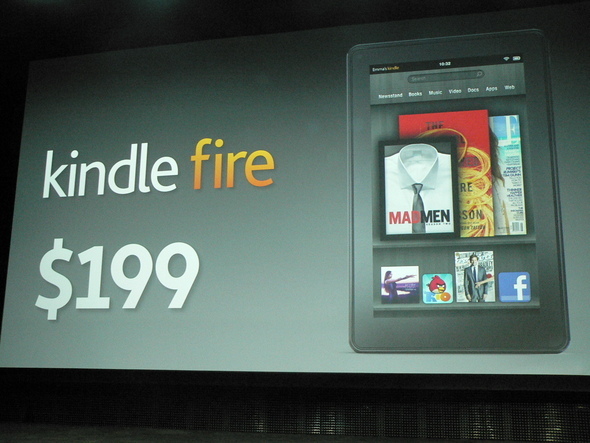 There's no doubt that a device that costs $300 less than the lowest-priced iPad2 will have dramatically broader sales potential. "We're going to sell millions of these," said Bezos in an intended understatement, "so pre-order right away to make sure you can get your hands on one." The device is scheduled to ship starting November 15. We can't break the hardware costs down yet, but at $199, the odds-on bet is that Amazon is selling the hardware at a loss and counting on profits from sales of video, audio, books and apps. 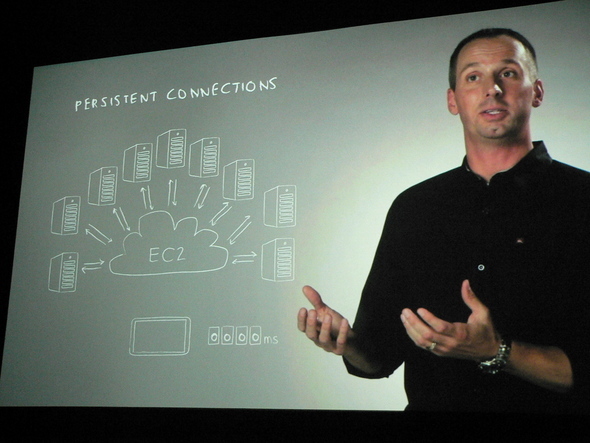 At the launch event, an Amazon engineer explains Amazon Silk, the company's new "split browser" that can handle processing demands both locally on the device and on the Amazon Elastic Compute Cloud (EC2). With each page request, Silk is said to automatically determine the most efficient split of processing, based on factors including network capacity, page complexity, and cached content. But Silk doesn't rely on back-and-forth hops between the device and the Internet for a page request that may draw on dozens of files served up from multiple domains. Instead, Silk can rely on EC2, its persistent connections to the Internet, and its massive processing power to collect all the required components, then quickly stream them directly to the device. As a result, Amazon says movies, music, books, magazines, apps, games and the Web (including Flash content) can be consumed quickly without overwhelming the processing capacity of the Kindle Fire. 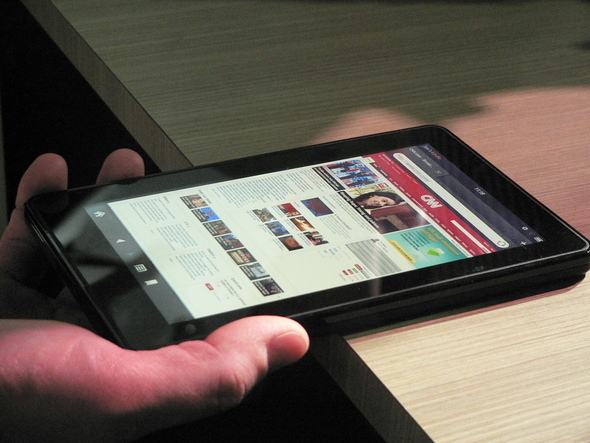 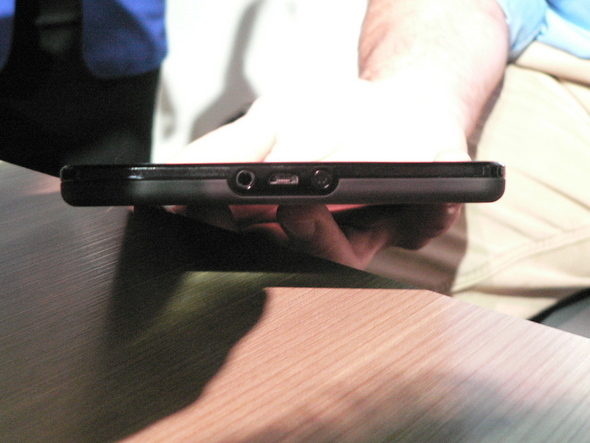 At 0.45 inches thick, the Kindle Fire is fatter than the old 0.3-inch Kindle e-reader and the 0.34-inch iPad2, but it's thinner than the 0.5-inch-thick Blackberry PlayBook. All four sides are spare, with a small round power button, an HDMI micro USB plug (for charging by USB or AC adaptor,) and a mini audio plug on the bottom. The top has two speaker slots. Sorry, no memory expansion slot or external connectivity of any kind (other than audio). 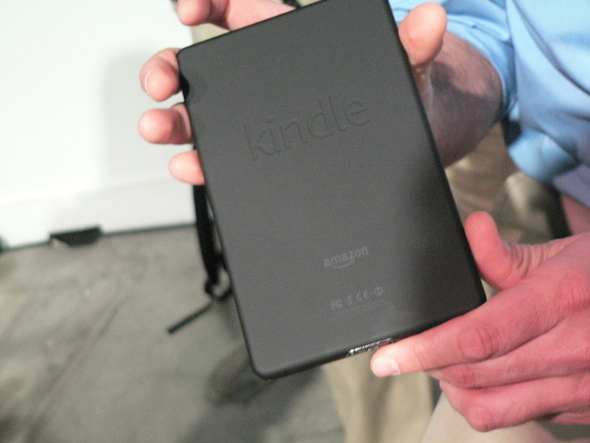 You won't find a camera on either side of the Kindle Fire. But the rubberized back feels good, and resists fingerprints. 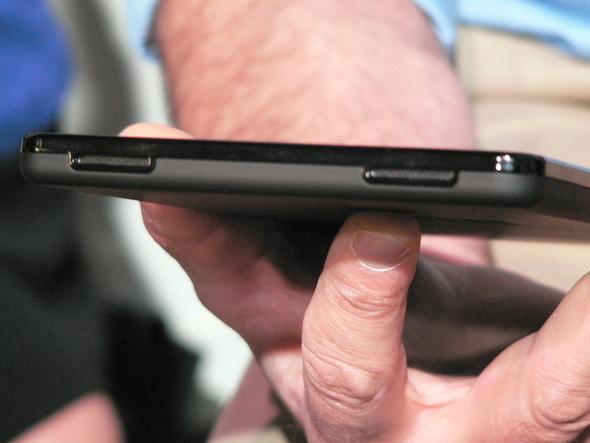 Stereo speakers are positioned at the top of the device--so they're not muffled when you place the device on a table top, pillow or other surface. Music will play while you read. 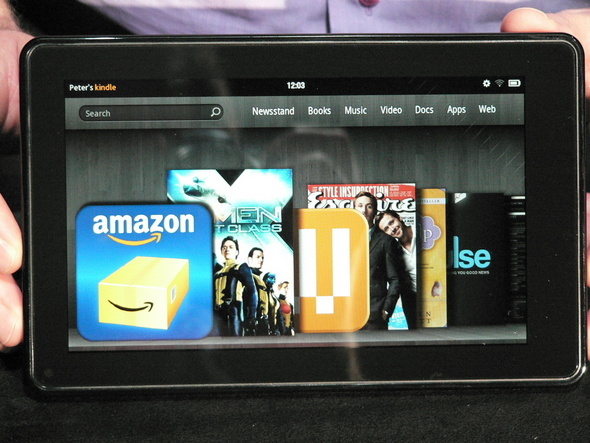 Based on what we saw at the launch event, the unit feels solid. The Gorilla Glass screen promises scratch and breakage resistance. Amazon says the display is "chemically strengthened to be 20 times stiffer and 30 times harder than plastic...which means it will stand up to accidental bumps and scrapes." 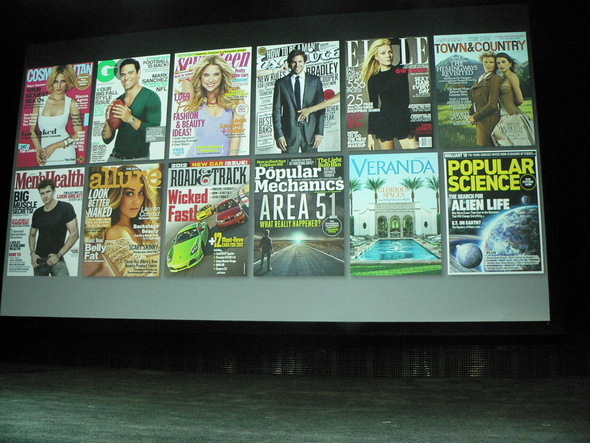 Kindle Fire doesn't match iPad2 head-on: Performance, storage, screen size and resolution, the availability of 3G connectivity, and price put that device in a different league. But how many people who might have saved and eventually splurged on an iPad will now opt for Kindle's $199 tablet experience? The killer ingredient here is Amazon's content. There may well be Android apps that don't work on Amazon's heavily customized version of the operating system. But as for video, audio, book, and periodical content, Amazon has a bigger and broader collection available than Barnes & Noble does with its Android-based Nook Color.