Amazon announced some excellent new Kindle Fire tablets and phenomenal pricing on Thursday. But make no mistake: Its battle with Apple centers on content services.

Los Angeles was practically built on alternate reality, so in the unfolding moments before Amazon's press conference at the Barker Hangar, one of those faux-retrograde event facilities on the south side of the Santa Monica Airport, it seemed conceivable to some people that the company would finally offer a tablet completely subsidized by content services. 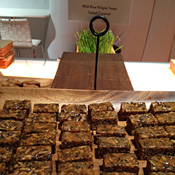 No. Not even if the press conference were held in Hollywood. (The Wild Rice Krispie Treats with Salted Caramel were a nice consolation prize, though.)

Amazon introduced the Kindle Paperwhite, an incredibly juiced up Kindle e-Reader with a front-lit display, enhanced resolution, and unfathomably-good battery life (8 weeks!) for $119, plus an upgraded 7-inch Kindle Fire for $159. Those moves put much pressure on Apple, Samsung, and other tablet rivals, including Microsoft, which has yet to bestow a price on its eagerly-awaited Surface tablet.

Amazon, which claims to have captured 22% of U.S. tablet sales within nine short months of Kindle Fire's existence, also announced the 7-inch Kindle Fire HD, a thin (8.8 mm), light, HD (1280x800) upgrade to the original Kindle Fire, for the equally nice price of $199. An 8.9-inch version of roughly the same tablet with enhanced resolution (1920x1200, 254 pixel per inch screen with a polarizing filter) sells for $299. And since most high end tablets generally run about $499 (according to Bezos, but the prices have started to fall), Amazon stuffed 32 GB of storage and 4G LTE (at $50 per year) into its $499 version. 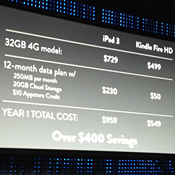 The unspoken question: Would you pay $400 more for the latest iPad?

PC Magazine's iPad vs Kindle Fire HD side-by-side comparison is pretty instructive on the features battle. In the sparse time we had to use the Paperwhite and 7-inch Kindle Fire HD, it was awfully hard to make any conclusive performance comparisons, even to the Galaxy Nexus 7.

There wasn't much here for the corporate IT crowd, although Microsoft has created a custom version of Skype, and there is deeper Exchange e-mail integration, Bezos said. There was no talk of Silk Browser--the much-hyped browser Amazon announced with the original Kindle Fire, where much of the processing happened in Amazon's cloud--which met with negative reviews. But buried at the bottom of the press release, Amazon quietly announced a new version of Silk, with an updated core rendering engine and a re-engineered transport layer. 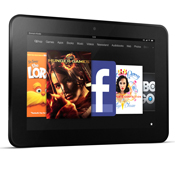 Despite its consumer-oriented appeal, if the Kindle Fire (in all of its forms) continues to give the iPad a run for its money, IT will have to consider how to accommodate the device on its networks, and in the hands of its users.

Perhaps it's a bit of a stretch right now, but IT will also have to consider the plausibility of context-aware services like Amazon's X-Ray (which brings up content related to a character in a book, or a movie actress, for example) and how it might be applied to corporate content and services.

So, Apple, how long before you sue Amazon? After beating Samsung, is there anyone out there left that can stop you?

Looks like this is going to turn into a three-way fight at the top - Apple, Google, Amazon...