Amazon is hardware happy. The company refreshed its entire lineup of tablets and e-readers on Thursday, which includes five new devices that range in price from $79 to $379. In addition to the new hardware, Amazon updated its core FireOS with some oft-requested features, such as improved sharing among family members. The tablets and e-readers will go on sale just ahead of Apple's refreshed iPad lineup.

First up is the revised Kindle Fire HDX 8.9. Amazon's top-of-the-line tablet gets a modest spec bump and some other improvements to the hardware. The tablet is now powered by a 2.5 GHz quad-core processor that Amazon claims has 70% faster graphics performance. It is probably the first device to use Qualcomm's Snapdragon 805 chip, which is the chipmaker's best. The HDX is also among the first to use Dolby's Atmos technology, which boosts the speaker volume and provides multidimensional sound when used with headphones. The tablet uses 802.11ac MIMO WiFi, and it offers the option to add LTE (for $100 more). Amazon points out that the Fire HDX has 30% more pixels than the iPad Air, and is 20% lighter than the iPad Air. Amazon pegs battery life at about 12 hours. The Kindle Fire HDX 8.9 is available for preorder beginning today, though it won't ship until October. 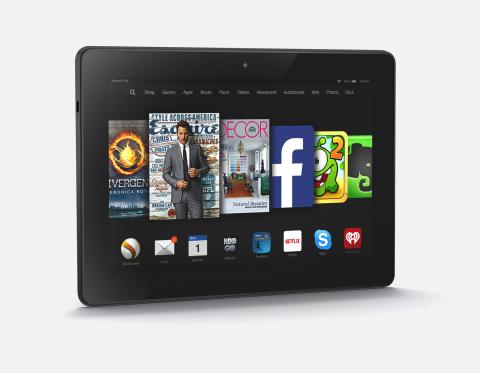 Next, Amazon debuted two new Fire HD models: a $99 tablet for adults and a ruggedized $149 tablet for kids. The Fire HD is available in two different screen sizes (6 or 7 inches) that have the same 1280 x 800 resolution. They include a 1.5 GHz quad-core processor, single-band WiFi, VGA user-facing camera, 2-megapixel rear camera, and Dolby Digital sound. The 6-inch device costs $99 and the 7-inch device costs $139. They ship October 2.

[Can Amazon compete with Apple? Read Have Apple's iPads Peaked?]

The Fire HD for Kids also comes in 6- and 7-inch models, but is protected by a hardened case and backed by a guarantee from Amazon. The Kids device has built-in parental controls. Amazon will replace it -- free of charge -- if kids manage to break it. The tablet comes in several colors. The 6-inch model costs $149 and the 7-inch model costs $189. They ship October 21.

Amazon also kicked out two new e-readers, the Kindle and Kindle Voyage. The Kindle has a 6-inch screen that now responds to touch. It runs Amazon's proprietary operating system, offers incredible battery life, and of course an e-ink screen for superior viewability. It costs just $79 and ships October 2. The Kindle Voyage has a higher-resolution screen in a more compact body and comes with the option to add 3G. It starts at $199 and ships October 21.

The Fire-branded Kindles all run the newest version of FireOS, which Amazon calls "Sangria." FireOS 4 adds a solid number of new features, such as family sharing so apps, games, and movies can be shared across user profiles. Speaking of which, the user profiles are now easier to manage, and allow individuals to have their own settings, apps, and content locked away for their personal use. A new battery-saving technology will put the device to sleep during periods of inactivity. Last, FireOS 4 adds support for Firefly, Amazon's product search tool that first debuted on the Fire Phone. Amazon said existing tablets can upgrade to the new operating system in the near future, but the Fire Phone won't get a taste of Sangria until next year.

Amazon's refreshed lineup is its most competitive yet.

Eric is a freelance writer for InformationWeek specializing in mobile technologies. View Full Bio
We welcome your comments on this topic on our social media channels, or [contact us directly] with questions about the site.
Comment  |
Email This  |
Print  |
RSS
More Insights
Webcasts
Fintech at SaaS speed: Navigating the scale & security challenge
4 Practical Tips for Building a Data Lake
More Webcasts
White Papers
The State of Zero Trust Security Strategies
How DevOps Delivers on User Experience with Observability
More White Papers
Reports
Cortex XDR Rides the Forrester Wave as a Leader
A Decade of Passive DNS
More Reports

Amazon wants in on the consumer tablet and phone markets, but how do you compete on design and features with the companies specializing in nothing but tablets and phones, such as Samsung, Apple and HDC? Amazon has considerable resources, but even it is not in a position to compete on all fronts.
Reply  |  Post Message  |  Messages List  |  Start a Board
InformationWeek Is Getting an Upgrade!