Amazon will knock $50 off the price of select phones in exchange for viewing ads on the lock screen. Don't do it. You'll be better off paying the extra cash.

Amazon Wednesday excitedly announced "exclusive pricing" on certain smartphones for Amazon Prime members. The company will sell a pair of phones for $50 off the list price, but there's a huge and ridiculous catch: You'll have to let Amazon turn your phone's lock screen into a billboard for various ads and offers.

The offer applies to two phones to start, the fourth-generation Motorola Moto G and the Blu R1 HD. The Moto G normally costs $199, but Amazon will sell it to Prime members for $149. The Blu R1 HD costs $99, but Prime members can snag it for $49. The phones are available for preorder beginning today, but won't ship until July 12. They are sold unlocked, without carrier contracts.

The market for unlocked handsets is on the way up and Amazon is apparently looking to cash in.

"Customers love the freedom of unlocked phones -- it's the fastest growing category within cell phones on Amazon.com -- so we set out to find a way to make them even more affordable for our Prime members," Laura Orvidas, VP for consumer electronics at Amazon.com said in a statement announcing the offer. Unlocked phones let people switch between wireless carriers and service plans with more flexibility. 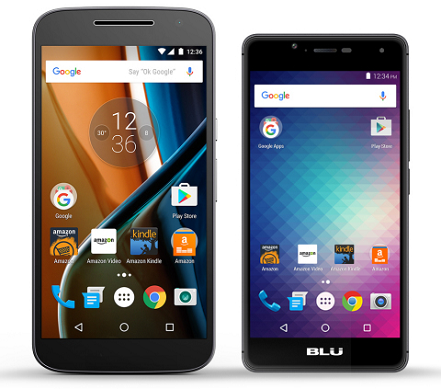 Amazon says the "breakthrough pricing" is supported by personalized offers and ads, such as deals and product recommendations. The ads will show up on the lock screen, where owners can tap to learn more or unlock their phone to dismiss the ad.

This type of offer is already in place for Amazon's Kindle e-readers and Fire tablets. The company claims the "vast majority of customers choose the lower-priced [ad-supported] option." That may be true, but smartphones are not tablets or e-readers, and Amazon is ignoring one of the primary benefits of purchasing unlocked handsets.

Apart from the freedom granted by unlocked phones, many consumers choose them over carrier-branded phones in order to avoid bloatware and other garbage apps. The landing page for both the Moto G and Blu R1 HD both clearly show an abundance of Amazon-branded apps preinstalled on the phones.

The likelihood that Amazon will allow people to delete the Amazon-branded apps is small. Moreover, the ads can't be skipped and will appear every single time you unlock the phone. That doesn't sound like freedom to me.

Moreover, Amazon hasn't explained if or how the ads will impact battery life. Will the ads only appear when the screen is turned on, or will they light up at random? Either way, the time it takes people to dismiss the ads will use battery power (even if only a little bit). Battery life is far more critical on smartphones than it is on tablets and e-readers.

(Editor's Note: After this story was posted, an Amazon spokesperson later explained to us in more detail how the lock screen ads work. "The ads only appear when you hit the side button to wake up the phone," the spokesperson said. In other words, the ads will not wake the screen all by themselves. According to the spokesperson, "If you have personal notifications, it’ll be the same size as those and [appear] at the bottom of the list. If you don’t [have notifications], then it’ll be the screen size. When you swipe to unlock, the ad goes away.")

Last, the economics just don't add up. A Prime membership costs $99 per year. This is mandatory in order to receive the $50 discount on the phones. Prime subscribers are probably not destitute people who need to save every dollar they can.

Unlocked smartphones are often inexpensive. Don't let the allure of saving $50 trick you into viewing Amazon ads each and every time you pick up your phone -- something researchers say we do 150 times per day.

Eric is a freelance writer for InformationWeek specializing in mobile technologies. View Full Bio
We welcome your comments on this topic on our social media channels, or [contact us directly] with questions about the site.
Comment  |
Email This  |
Print  |
RSS
More Insights
Webcasts
The Failures of Static DLP and How to Protect Against Tomorrow's Email Breaches
How Elite Analyst Teams are Transforming Security with Cyber Reconnaissance
More Webcasts
White Papers
How to Prioritize Risk Across the Cyberattack Surface
From MFA to Zero Trust
More White Papers
Reports
The ROI Of SD-WAN: Not Just A Numbers Game
Special Report: The Changing Face of Threat Intelligence
More Reports

I think the point was if the ads run all the time, and are multitouch/color, then they are different from apps which run or don't run in the backgrouns. But, time will tell. People may find it worthwhile overall, or not at all
Reply  |  Post Message  |  Messages List  |  Start a Board

I think the concerns are a little overblown. Honestly, I have an unlocked Moto X Pure, and guess how many of those Amazon apps I have on my phone? Hint: All of them. I actually use them often (shopping, underground, music, kindle). I know not everyone is like me, but most Prime members probably use those apps regularly. If it helps put more affordable phones in someone's pocket, I don't see why there is anything to complain about with the offer. Those apps wouldn't use any more battery power than any other app that sends notifications, so that argument is a non-starter for me.
Reply  |  Post Message  |  Messages List  |  Start a Board

Excellent point on battery life -- if you are a consumer trying  to save money, or an SMB, it may not pay off in the end

>> Moreover, Amazon hasn't explained if or how the ads will impact battery life. Will the ads only appear when the screen is turned on, or will they light up at random?
Reply  |  Post Message  |  Messages List  |  Start a Board
Editors' Choice
Hot Topics