News Corp.'s Amplify subsidiary will sell an Android tablet customized for use by K-12 teachers and students.

Educational 'Technology' Across the Ages
(click image for larger view and for slideshow)
School systems looking to incorporate tablets in the classroom don't need a standard consumer device -- they need "a tablet designed specifically for the education space," Amplify CEO Joel Klein proclaimed at SXSWEdu Wednesday.

Better known as the former chancellor of New York city schools under Mayor Michael Bloomberg, Klein was there to herald the introduction of the Amplify Tablet, an Android device manufactured by Asus that comes preloaded with an assortment of educational content and software, as well as a user interface customized for the needs of teachers and students.

The tablet's home screen includes a sidebar of "notebooks" in which students can track their work, assignments and deadlines for their courses. The teacher version has controls for pushing content to the students, directing them to a specific page of an electronic textbook, and selectively locking down student tablets so they can access only certain apps or reference materials while taking a quiz, for example.

The Wi-Fi version of the tablet starts at $299, plus $99 per year for a content and services subscription. A version bundled with access to AT&T's 4G LTE data service is $349, plus a $179 annual subscription fee. In both cases, Amplify is looking for a two-year contract. Amplify Access president Stephen Smyth said the LTE model could be justified as a choice for schools wanting to address "digital divide" issues of students who don't have broadband and Wi-Fi available at home.

Amplify says the devices are for sale now and targeted for classroom use in the fall. A video featuring happy students, teachers and a principal from a school pilot testing the devices was shown as part of the SXSWEdu launch event, but they were identified only by first name. None of those pilot project users were on hand to vouch for the device, and a spokesman declined to name the pilot schools. He said that in this pilot phase, Amplify wanted to let those educators focus on education, rather than press relations.

Some of the early reviews questioned whether the device would be affordable for purchase by many school districts. Other news reports emphasized the political drama surrounding News Corp. and Klein, with his history of setting an aggressive educational reform agenda with an emphasis on the use of technology.

Still, the tablet launch got people talking. Jeff Livingston, a senior VP of McGraw-Hill Education was participating in a panel discussion on the future of textbook publishers when he was asked which educational technology startups he was impressed by. "I wouldn't necessarily have said so before today, but … Amplify. They changed the game this morning, and I'm glad they have," he said. "Tablet, content management and software all for one price -- that's new."

Mary Cullinane, a Houghton Mifflin Harcourt executive participating on the same panel, was more skeptical, saying she was wary of putting "too much focus on the device … I don't think our instructional problems are going to be solved by a device."

"Because all content is preloaded at the factory, you don't have to download gigabytes of material," said Laurence Holt, Amplify's chief product officer. Amplify also will install dedicated servers at the school level so that content updates can be cached, rather than downloaded from the Internet to each device. If a school uses Google Apps for Education, authentication is synchronized so users need only remember one password for both the device and that service, he said.

Klein called the failure of schools to keep pace with the technologies used by consumers and businesses "inexplicable, inexcusable and unacceptable" and portrayed the new tablet as a way of getting education in gear. "We have a unique opportunity," he said. "The question is, will we seize it?" 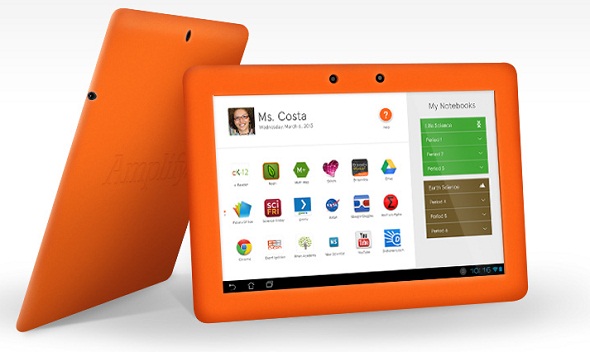 Amplify Tablet software is customized for teacher and student use.