Android 5.0 Lollipop: Where Are The Updates? - InformationWeek

Google and its smartphone partners have been slow to roll out Android 5.0 or Lollipop. It maybe a sign the code is still buggy.

Major releases of the Android operating system are generally slow to proliferate once Google makes them available. In the case of Android 5.0 Lollipop, things are going really slowly.

The latest report from Google indicates Android Lollipop represents just 1.6% of devices accessing the Google Play Store for apps, games, and other content. Manufacturers have had Lollipop in their hands for three full months. Here's where Android 5.0 stands.

Google provides data about Android versions every two weeks or so. The data it released on Feb. 2 is the first time Android 5.0 Lollipop registered on the scale at all. Its very, very small slice of the pie is due to its limited distribution. For starters, only the Nexus 6 smartphone and Nexus 9 tablet ship with Lollipop preinstalled. Further, only a handful of phone makers have pushed the update out their respective lineups.

For example, Motorola -- formerly owned by Google -- has updated its 2014 Moto X and Moto G smartphones to Android 5.0. Similarly, Google pushed Lollipop to the Nexus 5 and Nexus 4 handsets, as well as the Nexus 7 tablet. Samsung rolled Lollipop out to the Galaxy S5, but in a limited number of markets. Verizon Wireless is the first to push Lollipop to the GS5 in the US. LG has distributed Lollipop to its G3 flagship device, but again only in a few markets. Sony has promised that all its Xperia Z devices will see Lollipop at some point, but has yet to deliver.

HTC? Well, they're working on it.

HTC generally delivers updated operating systems within 90 days of the platform's release. Late last week, however, the company said things aren't going as smoothly as hoped. "We've been working hard in the labs with Google and our carrier partners ever since the code release and are making great progress so far, but if you've been following the progress of this rollout you will know that Google has had to address several issues with this release. We've been diligently working to fix some of them on our end and incorporating Google's fixes as quickly as possible, but despite everyone’s best efforts some carrier versions of the HTC One (M8) and HTC One (M7) will not meet our 90 day goal." 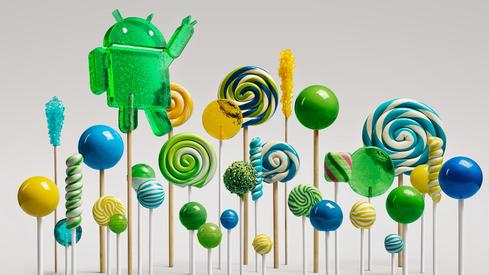 That's a polite way of saying the code is still pretty buggy -- as most anyone running Lollipop will tell you. It's clear that Android 5.0 has some time left to cook and smartphone makers are taking the time to line up all their 1s and 0s properly.

What does Lollipop have that these older versions don't? Material Design for starters, and improved security features. The code is (supposed to be) optimized to run more smoothly thanks to ART (Android Run Time) and support for 64-bit processing. Project Volta is meant to help OEMs get a handle on battery life, and newly installed apps are all scanned for malware. Last, Lollipop adds a kill switch so users can remotely disable their device.

[Office for Android, Outlook upgrade, and more in Microsoft news.]

It's clear that Android 5.0 is not in a hurry to go anywhere. Don't feel bad if your device hasn't been updated yet; chances are you still have months to wait.

Eric is a freelance writer for InformationWeek specializing in mobile technologies. View Full Bio
We welcome your comments on this topic on our social media channels, or [contact us directly] with questions about the site.
Comment  |
Email This  |
Print  |
RSS
More Insights
Webcasts
Securing and Monitoring Networks in the 'New Normal'
The Failures of Static DLP and How to Protect Against Tomorrow's Email Breaches
More Webcasts
White Papers
Five Reasons to Protect your VPN with Multi-Factor Authentication
2020 SANS Enterprise Cloud Incident Response Survey
More White Papers
Reports
The Malware Threat Landscape
How Data Breaches Affect the Enterprise (2020)
More Reports

There were a couple of occasions where I was able to point to a bug that was addressed before the final version of the software.
Reply  |  Post Message  |  Messages List  |  Start a Board

Some carriers and manufacturers do have early or even pre-release testing groups. I did this for a while with Verizon on Motorola devices.
Reply  |  Post Message  |  Messages List  |  Start a Board

I found that limiting on my previous device (Samsung Galaxy S4 on Verizon). It can be overcome with some different messaging apps. I can see the whole message and respond with as much as I want on the Verizon Messaging app on my Galaxy Note 4. Not sure how available that is across multiple devices, though.

I think the idea was only to provide a preview. If the device is locked, you don't want someone else seeing the whole message. The preview should be enough to let you know how important the text is. At least that's the thought behind it. I'm not sure it was executed very well, though.
Reply  |  Post Message  |  Messages List  |  Start a Board

I have 4.1.2 version. My LG started to malfunction about 6 months ago, so I had Verizon wipe it back to factory settings. I got an updated version, which actually has some pretty cool enhancements, but one that I find annoying: when a new text comes in, it automatically comes in through a pop-up box. Which is helpful, except that pop-up box has a max character allowance. So if the text goes longer than the allowance, then the text stops working and I have to copy and paste the message, go into my texting app and finish it off there. I find that is not an enhancement.
Reply  |  Post Message  |  Messages List  |  Start a Board

So, it's normal for a new OS to have limited distribution? Do they pick who they're delivering to and ask for feedback?
Reply  |  Post Message  |  Messages List  |  Start a Board

True. A few less bugs is worth my time to wait. At this point in my career, I don't feel like I have the time to stumble through bleeding-edge adoption. I have staff members, mostly in the Millenial generation, who love that sort of thing. Maybe I'm just getting old.
Reply  |  Post Message  |  Messages List  |  Start a Board

Every major point release I can think of is buggy. Apple's OS X Yosemite has only now started to become stable. Google is in good company.
Reply  |  Post Message  |  Messages List  |  Start a Board

As an earlier adopter of a number of previous major and minor releases of Android code, I can say from experience that the bigger changes typically come with more problems early on. These days, I'm happy to wait a bit longer to let Samsung and Verizon (for my phone at least) work out more of the issues before pushing this out. Lollipop has some nice things to offer, but I'm quite happy with KitKat 4.4.4.
Reply  |  Post Message  |  Messages List  |  Start a Board
Editors' Choice
Hot Topics