The latest update to Android for wearable devices allows connections with phones on distant networks.

Just as Apple Watch deliveries are set to begin later this week, Google has updated Android Wear in a way that highlights how its operating system gives wearable users mobility without the burden of a companion phone.

Google is drawing attention to the Apple Watch's dependence on the iPhone. The Apple Watch is designed to be an iPhone accessory, so the wearer must have an iPhone (accessible via Bluetooth or the same WiFi network) for most functions and applications. Apple's approach has some advantages in terms of battery life, simplicity, and security, but critics have characterized the Apple Watch's iPhone dependence as its Achilles' Heel.

Android Wear devices communicate with Android phones in a similar manner but can also communicate over WiFi without being on the same network. Thus, a person wearing an Android Wear smartwatch at, for example, a Starbucks with WiFi could interact with compatible apps on his or her Android phone, even if that phone happened to be at home, miles away, with only a cellular data connection.

"Your smartwatch shouldn't require you to have your phone by your side, or be within a few feet," a Google spokesperson said in an email. "It should help get you the information you need, even with your hands full on the go."

Presently, none of the makers of the seven Android Wear watches on the market have announced support for WiFi, but news to that effect is expected in the coming weeks.

The Android Wear update delivers several other useful functions. It improves access to apps by making them accessible with a tap on the watch face. Apps can now be set to stay on-screen without slipping into battery-preserving sleep. And users can now flip through notifications and cards in their stream with the flick of a wrist. 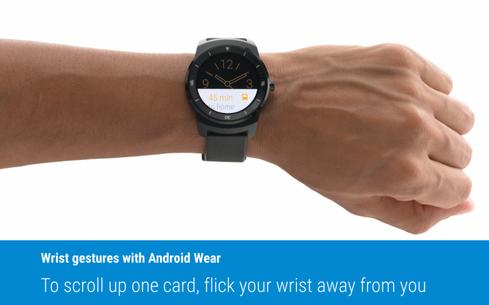 In addition, the over-the-air software update, coming first to the LG Watch Urbane, adds support for responding to messages by drawing emoji icons. Unlike the Apple Watch, which can transmit hand-drawn images, Android Wear attempts to recognize drawings so it can send the corresponding professionally-rendered emoji icon in place of the user's scrawl.

Companies selling Android Wear smartwatches such as LG, Motorola, Samsung, and Sony face a formidable foe in the Apple Watch. Last year, these hardware makers shipped more than 720,000 Android Wear devices, according to Canalys. Apple sold close to 800,000 Apple Watches in just one day, according to Slice Intelligence. And Apple's positioning of its watch as a luxury item suggests it will make far more profit from every sale, as it does in the phone market, than those offering Android Wear devices.

To some extent, the competition between Apple and Google's Android allies is limited because potential customers are likely to be tied to either Apple's or Google's ecosystem already. "I imagine that cross-shopping between Android Wear and the Apple Watch will be very minor, since the former requires an Android smartphone and the latter an iPhone," said Daniel Matte, an analyst with Canalys, in an email.

But that may not be the case for much longer. Several media outlets have reported that Google is working on an iOS app that will allow Android Wear devices to work with iPhones. A Google spokesperson said the company has nothing to announce at this time.

Thomas Claburn has been writing about business and technology since 1996, for publications such as New Architect, PC Computing, InformationWeek, Salon, Wired, and Ziff Davis Smart Business. Before that, he worked in film and television, having earned a not particularly useful ... View Full Bio
We welcome your comments on this topic on our social media channels, or [contact us directly] with questions about the site.
Comment  |
Email This  |
Print  |
RSS
More Insights
Webcasts
Building the SOC of the Future: Next-Generation Security Operations
5 Steps to Solving Modern Scalability Problems
More Webcasts
White Papers
ROI Study: Economic Validation Report of the Anomali Threat Intelligence Platform
Threat Intelligence Solutions: A SANS Review of Anomali ThreatStream
More White Papers
Reports
2021 Top Enterprise IT Trends
The Future of Multi-Cloud Networking 2020
More Reports

@daniel. Since you mentioned durability, I hope they are sturdier than an iphone. My cousin cracked her iphone 6 screen in 2 weeks after she got. If I'm buying an iwatch,  I will sure insurance it because I will really go nuts for cracking its little screen or if its handle breaks.
Reply  |  Post Message  |  Messages List  |  Start a Board

I can only imagine that using wifi on these tiny devices would kill battery life.

And that brings up something interesting I'd like to know: How long are these devices expected to last over the course of a day? Over a few months? Over a few years? Probably not very loing. I think I'll hold off buying one of these for now.
Reply  |  Post Message  |  Messages List  |  Start a Board

that's why this is the new pyramic for needs:

I agree. The battery life will be a hassle, I can imagine on main metro cities like NYC people trying to charge their smartphone and their smart watches at the same time.  I rather stick with a dumb watch for now.  I'm surprise that Google and Apple don't use battery life as a way to get new consumers to their watches?
Reply  |  Post Message  |  Messages List  |  Start a Board

That is my concern about a watch. It is a pain when I have to plug in my phone during the day because of extra heavy usage. But, I expect that after 10+ years of using similar devices. It would be positively frustrating to have to take off my watch to charge it up midway through the afternoon. Battery life could be the Achilles heel of smart watch adoption.
Reply  |  Post Message  |  Messages List  |  Start a Board

@Whoopty: Apple has always been keen on delivering to the A-rated masses. So it doesn't come as a shock that they introduced a luxury option for an electronic gadget as well. The question is, would the hardware/software be more powerful and/or beefier in the luxury edition of the iWatch?
Reply  |  Post Message  |  Messages List  |  Start a Board

I don't see why anybody would be interested in investing in a watch that doesn't even give a full day battery backup? Moreover having gadgets at every end of you would make world a havoc because with so many notifications around, you cannot live peacefully.
Reply  |  Post Message  |  Messages List  |  Start a Board

I've always been impresed (and somewhat surprised) with the success of Apple's smartphones, as being limited to just one brand of handset doesn't seem to have had much of an effect on it. You would think, with all of the wealth of options available and the open nature of its platform, Android would always be preferable, but somehow Apple has always retained a large market share.

Boggles the mind when you throw in smart watch purchases. All of them will be worth 20 per cent of their value in a year's time.
Reply  |  Post Message  |  Messages List  |  Start a Board
Editors' Choice
Hot Topics