Apple has banned the use of two toxic chemicals in the final assembly of its iPhones and iPads in an effort to promote healthier working conditions at factories making its devices.

In a statement posted on the company's website, Lisa Jackson, Apple's VP of environmental initiatives, announced the first public release of Apple's Regulated Substances Specification, a document that describes restrictions on the use of specific chemicals at the company's manufacturing facilities and those of its supply chain partners.

Apple's rules now forbid its suppliers from using benzene and n-hexane, employed as cleaning agents, in the final stage of device assembly. The US Centers for Disease Control & Prevention notes that exposure to benzene can harm bone marrow and cause leukemia, while n-hexane can cause neurological damage and motor function problems.

[iOS is still in good graces, but maybe not for long. See Apple's Dominance Of Enterprise Mobility Slips.]

Apple first acknowledged reports about the use of these chemicals in its 2011 Supplier Responsibility Progress Report, a document the company began releasing in 2007. The company's 2011 report said it learned in 2010 that 137 workers at the Suzhou, China, facility of contract manufacturer Wintek had suffered adverse health effects following exposure to n-hexane. In response, Apple directed Wintek to stop using the chemical. But concerns about chemical exposure at other manufacturing facilities have remained an issue among environmental and labor groups.

"Recently, we received some questions about whether the chemicals benzene and n-hexane are used in the manufacturing of our products," said Jackson in a statement. "Apple treats any allegations of unsafe working conditions extremely seriously. We took immediate investigative action, sending specialized teams into each of our 22 final assembly facilities, and found no evidence of workers' health being put at risk." 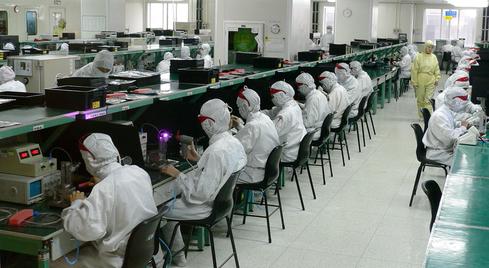 Apple's four-month investigation followed a campaign launched in March, and protests at the flagship Apple Store in New York the following month, by China Labor Watch and Green America. The two labor advocacy groups gathered signatures to encourage Apple to "stop poisoning Chinese workers." The groups state that other companies, including BlackBerry, Nokia, Samsung, and Sony, make smartphones using the same contract manufacturing companies (such as Foxconn, Pegatron, Quanta, and Primax), but Apple has been targeted because of its position as an industry leader.

The campaign, online at www.bad-apple.org, acknowledges that it's difficult to know how many workers have been affected by occupational poisoning in China. But the groups cite a 2010 report that identified 42,890 workplace poisonings in China, with a 16.5% mortality rate, from 1991 through 2008.

Averaged out over 18 years, that's about 2,383 occupational poisonings annually in China with about 393 workplace poisoning deaths each year. In the US, which has more than four times fewer people than China, there were 130 work-related deaths in 2008 due to contact with caustic or noxious substances, according to the National Safety Council.

Though not directly comparable, the US Environmental Protection Agency estimates that there are somewhere between 10,000 and 20,000 physician-diagnosed pesticide poisonings among the roughly 2 million US agricultural workers every year.

In a phone interview, Gary Cook, senior IT analyst with Greenpeace, a group that has challenged Apple to be more responsive to environmental and energy concerns over the years, said, "Apple's announcement this week is an important step for the company, and a step that other companies in the sector should follow, in terms of being responsive to customers."

Cook singled out the release of Apple's Regulated Substances Specification as a milestone because it invites greater accountability.

Apple has made significant improvements in its environmental and energy practices in the past two years, Cook said.

"There's still a long way to go," Cook said, "and Apple is aware of that, but they've shown they're willing to change. Apple is certainly among those who are leading in terms of environmental performance, and this is an important step toward increasing their transparency."

Thomas Claburn has been writing about business and technology since 1996, for publications such as New Architect, PC Computing, InformationWeek, Salon, Wired, and Ziff Davis Smart Business. Before that, he worked in film and television, having earned a not particularly useful ... View Full Bio
We welcome your comments on this topic on our social media channels, or [contact us directly] with questions about the site.
Comment  |
Email This  |
Print  |
RSS
More Insights
Webcasts
Unlocking the Ultimate Source of Truth in Cloud Security--Network Data
Using Artificial Intelligence, Deep Learning and Machine Learning for Cyber Defense
More Webcasts
White Papers
DevOps for the Database
SANS Guide to Evaluating Attack Surface Management
More White Papers
Reports
2020 State of Cybersecurity Operations and Incident Response
Special Report: The Changing Face of Threat Intelligence
More Reports

It is great to see companies becoming more proactive in preventing toxic waste and biohazards. Even Miller Coors was mindful of its water distribution during the drought period in California. These are dangerous disaster areas and should be addressed in such ways.
Reply  |  Post Message  |  Messages List  |  Start a Board

I'm glad as well. And can I say, perhaps it's about time, too! Sure, doing so and finding alternatives might raise costs--but there's no price you can put on health, really.
Reply  |  Post Message  |  Messages List  |  Start a Board

For minimum wages (or slightly more than that), workers at manufacturing plants risk their health day in and day out to put together the gadgets we hold in our hands. This is something to think about, specially the manufacturers who can do more to create a better, safer work environment.
Reply  |  Post Message  |  Messages List  |  Start a Board

The workplace condition need to improved in manufacturing plants. It will be done in spet by step (like this one). Smililarly, we need to think abou the e-wastes. We are going to dump biliion handsets in next decade. We need a plan to deal with that, too.
Reply  |  Post Message  |  Messages List  |  Start a Board

I'm just glad that they are trying to do something about this.

Electronics manufacturing requires so many different components, and when we buy a new shiny object we are usually in awe. Thing is, we don't spend a whole of time thinking about the process that devices must go through to be built. Apple is raising awareness of that, which is the goal of these watchdog-type groups.
Reply  |  Post Message  |  Messages List  |  Start a Board

I thought I heard about a year back that Apple was closing those plants down---or was that just the child labor places?
Reply  |  Post Message  |  Messages List  |  Start a Board

Particularly when you realize these chemicals are for cleaning. Maybe a damp rag would save a few lives.
Reply  |  Post Message  |  Messages List  |  Start a Board

There's been reports of horrific deaths and injuries at Apple manufacturing facilities for years, it's amazing it's taken as long as it has. Similarly Foxconn needs to be taken to task, as its breaches of human and worker rights have been apalling.

Hopefully as China becomes more and more dependant on western goods purchases, it will implement tighter labour controls to make its working environments safer, because as things stand it's government is letting a lot of people suffer for the sake of saving money.
Reply  |  Post Message  |  Messages List  |  Start a Board

Even after the report came out, it took them four years to ban the chemicals. That seems awfully long, no?
Reply  |  Post Message  |  Messages List  |  Start a Board
Editors' Choice
Hot Topics