Apple argues in a court filing that the government is asking for "boundless" power in its bid to get the company to help the FBI unlock an iPhone used by one of the shooters in the San Bernardino terrorist attack.

Apple filed a motion in a California court on Thursday seeking to vacate a court order that requires the company to help the FBI unlock an iPhone used by one of the shooters in the December 2015 San Bernardino, Calif., terror attack.

The FBI, with the support of the Department of Justice, wants Apple to create a special version of its iOS mobile operating system that would disable security features built into the the iPhone, specifically a feature that deletes phone data after 10 failed passcode attempts and a feature that imposes a delay to limit automated passcode guessing. This will enable the FBI to break into the device through what's known as a brute force password attack.

Apple CEO Tim Cook last week published a letter to customers that characterized the government's demand as "a dangerous precedent." The company's court filing elaborates on that claim.

"This is not a case about one isolated iPhone," the filing states. "Rather, this case is about the Department of Justice and the FBI seeking through the courts a dangerous power that Congress and the American people have withheld: the ability to force companies like Apple to undermine the basic security and privacy interests of hundreds of millions of individuals around the globe." 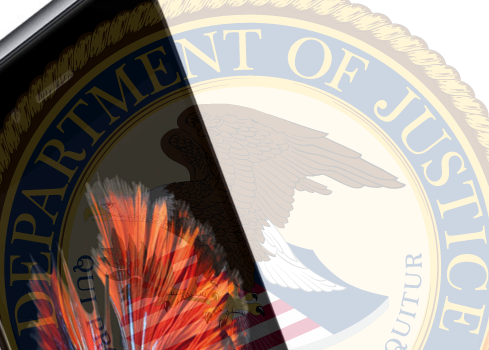 Apple's attorneys argue that the government's "boundless" interpretation of the All Writs Act -- the law invoked by the Department of Justice to compel Apple's cooperation -- would allow it to demand that Apple help spy on customers by activating iPhone microphones or cameras, to insist that a journalist file a false story to lure out a fugitive, or to force a pharmaceutical company to manufacture a lethal drug to facilitate an execution.

The filing explains that despite assertions by former national security officials that a greater public good is served by having encryption than not having it, the Department of Justice has considered proposals to expand the Communications Assistance for Law Enforcement Act (CALEA) by mandating backdoors in technology products to ensure government access.

Yet, the filing says, Congress and President Obama have not supported this expansion of CALEA, "meaning that Congress never granted the authority the government now asserts."

Apple's attorneys suggest the government has been disingenuous in its attempt to assert such authority by seeking a motion to compel Apple's assistance without allowing Apple to object in court. They note that the FBI sought to shift the blame for changing the passcode on the device (and thereby necessitating Apple's help) to the phone's owner, the San Bernardino County Health Department, before acknowledging that FBI agents had worked with the health agency to do so. They also observe that FBI Director James Comey's unprecedented blogging about pending litigation suggests that the government doesn't expect any critical evidence to be obtained from the phone.

The filing challenges the Department of Justice's assertion that the assistance required isn't an undue burden. It claims that to produce the special version of iOS sought by the FBI would require between six and ten Apple software engineers and product managers to dedicate a substantial portion of their time over a two- to four-week period.

Furthermore, the filing says that Apple's entire development process would have to be logged and recorded for future court challenges.

Apple's legal team goes on to claim that the government's attempt to use the All Writs Act in this case is unconstitutional. They argue, "federal courts themselves have never recognized an inherent authority to order non-parties to become de facto government agents in ongoing criminal investigations." Company lawyers also claim the All Writs Act does not apply because law enforcement assistance by technology providers is covered under existing laws that specifically omit companies like Apple.

"Society is still debating the important privacy and security issues posed by this case," Apple's argument concludes. "The government's desire to leave no stone unturned, however well intentioned, does not authorize it to cut off debate and impose its views on society."

Thomas Claburn has been writing about business and technology since 1996, for publications such as New Architect, PC Computing, InformationWeek, Salon, Wired, and Ziff Davis Smart Business. Before that, he worked in film and television, having earned a not particularly useful ... View Full Bio
We welcome your comments on this topic on our social media channels, or [contact us directly] with questions about the site.
Comment  |
Email This  |
Print  |
RSS
More Insights
Webcasts
Unifying Your Endpoint Security Strategy
Fact or Fiction? The Truth About Cloud Native Security
More Webcasts
White Papers
Tessian Human Layer Security for Microsoft Office 365
Why DLP Has Failed and What the Future Looks Like
More White Papers
Reports
State of the Intelligent Information Management Industry in 2021
Why You're Wrong About Operationalizing AI
More Reports
Copyright © 2021 UBM Electronics, A UBM company, All rights reserved. Privacy Policy | Terms of Service