Apple's new iPhone 5s and iPhone 5c make a lot of advances, but they also left a lot of technology out. 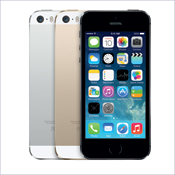 iPhone 5s
The Apple iPhone 5s and iPhone 5c are exactly what everyone expected to see from Apple at its press event Tuesday. The 5s is a significantly upgraded version of the iPhone 5, while the 5c is a lower-cost model meant to round out Apple's product range. Both include 4-inch Retina displays and improved cameras.

The 5s is the first device to ship from Apple with the company's A7 64-bit processor. It will be sold in three colors (silver, slate and gold), and includes a fingerprint scanner for security. The iPhone 5c is the first iPhone to use plastic in its design since the 3GS, and it comes in five colors (white, pink, blue, green and yellow). Storage options for both range from 16 GB to 64 GB, and pricing ranges from $99 for the cheapest iPhone 5c to $399 for the most expensive iPhone 5s (with a new, two-year contract, of course).

Despite the advancements offered by both devices, Apple continues to leave today's bleeding-edge technology out of the iPhone. Here are a few things missing that are offered by competing products.

--NFC: Near-field communications is a short-range radio technology that has a number of uses. For example, it can be used to automatically pair to Bluetooth devices, or to make mobile tap-and-go payments. Most of today's leading smartphones, such as the Samsung Galaxy Note 3, HTC One and LG G2, include NFC. Without it, Apple's iPhones will be unable to participate in mobile payment systems. Why Apple has shied away from this standardized technology is a mystery.

-- Wireless Charging: Apple continues to ignore wireless charging technology. With it, smartphone owners can place their device on a (plugged-in) charging pad. The pad then uses magnetic induction to pass a charge to the smartphone's battery. It is possible that Apple will leave this alone until it is fully standardized. Right now, three industry groups are groping for supremacy. That said, other smartphone makers, including Samsung, LG and Nokia, are including wireless charging in their devices.

-- HD Screen: Never mind how small the puny 4-inch diagonal display is on the iPhone 5s and 5c, neither screen has the ability to play full HD content. Almost all the new flagship devices announced this year, such as the One, GS4 and G2, have screens with 1920 x 1080 pixels. That makes them able to play the same high-definition content you watch on your television. Apple's iPhones stick to a non-standard 1136 x 640 pixel resolution that is incompatible with even 720p HD content, let alone 1080p.

-- Customization: As with all prior iPhones, there is no way to get inside the iPhone 5s or 5c. That means no support for additional storage in the form of microSD cards, nor a user-replaceable battery. Apple will likely never offer an iPhone with these options. If you like being able to keep a spare battery or extra memory card around, the iPhone is not for you.

The files are still 720p if you move them to, say, a PC. As one of the other posters pointed out, Apple doesn't put HD screens on its iPhones because at this screen size, the extra pixels don't add anything to the image. The 120 fps option is very cool, though. Wish Apple had gone ahead with 60 fps at 1080p too.

I agree with the people who aren't that bothered by the NFC exception; like some others, I think Apple has its own plans, and it's not really missing out in the meantime.

I'm surprised people aren't more irked by Siri. I think both of the new iPhones look pretty terrific overall, but Apple has really failed to bring Siri along. For me, that's one of the bigger bummers. Apple got the mobile interaction model right, but perceptual computing technologies are going to be a big part of future interaction models. Apple seemed to have a head start here, but no longer.
Reply  |  Post Message  |  Messages List  |  Start a Board

For those who are more interested in the Enterprise implications of Apple's announcement, you might enjoy this info-parady on "The Apple Event for the Enterprise that never happened"
http://www.slideshare.net/Moov...
Reply  |  Post Message  |  Messages List  |  Start a Board

As an iPhone and iPad mini user, I think the camera improvements are a huge pro. The appeal/utility of the 64-bit chip depends on how apps take advantage, and on that score, it's wait and see.
Reply  |  Post Message  |  Messages List  |  Start a Board

I'm an Android man, but I like how Apple isn't trying to make the iPhone anything more than a great, portable smartphone. Even though I'm a fan of the 5-inch Android phones out there, the screens are bigger than they need to be for a phone. Leave the movie watching and book reading for tablets.

The fingerprint sensor and the new processors are the standouts here. Nothing earth-shattering but enough to raise some eyebrows.
Reply  |  Post Message  |  Messages List  |  Start a Board

"Apple's Match service eliminates the need to store all your music on a device." Except that you have to pay to store songs not purchased through iTunes.
Reply  |  Post Message  |  Messages List  |  Start a Board
Editors' Choice
Hot Topics