Apple will announce the iPhone 6 on Sept. 9, according to several published reports. The timing of the announcement is not unexpected, but it does conflict with other technology events taking place around the country. Apple's announcement will likely clod upon news shared by competitors -- a tactic Apple has long favored.

Apple announced the iPhone 5s and 5c on Sept. 10, 2013, at an event in California. The device went on sale about 10 days later. The iPhone 6 will make its debut almost exactly one year later. Sept. 9 had long been the assumed launch date based on the timing of Apple's past launch events. Re/Code was first to suggest Sept. 9 as the final date, and it was quickly followed by The Wall Street Journal, Financial Times, and Fortune. All the sources cited "people familiar with Apple's plans." Apple itself has not made a formal announcement or sent invitations.

Apple is widely believed to have two new iPhones prepped for September. The devices will both stray from the small format used by Apple since the original iPhone's debut. The iPhone 6 is expected to come in two sizes -- one with a 4.7-inch screen and one with a 5.5-inch screen. These screen sizes will help Apple and the iPhone compete against the large-screened phones that consumers have come to prefer over the past two years. Until now, Apple has largely ignored the trend toward bigger screens, favoring usability.

Apple execs have voiced excitement for the company's planned fall product launches several times during the last few months. Senior vice president Eddy Cue went as far as to describe its fall lineup as the best ever during his tenure at Apple. 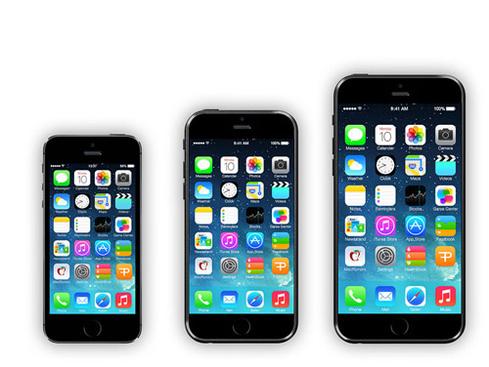 Leaked images show how the next iPhone models
are expected to grow in size.
(Source: MacRumors)

Apple won't be the only company making announcements Sept. 9, but surely it will be happy to steal the spotlight. That date also happens to be the kickoff for the CTIA Wireless Industry's annual tradeshow in Las Vegas. It is a very real possibility that announcements originally planned for the first day of that show will be altered or changed to another time or date -- though the show will certainly go on.

Sept. 9 also lands mere days after the close of the IFA tradeshow in Berlin. Apple's nemesis, Samsung, is expected to announce the Galaxy Note 4 smartphone at a Sept. 3 event. Sony, too, is preparing a new smartphone for Sept. 3, while Alcatel and Huawei have announcements prepped for Sept. 4.

Early September will be a bonanza for smartphone lovers at any rate.

I realize the popularlity of Samsung phones proves I'm in teh minority here, but I really don't want a smartphone with a bigger screen. If I want that, I'll use my tablet...

What is the appeal of smartphones with larger screens?
Reply  |  Post Message  |  Messages List  |  Start a Board

Or have new iPhone releases become hum-drum affairs?
Reply  |  Post Message  |  Messages List  |  Start a Board
InformationWeek Is Getting an Upgrade!