Apple Results: iPhone Blooms, But Whither The iPad? - InformationWeek

Apple's earnings were all about the iPhone. The company shipped 47.5 million of its smartphone, a record for its fiscal third quarter. Nearly all the questions aimed at Apple executives during its call with analysts pertained to the iPhone, with a few about the Apple Watch tossed in for good measure.

iPad sales were merely a line item in Apple's results, and didn't draw much discussion. Let's rectify that.

Apple shipped 10.9 million iPads during the quarter. That represents an 18% drop in units and a 23% drop in revenue. Apple's iPad business peaked during the first quarter of 2014 with unit shipments of 26.4 million. Since then, Apple's iPad sales have seen nothing but steady year-over-year declines each quarter.

Apple isn't alone in feeling some pain in the tablet market. The segment for tablets is expected to contract, with shipments of 207 million for the year, according to Gartner. That's down 5.9% when compared to 2014, though Gartner predicts things will pick up again in 2016.

"The tablet market is hit by fewer new buyers, extended life cycles and little innovation to encourage new purchases," Roberta Cozza, research director at Gartner, wrote in a July 6 report. "The tablet has become a 'nice to have' device, and there is no real need for an upgrade as regularly as for the phone." 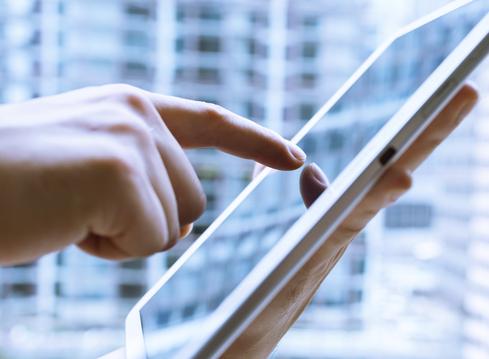 Gartner now believes the replacement cycle for tablets is about three years. "We also expect the tablet market to reach a penetration close to 50% of households in mature markets by 2016," added Cozza. In other words, the growth curve is beginning to flatten.

Gartner says sales of large-screen smartphones have helped put the screws to sales of small-screen tablets, as well. The iPhone 6 Plus, with its 5.5-inch screen, is surely eating into potential sales of the iPad Mini, for example.

Is it time for Apple (and its investors) to panic? Cook is clearly calm and collected about the matter.

Earlier this year, Cook admitted possible cannibalization and replacement-cycle woes might impact iPad sales. That is now bearing out. The company, however, has plans to revitalize its iPad business.

Apple is making significant improvements to the iPad through iOS 9.

It adds an improved keyboard and, for the first time, split-screen multitasking. Moreover, Apple is widely expected to debut a larger iPad Pro in the fall, with a screen pushing 13-inches. (Cook's reference to the future business prospects of the iPad was a small nod in this direction.)

iPads are showing up in more and more business, especially as point-of-sale devices. These changes will only make the iPad more appealing.

Apple's new iPad Pro will likely debut in October alongside refreshed versions of the iPad Air and iPad Mini. That will be too late to impact Apple's third-quarter numbers, but expect a healthy bounce during the fourth quarter.

Pedro, you hit upon a good point. I am wondering why people are quicker to replace iPhones than iPad -- is it simply because of broken parts, or because we use phones more often (and thus need them to work at a higher level)?
Reply  |  Post Message  |  Messages List  |  Start a Board

Thank you for you're comment, and a very good point.

I do think that Samsung and it's line of tablets have done a better job at showcasing multitasking and using the tablets for work purposes. People usually associate using a tablet for work as limited to emails and reviewing documents, but not actually getting something done.

The fact that you can attach any USB devices (including mouse and keyboard) to an android tablet shows a great deal of versatility, one that many folks appreciate.
Reply  |  Post Message  |  Messages List  |  Start a Board

May be Apple wants to turn their Ipads like the Microsoft Tablet.  This shouldn't be a bad idea.  I think there is more competition in the Tablet market than before.  It is difficult for Ipads to separate from other vendors.   People have more choices.  People tend to replace their phones more becuase of a crack screen, or other issues.
Reply  |  Post Message  |  Messages List  |  Start a Board

Stratus, the way iPads are evolving tells that they are getting closerv to some MacBooks. At some point, Apple might be merging the iPad and MacBook Air, or the iPad Pro might very well be an alternative to the MacBook Air, or the new MacBook. You'll see. :) -Susan
Reply  |  Post Message  |  Messages List  |  Start a Board

mejiac, well, no. It's not like companies are trying to target individuals who don't see the potential of the iPad as a working tool. It's those other people who have done a good job convincing others that iPads are not good for work. So, that's the problem I see, you see? -Susan
Reply  |  Post Message  |  Messages List  |  Start a Board

Hopefully companies are performing market research to determine what is it that consumers are asking for.

Many times (like Apple has done in the past), the companies dictates what's the next step. I know that for me, it's more integration with my existing devices and online accounts, without having to change an ecosystme (jump from Windows to Mac for example)
Reply  |  Post Message  |  Messages List  |  Start a Board

I could be wrong, but I don't see the iPad growing in popularity just because of a bigger screen. It's still a device more focused on consumption than creation for most users. I would guess many Apple diehard follower will buy one because it's out. I don't believe very many will choose to buy the bigger iPad versus other forms of full computing devices (whether than be a Surface, laptop or Macbook).
Reply  |  Post Message  |  Messages List  |  Start a Board

I would be interesting to see how the market will continue to evolve. Before tablets were the "new thing" and are now the norm. Many other industries are still making products to utilize the existing tablet base (like car manufactures that have WiFi enable cars (which in essense is just another way to use a hot spot)

Even thought the laptop market shrank, it won't go away, same goes for Tablets given the health of app ecosystems.

And because of products like Apple Air Play and Google Chrome Cast allow to extend the use of existing devices in a different way, it won't be long before TVs will have embedded protocals to utilize the casting feature.
Reply  |  Post Message  |  Messages List  |  Start a Board

Exactly!  Unlike smartphones which get more heavy day-to-day use and have higher risk of damage due to their nature of use, tablets are going to see a longer lifespan simply because many users don't see an urgent need to update or replace their tablet.  As long as the functionality is still there, it's going to be less critical for them to replace a tablet (unless it is used to replace a laptop function-wise) than it would be for other technology products.
Reply  |  Post Message  |  Messages List  |  Start a Board

And sadly is it that audience that companies are mostly trying to target there marketing, since they're the most likely to continue buying.

Those that are tech saavy do take advantage of the ipads capabilities, but we represent the minority in comparison to what really drives sales volume
Reply  |  Post Message  |  Messages List  |  Start a Board
Page 1 / 3   >   >>
Editors' Choice
Hot Topics