Apple is working to open retail stores in India, now the world's second-largest smartphone market. Although Apple has eyed the country for a while now, the company's plans point to a quick and rapid expansion to help its iPhone sales.

Apple is working to open its first retail stores in India, a country of 1.3 billion people that's grown into the world's second-largest smartphone market, behind China, and one that can help keep new customers coming to the iPhone.

To get that process started, Apple submitted an application to receive government approval to open its first stores there, though it didn't get the "format" quite right and has resubmitted the application, according to a Feb. 7 report from Bloomberg Business. An unnamed source told the publication that it's not clear how many stores Apple aims to open, or in what time frame the application may be approved.

During Apple's Jan. 26 earning call with analysts, CEO Tim Cook pointed to India as an "incredibly exciting" market for growth and an example of Apple's ability to find investment opportunities during times of economic uncertainty.

"Some of the most important breakthrough products in Apple's history were born as a result of investing through the downturn," Cook said during the call. "We've also seen these times as opportunities to invest in new markets, just as we're doing now in areas such as India." 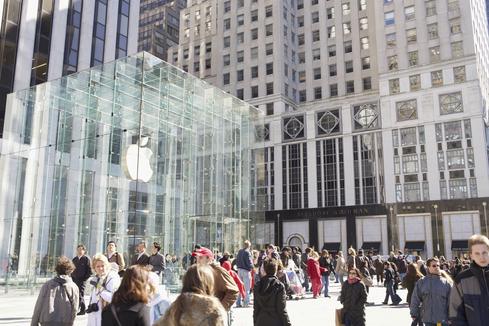 As of the close of Apple's quarter, 66% of its revenue was generated outside of the US. Despite economic softness, Cook said that Apple saw its best results ever in Greater China, with revenue growing 14% over last year and 47% sequentially.

It currently has 28 stores in China and plans to have 40 by this summer.

Highlighting the potential that India represents, Cook noted that while the median age in China is around 36 or 37, in India it's 27.

"Almost half the people in India are below 25," Cook noted. "So I see the demographics there also being incredibly great for a consumer brand and for people that really want the best products."

Sales of iPhones in India grew 76% during the quarter.

During the calendar third quarter of 2015, one in three smartphones shipped in India was 4G enabled, an almost threefold increase over the previous quarter, according to IDC.

Nearly half of the smartphones sold there during the quarter had 5-inch-plus displays and prices below $200. With sub-$150 LTE devices, Samsung currently dominates India's budding smartphone market, with a 24% share, followed by Micromax, an Indian brand, with a 16.7% share.

Apple's marketshare, by comparison, is around 2%, which analysts attribute, in part, to Indian consumers' lack of an in-store experience and the relative high prices of the iPhone.

Following Apple's last earnings call, Jackdaw Research analyst Jan Dawson explained in a blog post that while Apple continues to diversify its revenue streams, the size of its iPhone base "becomes ever more important to its revenue growth."

While Apple introduced the Apple Watch, Apple TV, Apple Music, and the iPad Pro in 2015 to spur growth and profitability, Dawson wrote, "almost all of these new products and services are tied to the iPhone in some way, and benefit greatly from the installed base of a half billion iPhone users."

While the iPhone itself will contribute less to Apple's overall performance going forward, Dawson added, "it's going to become ever more central to Apple's future growth."

IDC analyst Kiran Kumar expects smartphone marketshare in India to finally outstrip feature phones in 2016, and for the country to see a "healthy double-digit growth rate" over the next few years.

Counterpoint Research reported Feb. 2 that the "India smartphone user base grew to 220 million users by the end of 2015, surpassing [the United States] for the first time ever."

Michelle Maisto is a writer, a reader, a plotter, a cook, and a thinker whose career has revolved around food and technology. She has been, among other things, the editor-in-chief of Mobile Enterprise Magazine, a reporter on consumer mobile products and wireless networks for ... View Full Bio
We welcome your comments on this topic on our social media channels, or [contact us directly] with questions about the site.
Comment  |
Email This  |
Print  |
RSS
More Insights
Webcasts
Unifying Your Endpoint Security Strategy
Using Cyber Underground & Blockchain Intel to Stop Cyber Attacks
More Webcasts
White Papers
Forrester Total Economic Impact Study: Team Cymru Pure Signal Recon
The 2021 Security Outcomes Study
More White Papers
Reports
Increased Cooperation Between Access Brokers, Ransomware Operators Reviewed
The Infoblox Q1 2021 Cyberthreat Intelligence Report
More Reports