Apple doesn't yet compete in the wearable computing market, but it's already expected to dominate it.

Forrester Research predicts that Apple will legitimize wearable devices and then come to dominate the market for them until 2016. Forrester's argument for Apple's ascension takes past performance -- Apple's takeover of the MP3 and smartphone markets in 2001 and 2007 respectively -- as an indicator of future results.

Though this is precisely what financial firms warn investors against in their disclaimers, Forrester's coronation of Apple as wearable king sounds plausible because no other claimants for the crown are more credible.

In a brief intended for chief marketing officers, "Prepare Now For Apple’s Giant Leap Into Wearables," Forrester researchers James L. McQuivey and J. P. Gownder note that while Google, Microsoft, and Samsung (among others) have launched or are planning to launch wearable devices, "Apple is the one digital platform provider with a proven track record of having the hardware smarts and the brand power to put new gadgets on our persons and have us happily pay a premium for them." 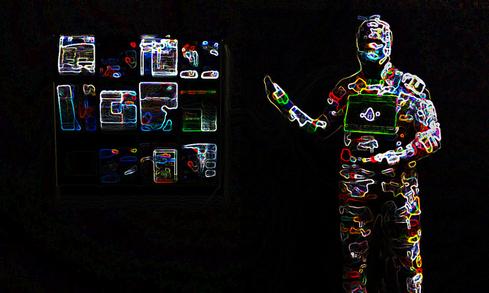 On Tuesday, Apple is expected preview its wearable, dubbed iWatch for lack of a confirmed name and due to ship next year, before favored journalists and bloggers. There will be an iPhone or two as well.

Forrester foresees Apple's iWatch offering health monitoring and authentication for mobile payments and other applications like event access, each in conjunction with partners. The firm anticipates that the wearable device will benefit from other proprietary technologies like iBeacon and Siri, as well as from the company's recent investment in Beats Electronics.

[Do you have high hopes for wearables? Read iWatch: Expected Star Of Apple's Show]

"Imagine if Apple can put sensors on your wrist and phone, yet communicate to you with a whisper directly to the Beats headphones you wear proudly; suddenly, Siri can interact with you in ways that give you a Google Glass-like experience without forcing you to look like a Glasshole," the report says.

"As millions of these iWatches find their way onto people’s wrists by year-end 2016, this category will become a crucial battleground for companies hoping to deepen their digital relationships with customers," the report says, adding that Google and Amazon are likely to follow close behind Apple.

Whether Apple customers want a way to spend money more easily, to receive notifications from marketers, and to submit to commercial tracking is less of a sure bet.

Thomas Claburn has been writing about business and technology since 1996, for publications such as New Architect, PC Computing, InformationWeek, Salon, Wired, and Ziff Davis Smart Business. Before that, he worked in film and television, having earned a not particularly useful ... View Full Bio
We welcome your comments on this topic on our social media channels, or [contact us directly] with questions about the site.
Comment  |
Email This  |
Print  |
RSS
More Insights
Webcasts
Architecting Security for the Internet of Things
Succeeding With Secure Access Service Edge (SASE)
More Webcasts
White Papers
Exclusive IT Trend Report: Chatbots
Democratizing Data Management With a Self-Service Portal
More White Papers
Reports
The State of Cloud Computing - Fall 2020
IDC MarketScape: Worldwide Managed Security Services 2020 Vendor Assessment
More Reports

After 2016, they see Android Wear and the rest of the industry overtaking Apple in terms of sales. Seems they've viewed the history of the iPhone and Android and mapped it to the future.
Reply  |  Post Message  |  Messages List  |  Start a Board

I know someone who had one of the first Pebbles and now has a more current "smartwatch." The main thing he uses it for is getting relayed notifications from his smartphone. Smartwatches are overdesigned to provide lots of functionality when most users just want the time and notifications so they don't have to pull their phone out of their pocket or purse all the time. Seems like some manufacturer would realize this and sell a really inexpensive version to capture that market.

"Predicting the future is something everyone has gotten wrong."
Nevertheless, now that the Apple Watch has been unveiled, I'm gonna make a prediction of my own. This $350 device -as long as it needs to be tethered to an iPhone- won't go beyond the niche market.
Reply  |  Post Message  |  Messages List  |  Start a Board

I think there is a lot of speculation about wearable devices.  Mac fans must be very loyal to apple to buy all their products all the time.  I think there is a huge hype around wearable and specially Mac product releases.  Whether such hype will transform into wearable and smart phones becoming more main stream I think it will be hard to see.  Predicting the future is something everyone has gotten wrong.
Reply  |  Post Message  |  Messages List  |  Start a Board

I'm all for paying with a mobile device, be it smartphone or smartwatch. But there needs to be some level of restraint with the use of iBeacons. I'm not too keen on walking into a store and being bombarded with ads and having the salesperson refer to me by name and ask me how I like the sneakers I bought there last month. Some say this improves engagement and customer service, but for me it's still on the bad side of the creepy line. Let people do mobile payments on their own terms, and build up to the hard sell.
Reply  |  Post Message  |  Messages List  |  Start a Board

> I don't yet see the utility of these sorts of wearables. Perhaps my mind
> may change at some point, but for the time being I am good with a
> smartphone. It took me long enough to see the utility in that ..

Luckily for Apple their fans in the queues dont think the same way. They must try every new shiny device that comes out with Apple logo. When a company has such a loyal fan base and such a good track record of successful products, it can afford innovation at the edge. A flop in an year or two does not hurt much then.
Reply  |  Post Message  |  Messages List  |  Start a Board

I will love to befriend Forrester researchers, James L. McQuivey and J. P. Gownde. It seems they can predict the future. Perhaps the could disclose to us -common mortals- the lottery winning numbers as well.
So, what happens after 2016 anyway?
Reply  |  Post Message  |  Messages List  |  Start a Board

The very end of this article that notes tracking and increased spending by Apple users is exactly the point of these devices.

I don't yet see the utility of these sorts of wearables. Perhaps my mind may change at some point, but for the time being I am good with a smartphone. It took me long enough to see the utility in that, and I think I will wait and see how this how wearables situation pans out. I don't even wear my fitbit anymore, haven't for some time now.
Reply  |  Post Message  |  Messages List  |  Start a Board
Editors' Choice
Hot Topics