At the auditorium where it introduced the Macintosh computer 30 years ago, Apple announced Apple Watch, its entry into the wearable computing market. It also debuted two new iPhones, and revealed its intention to replace your wallet with mobile payment technology called Apple Pay.

Chief among these is the watch's interface controller -- the rotary dial on the side of the digital timepiece. Referred to as the crown, Apple calls its version the Digital Crown. It allows navigation through watch screens in a manner similar to a reoriented click wheel on an old-style iPod. Users dial instead of scrolling.

Apple Watch comes in a variety of materials, including stainless steel, aluminum, and 18-karat gold, and can accommodate a variety of watchbands. It includes Siri and can transmit haptic events -- the watch turns touch events or heartbeats into physical vibrations that another Apple Watch wearer can feel. It offers 11 distinct watch face designs.

Apple is launching a new iOS 8 API called WatchKit to allow developers to create customized notifications for iOS apps on Apple Watch or entirely new Watch apps. Apple VP of technology Kevin Lynch described how a number of partners are developing Watch apps tied to their businesses and services, such as Disney, Whole Foods, and Walgreens. Apple Watch comes with Apple's own Fitness and Workout apps. 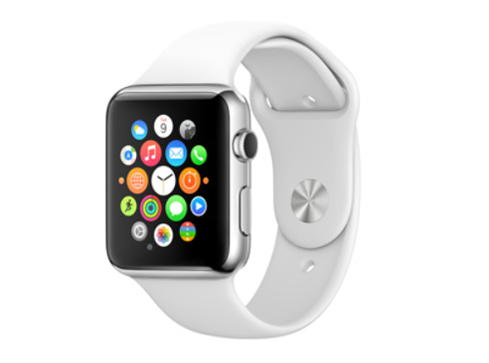 Apple Watch represents Apple's first major product introduction under CEO Tim Cook. It arrives as the market for wearable devices shows signs of life but not leadership, a situation similar to the introduction of the iPod, the iPod, and the iPad.

Apple Watch starts at $349. It will be available early next year in three versions: Apple Watch, Apple Watch Sport, and Apple Watch Edition, the last a premium line made of 18-karat gold.

The market for wearable bands such as Fitbit increased 634% worldwide in the first half of 2014 compared with the first half of 2013, according to analysis firm Canalys. Acquity Group, part of consultancy Accenture Interactive, found in a recent study that 13% of consumers plan to purchase a wearable fitness device within the next year, and 5% of consumers plan to purchase a smartwatch within the next year.

Cook introduced Apple's two new iPhone models: iPhone 6 and iPhone 6 Plus. "Today we are launching the biggest advancement in the history of iPhone," he said.

But Apple's most significant product introduction might be Apple Pay, an electronic payment process that promises security and privacy. It's going to change the way you pay for things, Cook insisted. It won't, however, change the companies processing the transactions: Apple Pay works with American Express, MasterCard, and Visa credit and debit cards from most popular banks. It will be available in iPhone 6, iPhone 6 Plus, and Apple Watch.

At the very least, Apple Pay will help iPhone users feel more comfortable with mobile payments. Apple SVP Eddy Cue explained that Apple's system doesn't store credit card numbers on its devices. Instead, it stores a unique, encrypted device account number for every card number in a piece of hardware called a Secure Element and then generates a one-time payment number based on the device account number, along with a dynamic validation code.

As a result, Apple Pay users don't have to worry about losing their payment card numbers if their iPhone or Apple Watch gets stolen. Cue stressed that Apple wants to promote privacy with Apple Pay. When you go to a store and use Apple Pay, he said, Apple doesn't know what you've purchased and the cashier doesn't see your name or security code. At a time when online companies seem to be focused on obtaining as much information about customers as possible, Apple might have found a way to make privacy pay.

At the conclusion of the event, Cook invited U2 onstage to play a song from the band's unreleased album, Songs of Innocence, and then announced the album is available free to the company's 500 million iTunes customers.

Thomas Claburn has been writing about business and technology since 1996, for publications such as New Architect, PC Computing, InformationWeek, Salon, Wired, and Ziff Davis Smart Business. Before that, he worked in film and television, having earned a not particularly useful ... View Full Bio
We welcome your comments on this topic on our social media channels, or [contact us directly] with questions about the site.
Comment  |
Email This  |
Print  |
RSS
More Insights
Webcasts
The Experts Guide to Ransomware Response
Multi-Cloud Data Management for Modern Applications
More Webcasts
White Papers
Improve your business with a Virtual CISO
Cisco Threat Response
More White Papers
Reports
Protection Strategies for a Cyber-Resilient Organization
Gartner Market Guide for Insider Risk Management Solutions
More Reports

Google's watch unveiled at Google I/O in June required an Android phone for WiFi connectivity and GPS data. And in both cases, I suspect, the watch connects to the phone via Bluetooth.The watch becomes more valuable as the two chatter back and forth, "Are you there? yes I'm here. Have you got anything for me? No, I haven't got anything for you. Oh, here's an incoming message." Some things will be convenient with the watch, such as checking an incoming text, but the chatter is going to be a drain on both batteries.
Reply  |  Post Message  |  Messages List  |  Start a Board

I would happily ditch my (already tiny) wallet and use payments via a phone. I didn't see a lot in here that makes Apple Payments all that special or sticky. We'll see, but seems like once the NFC infrastructure is in place in stores and phones, we'll have lots of options for phone payments.
Reply  |  Post Message  |  Messages List  |  Start a Board

"Apple SVP Eddy Cue explained that Apple's system doesn't store credit card numbers on its devices." Clever. How do you feel about Apple in your wallet?
Reply  |  Post Message  |  Messages List  |  Start a Board

"The Apple Watch requires an iPhone for WiFi connectivity and GPS data." Is this a big negative for you? Discuss.
Reply  |  Post Message  |  Messages List  |  Start a Board
InformationWeek Is Getting an Upgrade!