Apple Watch Battery Life: Will It Be Enough? - InformationWeek

The Apple Watch is expected to offer several hours of active use and 19 hours overall. However, in the new wearable market, is it enough?

Apple has already told us how long the Apple Watch battery will last. CEO Tim Cook implied it will need to be charged daily. A new report this week says Apple is targeting 2.5 to 4 hours of active use and about 19 hours of mixed use -- more or less confirming Cook's claims. Considering what other smartwatches in the market deliver with respect to battery life, the Apple Watch is nothing to worry about.

Apple picked a fairly powerful processor and a high-quality screen for the Apple Watch, reports 9to5mac, which lead to significant power consumption. The S1 chip inside the Apple Watch mirrors the performance of its A5 processor. The LCD is pixel-rich and refreshes at 60 frames per second.

In addition to the 2.5 to 4 hours of active use, Apple was shooting for about three days of standby time and four days in sleeping mode. Sources with direct knowledge of the matter told 9to5mac that Apple will probably only be able to deliver two or three days of standby or low-power time. Moreover, the first-generation device may not reach the hoped-for 19 hours of mixed use.

The company is testing the device's battery life heavily. It has seeded about 3,000 units to people who've been directed to use a mix of stock and third-party apps to stress the battery as much as possible. 9to5mac claims battery life concerns are what led Apple to push the watch's debut from late 2014 to early 2015.

Last fall CEO Tim Cook said, "We think people are going to use it so much, you'll end up charging it daily." Most Android Wear devices I've used need to be charged daily. I've tested the Sony Smart Watch 3, the Motorola Moto 360, and the LG G Watch R. All three devices provide about one day (7 a.m. to 11 p.m.) of mixed use. Only the Sony Smart Watch 3 delivered better than one day of battery life. Android Wear devices can count steps, track your heart rate, offer notifications for incoming calls/messages, push calendar alerts, and even play music. The Apple Watch will be able to do all these things and more. 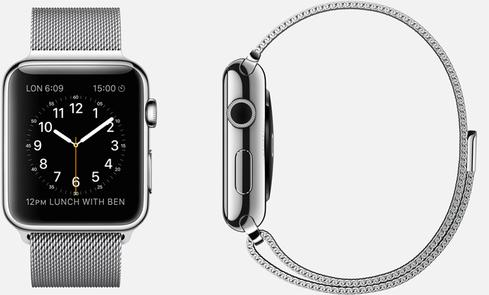 Apple's battery-life targets sound about right. It's hard to imagine spending 2.5 to 4 hours a day staring at your wrist. This is why we have smartphones. The Apple Watch is an accessory for the iPhone. Sure, it does plenty of things on its own, but most of its power comes from a nearby smartphone. The biggest concern may be the suggestion that first-generation devices may not reach 19 hours of mixed use. Apple will have to get it to at least 16 or 17 hours. Even then, it will be about on par with competing smartwatches.

The Apple Watch is expected by the end of March. Prices start at $349 and go up depending on which variant of the device you choose.

Right, we're still seeing the growth of smartphones and experimenting with how much they're capable of. Until the smartphone starts to get "old" there's really no great need for a new accessory like the smartwatch. I appreciate the effort towards innovation, but not sure that particular device is something we really need right now.
Reply  |  Post Message  |  Messages List  |  Start a Board

I don't either, to be honest. It's tough to think of something a smartwatch can do that a smartphone can't. Actually, I know a few people who wear a "dumb watch" as an accessory but still check the time on their phone.
Reply  |  Post Message  |  Messages List  |  Start a Board

>I'm better off with a dumb watch.

Or none at all. I just don't get the need for the Apple Watch.
Reply  |  Post Message  |  Messages List  |  Start a Board

In the old days, if your battery ran out on your "dumb watch," you could either 1) pay $10-20 for a new watch battery, or 2) just get a new watch.  Maybe I'm a bit of a Luddite, but it's hard for me to imagine anyone but the most devoted/deranged tech geeks and Apple fans standing for charging their watch -- among their many other devices.
Reply  |  Post Message  |  Messages List  |  Start a Board

The LG watch that Google aired at Google i/O was designed for some short, casual uses, such as glancing at email updates. But the problem was it used a Bluetooth connection to the phone, and Bluetooth is a very chatty protocol, transmitting queries: Are you there? Yes, I'm here. Do you have anything for me? No, I don't. OK, I'll call again. Yes, call again soon." Even when you, the wearer, aren't doing much, Bluetooth is constantly checking in and checking up on you. There goes the battery.
Reply  |  Post Message  |  Messages List  |  Start a Board
InformationWeek Is Getting an Upgrade!