If you're in the market for a smartwatch, Apple Watch might be your best bet.

Consumer Reports has announced the findings of its smartwatch spot-testing, which put Apple's stainless-steel wearable on top of the market. Apple Watch Sport tied with the LG G Watch R for second place. Other competitors including Pebble Steel, Moto 360, and Asus ZenWatch trailed behind, reports ZDNet.

The long-awaited Apple Watch made its public debut on April 24, when it was delivered to the eager customers who placed orders as the clock struck midnight on April 10. Now, about 22% of the 1.7 million who preordered the Watch actually have one. The other 639,000 are still waiting.

[See it for yourself: My Apple Watch in-store demo.]

The number is poised to escalate even further, despite mixed reviews. Apple Watch was placed ahead of competitor smartwatches in their second and third generations. Consumer Reports wrote that its "ease of pairing and ease of interaction," along with its durability and water resistance, earned it top marks.

Over the course of several weeks, Consumer Reports tested 11 smartwatches, counting the 38mm and 42mm Apple Watches as distinct models. Testers evaluated the devices for durability, health functionality, readability in both low and bright lighting, and ease of use and interaction.

Water resistance testing was conducted in a chamber that can be pressurized to simulate depths up to 230 feet, wrote Consumer Reports. Apple claims that its products align with IPX7 under IEC standard 60529, officials explained, meaning the Watch should be able to function after 30 minutes in 3.3 feet of water. 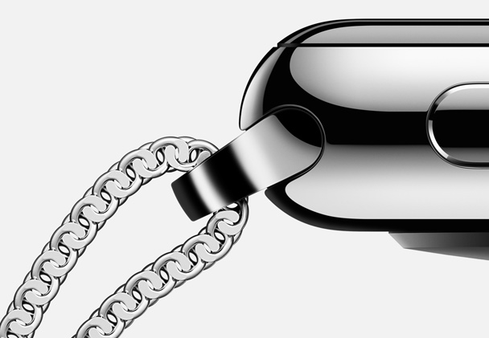 The stainless steel Apple Watch was fine after its first test, which involved submersion according to each manufacturer's limits, a post-submersion functionality check, and another check after one day. The first Sport showed problems after 24 hours, but later samples proved fine so it was also granted a pass.

Devices were evaluated for durability with scratch-resistance tests. The sapphire crystal face of the stainless steel Watch proved a winner in this, withstanding a pick scratch just below diamond hardness. The Ion-X glass Sport scored slightly lower, as did other devices with Gorilla Glass faces.

Kelly Sheridan is the Staff Editor at Dark Reading, where she focuses on cybersecurity news and analysis. She is a business technology journalist who previously reported for InformationWeek, where she covered Microsoft, and Insurance & Technology, where she covered financial ... View Full Bio
We welcome your comments on this topic on our social media channels, or [contact us directly] with questions about the site.
Comment  |
Email This  |
Print  |
RSS
More Insights
Webcasts
SASE: The Right Framework for Today's Distributed Enterprises
Managing a Hybrid Cloud Infrastructure
More Webcasts
White Papers
2020 SANS Enterprise Cloud Incident Response Survey
The Top 5 Mistakes Everyone is Making in Vulnerability Remediation
More White Papers
Reports
Intelligent Outcomes Are Key to Business Resilience
Are We Cyber-Resilient? The Key Question Every Organization Must Answer
More Reports

I'm sure the Apple Watch is lovely. It just doesn't do anything for me. Maybe version 2.0 will be more compelling.
Reply  |  Post Message  |  Messages List  |  Start a Board
Editors' Choice
Hot Topics