The first shipment of Apple Watches reached eager owners on April 24. We stopped at an Apple Store in New York City to test one out. 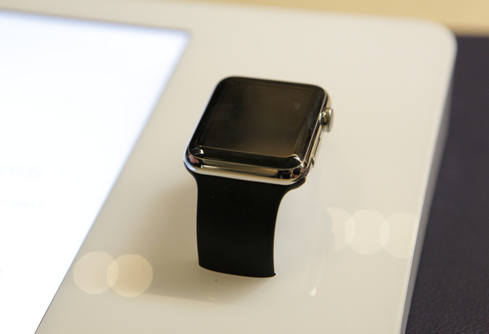 It's official: The Apple Watch has made its public debut. Starting today, you'll be seeing its early customers talking to their wrists, sending heartbeats, tapping Watches at checkout, or jogging in style. You'll also see them on display in stores like the one in New York's Grand Central Terminal, where we went to get a sneak peek of the wearable.

The Watch is largely supported by the iPhone, which is required to achieve the full extent of the smartwatch's functionality. Like iPhone, it will support a range of third-party apps designed to boost everyday convenience for consumers and businesses alike.

Reviews for the Apple Watch have been mixed so far. While testers seem to agree that it's the best smartwatch on the market in terms of design and construction, there are quite a few flaws in the first iteration that Apple will hopefully address in future updates. Reviewers speak to buggy apps and less-than-desirable battery life.

Apple started accepting preorders for the wearable on April 10, and demand was great enough to push back shipping times to July. Analysts estimate that almost one million people have placed orders for the pricey smartwatch.

If you decide that a Watch is on your shopping list -- and you're prepared to wait -- you'll have to hop online. Angela Ahrendts, Apple's retail chief, stated that the company will be exclusively selling Apple Watch online through June.

While it won't be available for sale in Apple Stores, the smartwatch can be found in boutiques located in major cities around the globe. Paris, London, Tokyo, Berlin, and Los Angeles are among the lucky few; sadly, New York was not.

In typical Apple fashion, the Watch doesn't come cheap. The least expensive version, Watch Sport, costs $349 for a 38mm face and $399 for 42mm. Most people who preordered Apple Watch opted for the Sport; the rest selected Apple Watch, which starts at $549 and runs up to $1,099 for certain models.

After testing it, I can safely say that Apple Watch has a lot of potential. Sure, version 1.0 has room for improvement, but overall I found it to be a comfortable, sleek, and useful device. Click through to "Watch" what happened during my first hands-on experience with Apple's wearable.

I would tend to think that a later generation of the Apple Watch will work independently of an iPhone.

Of course, I would have tended to think that of the first incarnation......
Reply  |  Post Message  |  Messages List  |  Start a Board

@Angelfuego: I'm with you.  The only reason I have a newer model phone is because I dropped my iPhone 3GS three stories.  If not for that, I'd probably still be using it.
Reply  |  Post Message  |  Messages List  |  Start a Board

Probably not. At least, not now (and not just because my aging iPhone 4 wouldn't be compatible). I think it's impressive and has a lot of potential, but so far Apple hasn't demonstrated a purpose for Watch that isn't already on my iPhone. It's focusing a lot on fitness, but Apple Watch doesn't do anything my Garmin doesn't already do. I'd also like to see a model that doesn't require a nearby iPhone at all times; that might be a game-changer.
Reply  |  Post Message  |  Messages List  |  Start a Board

That reminds me... I have an attorney friend who pre-ordered one.  I should ask her what she thinks of it.
Reply  |  Post Message  |  Messages List  |  Start a Board

To be clear, that "3S" reference was a joke about Apple's product-naming schemes.  ;)
Reply  |  Post Message  |  Messages List  |  Start a Board

@Sachin: Apple has never been a company for customization.  It's always been sit down, shut up, and trust us that this is the best design (as one might expect from a company founded by Steve Jobs).

Maybe that's a good thing in many cases, but it does alienate some potential customers, to be sure.
Reply  |  Post Message  |  Messages List  |  Start a Board

@SachinEE: I would be interested in judging the quality of the product and its software first-hand before judging it on those bases.

...except for the fact that I'm really not interested in wearing a watch in general.  Apple has to convince me to go back to wearing something on my wrist almost every day before the company can convince me to select its product for that purpose/honor.

You can always wait for the price to come down around the time the Apple Watch 3S comes out.  ;)
Reply  |  Post Message  |  Messages List  |  Start a Board