Apple's latest MacBook, with its 12-inch Retina display and new USB-C port, has drawn praise for its ultra-thin design and typical aesthetic finesse, but the lack of ports should be considered.

While the bulk of this week's media attention was focused squarely on the Apple Watch, the company also launched a brand new MacBook notebook with a 12-inch Retina display and USB-C port -- Apple's latest in a long line of svelte connecting devices.

The MacBook, which is 24% thinner than the 11-inch MacBook Air, is offered in three colors -- gold, silver, and space gray. It also boasts an Apple-designed butterfly mechanism for the keyboard, which the company says is four times as stable and 40% thinner than a traditional laptop keyboard.

The notebook features the company's Force Touch trackpad, designed with force sensors that allow users to customize the feel of the trackpad by changing the amount of pressure needed to register each click. The trackpad also enables a new gesture called Force Click, a click followed by a deeper press, for tasks like pulling up the definition of a word, checking a map, or taking a look at a file preview. 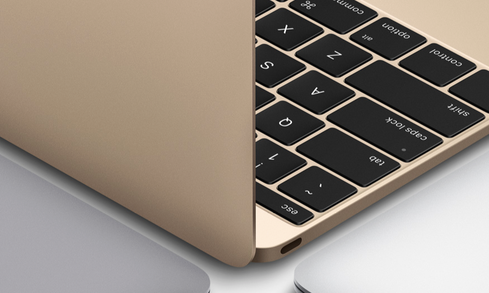 While there is no doubting the impressiveness of the technical specs --Apple has engineered a razor-thin (just 13.1 mm at its thickest point) machine boasting 14 hours of battery life and no moving parts or vents -- the quest for portability has resulted in some limitations.

Reviews of the device from all corners of the Web have highlighted the MacBook’s precision detailing and lightness -- it weighs less than two pounds -- but Apple’s decision to offer just the one USB-C port left some publications unsatisfied.

"Using a computer that feels like it fell through a time warp from the future is fun, but if that computer drops through the wormhole without any compatible accessories then there's going to be some aggravation, too," MacWorld's Jason Snell wrote in his review. "The new MacBook is one of those Apple products. It feels like it came from the future, and didn't bring its ecosystem with it."

Most publications gave the notebook overall positive reviews, with many acknowledging the limitations that come with designing such a thin machine -- and at least one reviewer who was more than happy to ditch the ports in exchange for all-day battery life.

"If you know going into the purchase that you are going to connect a bunch of things to your computer, perhaps the MacBook isn't for you," wrote Jim Dalrymple of the Apple-focused news blog The Loop. "There’s nothing wrong with that, but for a lot of people, like me, not having the ports isn't a big deal."

[ Read about the Surface versus the iPad air 2. ]

Nathan Eddy is a freelance writer for InformationWeek. He has written for Popular Mechanics, Sales & Marketing Management Magazine, FierceMarkets, and CRN, among others. In 2012 he made his first documentary film, The Absent Column. He currently lives in Berlin. View Full Bio
We welcome your comments on this topic on our social media channels, or [contact us directly] with questions about the site.
Comment  |
Email This  |
Print  |
RSS
More Insights
Webcasts
SASE: The Right Framework for Today's Distributed Enterprises
Managing a Hybrid Cloud Infrastructure
More Webcasts
White Papers
How to Avoid the Challenges of Cross-Platform Data Access Governance
Annual Cybercrime Report
More White Papers
Reports
We Need Your Input: Trends in Workforce Optimization
Are We Cyber-Resilient? The Key Question Every Organization Must Answer
More Reports