19 comments
Comment Now
Apple is expected to reveal new iPads this week, including its long-rumored "iPad Pro." What else will Apple show off? 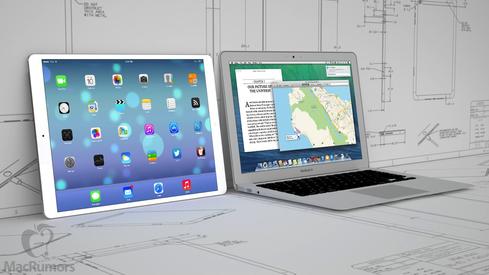 The iPad Pro
For more than a year, a barrage of rumors has claimed Apple plans to launch a bigger iPad with a 12.9-inch screen. The most recent chatter indicates the so-called "iPad Pro" might not hit the market until next year, but Apple might preview the device this week, just as it teased its upcoming Apple Watch when it launched new iPhones. Aside from extra screen real estate, it's not clear how a larger iPad might offer new capabilities not found in the Air and Mini form factors, which offer screen sizes of 9.7 inches and 7.9 inches, respectively. Certainly, if the iPad Air 2 uses 2 GB of RAM and an A8X chip, an iPad Pro would similarly require souped-up internals.

Compacting more electronics and more functionality in today's devices is something that for years people asked for.

Try to not fall into the current trap that seems to be around: People are unhappy no matter what it is and complain for absolutely everything that technology is bringing today.

People complain even about the devices that have never seen, like the Apple Watch. How they can complain and criticize something they have never seen is inexplicable to me. :/

Yes, there is something about finding that "equilibrum."It also depends of different factors. People are driven by different motivations.

If not really a manufacturers problem if people don't take care of their belongings, especially when they are expensive. Can you have a delicate glass product and treat it as if it were made of steel? No, right?

Well, in the same way you can't treat your phones and iPads as if they were a made of plastic, or iron. Materials have limitations and no one can do anything about that. The same with the electronics part, not only the screens.

Don't blame Apple if you let your iPhone fall. Try to be more careful, instead. :) Wouldn't that be something you would tell a child?

Pedro, one more thing. I wonder if those people blame the car manufacturer for not making anti-crash cars when they go crashing their car.

Exactly. You don't go being careless with an expensive device so you brake it and then go on blaming the company because you did crash the screen.

I can't imagine what those people you saw with iPads with broken screens did to them. It's certainly not Apple's fault.

There is an annoying tendency lately. People complain no matter what it is. People complained because U2 gave their new album for free and everyone who wanted it could download it on iTunes. I found surprising that Bono apologized for having done something nice. People are ungrateful. I felt so sorry for Bono and U2. :(

It's really the first time I see that people consider a gift as something bad.

And back to the iPhones and iPads. As I said earlier, devices don't brake by themselves without any help from the user.

About people complaining and generating a snow ball on social media, I believe many of those people just repeat and retweet, or share what others have said in automatic mode. They don't even know what they are doing.

People seem to be eternally unhappy with any technology lately.

"They forgot to mention whether they would make ipad's screens more durable.  I see a lot of people using their Ipads with the broken screens."

It's not that iPads don't have durable screens. The problem with some people is that they are careless. That's why they brake their iPad's screens.

Screens don't brake by themselves.

As noted in the story, rumors conflicted regarding whether Apple will refresh both the Mini and Air this week, or just the latter.

In Microsoft-like fashion, Apple accidentally posted (and then removed) information about the new tablets in an iBooks document. There wasn't a lot of specific information, aside from the ostensible inclusion of Touch ID in both models-- but now we know both devices are coming.
Reply  |  Post Message  |  Messages List  |  Start a Board

Good eye. The line's been changed to "Apple makes more money than Microsoft and Google combined."

The iPad Pro (or whatever it ends up being called) is no sure thing for Thursday, but there's enough buzz that I wouldn't be surprised. I'm eager to see what a larger iPad would bring, though the Retina iMacs are the rumored item that has me most intrigued.
Reply  |  Post Message  |  Messages List  |  Start a Board
Page 1 / 2   >   >>
InformationWeek Is Getting an Upgrade!