An Accenture study finds that online ads are unpopular with most consumers, while ad-blocking tools are making it easier than ever to tune out unwanted messaging. How are you supposed to promote your brand?

Most consumers dislike online ads, and many are aware of tools that can deal with the problem, a finding that global business consultancy Accenture said threatens the digital advertising industry.

In a survey of 28,000 consumers across 28 countries, Accenture has found widespread disenchantment with digital advertising. Accenture is releasing its findings in conjunction with the National Association of Broadcasters Show, April 16-21 in Las Vegas.

About 42% of consumers say they'd pay to eliminate ad interruptions, which bodes well at least for subscription-based online business models.

For advertisers, the glass could be either half-full or half-empty: Half of respondents said they're interested in ads if those ads meet their interests. 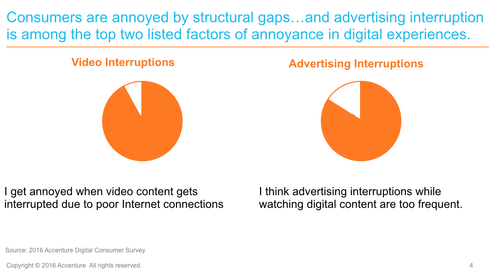 Identifying those interests becomes a challenge, however, when consumers don't trust advertisers and consequently don't share information about their interests. That's why Facebook's Mark Zuckerberg, among others, has made it a habit to encourage people to share content online. Without behavioral data to mine, the ads get even less relevant to the consumer, and ad blocking looks more appealing.

The survey does not contemplate the flipside of the coin: what it means when half of those surveyed express disinterest in ads, targeted or otherwise.

In a phone interview, Gavin Mann, Accenture's global broadcast industry lead, said that his firm conducts media and technology research every year, but that it didn't set out specifically to examine ad blocking. "The most interesting statistics are around ad blocking because the numbers are high," he said.

The Internet Advertising Bureau has called ad blocking "a potentially existential threat to the industry." It blames "unethical technology companies seeking to divert ad spending into their own pockets," a reference to firms like Eyeo, maker of Adblock Plus, and browser maker Brave Software, both of which see demand among consumers for moderating ad industry excesses.

The ad industry has been slow to recognize its own role in the growing distaste for ads. Online ad networks remain a source of malware. The ads themselves make Web pages load more slowly while they take up unnecessary bandwidth. Advertisers generally use ad-tracking technology without adequate notice and consent from consumers.

According to Mann, the ad industry's focus on external threats such as ad blocking represents a normal response to the challenge advertisers are facing. "The incumbent players should defend their position while exploring new opportunities."

>what if it were an opt-in approach

My sense is the tech industry has concluded almost no one opts-in for anything.

Advertisers prefer to charge ad rates as if everyone who hasn't opted out represents a potential customer. Opting in would reveal the essential fraud upon which the ad business is built. And companies seeking investor money have an easier time if they use opt-out math.
Reply  |  Post Message  |  Messages List  |  Start a Board

Advertising, including targeted messaging, attempts to thrust a message into the consciousness of an at-best disinterested or barely interested person. Instead of an intrusive approach, what if it were an opt-in approach, where the viewer first expressed interest in a product or service and an advertising -- make that need-satisfying -- service assembled the highest rated materials available in response? It would be information you actually need when you need it.
Reply  |  Post Message  |  Messages List  |  Start a Board
InformationWeek Is Getting an Upgrade!