Today in a press release, AT&T announced it would be releasing its first 4G LTE smartphones--the HTC Vivid and the Samsung Galaxy S II Skyrocket--for customers across the United States in a week. 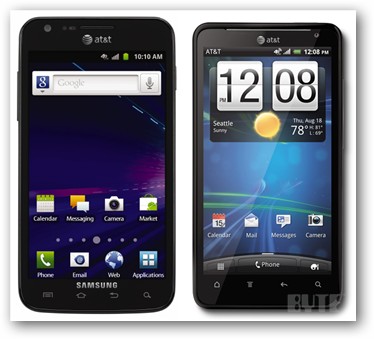 The HTC Vivid (right) is a 1.2-GHz dual-core phone running the Gingerbread edition of Android, with a 4.5-inch qHD (540-pixel-by-960-pixel) display. The Skyrocket (left) has a slightly beefier dual-core processor--1.5 GHz--albeit a smaller display (800 pixels by 400 pixels). Both phones sport 8MP cameras capable of shooting 1080p HD video, and come with 16GB of onboard memory expandable to 32GB.

Last month, AT&T officially launched its 4G LTE network in five markets: Atlanta, Chicago, Dallas-Fort Worth, Houston, and San Antonio. New 4G LTE networks will launch this coming week in Boston, Washington D.C., Baltimore, and Athens, Ga. Up to 15 markets will be added by the end of the year.

AT&T already has strong competition from Verizon, which has its own 4G LTE network in 165 cities and 111 major airports, according to its coverage map, and plans to aggressively expand to cover "two-thirds of the U.S. population by mid-year 2012". Verizon's most recent 4G LTE phones include another Samsung phone--the Samsung Stratosphere--as well as the new Droid Razr by Motorola.

One handset maker not yet heard from is Apple. The newly-released iPhone 4S supports HSPA+ but not 4G LTE, and for that reason disappointed analysts. No reliable word about 4G LTE support--or much of anything else--has surfaced for future generations of iOS devices.

4G LTE-capable handsets need the full support of a 4G LTE network to show off what they can do. But the state of 4G networks in the U.S. is spotty, to put it mildly. AT&T and T-Mobile have previously rolled out a network that was described as 4G but is in fact an augmented version of 3G, known as HSPA+. What's more, 4G networks cannot be rolled out just anywhere; they require existing 3G infrastructure, and parts of the country do not yet have 3G coverage, either.

4G LTE, which promises data speeds up to 10 times that of 3G, is being promoted as the real deal, not simply a half-step like HSPA+ or a tried-but-abandoned implementation of 4G like WIMAX. That said, AT&T's network uses both LTE and HSPA+ 4G network speeds, so users in areas that do not yet have 4G LTE coverage can fall back to HSPA+ or plain old 3G.

AT&T also has provided a YouTube video that explains the advantages of 4G LTE for newcomers:

Both phones will be available in stores and via AT&T's website starting Nov. 6. The Galaxy S II Skyrocket is $249.99 and the Vivid is $199.99, both with a new two-year contract.

We welcome your comments on this topic on our social media channels, or [contact us directly] with questions about the site.
Comment  |
Email This  |
Print  |
RSS
More Insights
Webcasts
Protecting Your Enterprise's Intellectual Property
Building the SOC of the Future: Next-Generation Security Operations
More Webcasts
White Papers
Two-Factor Evaluation Guide
Seven recommendations for a Successful SD-WAN Strategy
More White Papers
Reports
How IT Security Organizations are Attacking the Cybersecurity Problem
DNS Network Traffic Volumes During the 2020 Pandemic
More Reports