50%
Tweet
Nook 3G prices have been slashed in addition to the new Wi-Fi only e-reader that includes AT&T hotspot access. 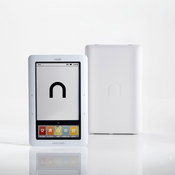 Barnes & Noble Drops Nook Price
Barnes & Noble has dropped the price of the Nook, as competition in the electronic-reader market heats up with the entry of a variety of devices, such as Apple's iPad.

B&N on Monday slashed the price of the Nook 3G from $259 to $199 and introduced a Wi-Fi-only version for $149. The latter comes with complimentary access to any AT&T hotspot, while the 3G model can tap into the carrier's wireless broadband network at no charge for buying and downloading e-books from the bookseller's online store. The 3G model also supports Wi-Fi.

B&N cut prices about the same time rival Borders started shipping the $150 Kobo e-reader. However, B&N has done one better than the Kobo by including Wi-Fi with the lower-priced Nook. The Kobo requires a PC or Mac to download e-books.

Along with Borders, Apple is ratcheting up the competitive pressure with the iPad, a tablet-style computer released in April. Apple launched its online bookstore with the iPad, which has a starting price of $489, but offers multimedia capabilities, such as video and music; Web browsing, e-mail and other features not found in dedicated e-readers like the Nook. Other computer makers, such as Hewlett-Packard and Dell, plan to release iPad competitors in the future.

To compete with the growing number of tablets like the iPad, analysts have said the price of e-readers will have to fall. With B&N lowering prices, its likely competitors will follow. Along with Borders, B&N competitors include Amazon. The online retailer's Kindle was the biggest selling e-reader last year.

While similar to the original Nook, the Nook 3G and Nook Wi-Fi are a bit lighter at 11.6 ounces instead of 12.1 ounces. The older model's grey back cover has been replaced with a removable white one that a customer can replace with one of four additional back cover colors.

Along with the e-reader refresh, B&N released a software update. Version 1.4 primarily adds complimentary access to AT&T's nationwide Wi-Fi network, as well as continued access to B&N's network in the retailer's stores.

We welcome your comments on this topic on our social media channels, or [contact us directly] with questions about the site.
Comment  |
Email This  |
Print  |
RSS
More Insights
Webcasts
The Best Ways to Stop Malware and Ransomware That No One Else Will Tell You
Get Your Security Tools Talking for More Effective Incident Response
More Webcasts
White Papers
2020 Gartner Market Guide for Network Detection & Response
How You Can Evaluate Your Org's Cybersecurity Readiness
More White Papers
Reports
The Drive for Shift-Left Performance Testing
The State of IT Operations and Cybersecurity Operations 2020
More Reports