50%
Tweet
The San Francisco Giants, already one of the most high-tech teams in baseball, now lets fans buy tickets on their iPhones. To take advantage, fans must have upgraded their iPhones to iO6. The upgrade includes Passbook, Apple's new mobile wallet app.

The San Francisco Giants is one of the first organizations to use Apple's new mobile wallet app, Passbook, to let fans buy tickets on their phones.

Last night at AT&T Park, fans who had upgraded their iPhones to iOS 6 were able to use the electronic Passbook tickets. Passbook is included in iOS 6, Apple's latest mobile operating system. Here's what a ticket looked like: 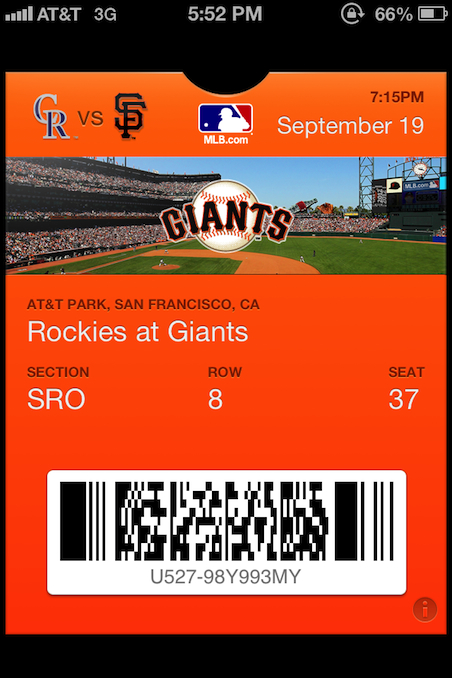 Major League Baseball, StubHub, and Fandango also are trying out the Passbook app, bringing the idea of the virtual wallet to the masses.

The Giants won last night. It wasn't quite like the last time we were there, when the Giants' Matt Cain threw a perfect game. With Passbook the Giants continue to push the boundaries of technology in use at ballparks. Earlier this year BYTE covered how AT&T Park's IT team accommodates the increasing number of mobile phones being used at sold-out games to make calls, text, and take and send pictures.

Before you upgrade your own iPhone to iOS 6 for Passbook and other new features, read about BYTE editorial director Larry Seltzer's upgrade experiences.

We welcome your comments on this topic on our social media channels, or [contact us directly] with questions about the site.
Comment  |
Email This  |
Print  |
RSS
More Insights
Webcasts
Cloud Security Threats Enterprises Need to Watch
Linking, Orchestrating, and Managing Your Enterprise Security Systems
More Webcasts
White Papers
Using AI to Power AppSec
Simplify Your App Security
More White Papers
Reports
Can You Spare 10-12 Mins to Help Us Out with a Survey on Tech Trends?
Got 7 Minutes? Dark Reading Needs Your Help With Our Survey on Incident Response
More Reports