The British Broadcasting Corporation (BBC) has partnered with more than two dozen companies and organizations, including ARM, Microsoft, and Samsung, to provide at least a million UK students, ages 11 and 12, with a free pocket-sized computer called the BBC micro:bit.

Similar to Arduino, Raspberry Pi, and a variety of other DIY electronic kits that have emerged as educational tools in recent years, the BBC micro:bit is a circuit board with electronic components that can be programmed and modified. It lacks a display other than 25 individually programmable LED lights. But that should suffice for experimentation and for augmenting other devices or cloud services.

With an accelerometer for sensing motion, a magnetometer for sensing orientation, a micro USB connector, two programmable buttons, three input-output rings, and Bluetooth hardware for networking, the BBC micro:bit can be adapted to serve as a controller, sensor, or interface for mobile phones, computers, or consumer electronic products. The BBC says the micro:bit will show up in schools in October.

The BBC undertook a similar initiative back in 1981 when it offered the BBC Micro, built by Acorn Computer, to improve computer literacy. 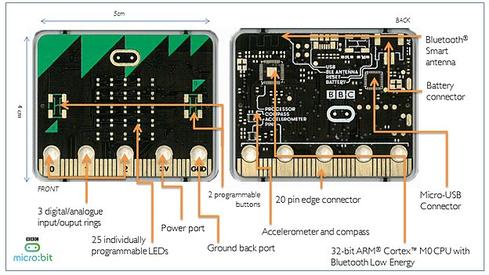 "Channelling the spirit of the Micro for the digital age, the BBC micro:bit will inspire a new generation in a defining moment for digital creativity here in the UK," said Tony Hall, director-general of the BBC, in a statement. "All you need is your curiosity, creativity and imagination -- we'll provide the tools."

In some sense, the BBC is providing the tools to accelerate its undoing. According to the organization, the licensing revenue it collected from owners of televisions in the UK (£145.50 or ~$225 per color TV) is projected to decline by £150 million or ~$231 million in the 2016/2017 period. The decline correlates with decreased television ownership and increased use of the Internet and mobile devices to view BBC content. With more than 1,000 layoffs expected by 2017, the BBC said this decline shows the need to adapt the UK's licensing fee system to cover to modern viewing habits and devices.

The Confederation of British Industry and Accenture have suggested that there's a shortage of skilled workers in the UK, a sentiment heard often from tech companies in the US.

But some contend that what companies characterize as a shortage amounts to a desire to increase the supply of capable tech workers in order to pay lower wages. In an email to Bloomberg last year, Dean Baker, co-director of the Center for Economic and Policy Research, wrote, "It seems pretty clear that the industry just wants lower-cost labor."

Thomas Claburn has been writing about business and technology since 1996, for publications such as New Architect, PC Computing, InformationWeek, Salon, Wired, and Ziff Davis Smart Business. Before that, he worked in film and television, having earned a not particularly useful ... View Full Bio
We welcome your comments on this topic on our social media channels, or [contact us directly] with questions about the site.
Comment  |
Email This  |
Print  |
RSS
More Insights
Webcasts
Building Asset Management into Your Enterprise Security Strategy
Advancing the Hybrid Cloud & App Modernization Journey with IBM
More Webcasts
White Papers
Gartner: Hype Cycle for Security Operations
The Impact of the SolarWinds Breach on Cybersecurity
More White Papers
Reports
Enabling Enterprise Resiliency Through Cyberthreat Detection
The State of Cloud Computing - Fall 2020
More Reports

Based on your experience, it seems the BBC Micro program accomplished its goals. That augurs well for the micro:bit project.
Reply  |  Post Message  |  Messages List  |  Start a Board
InformationWeek Is Getting an Upgrade!