The need for the BlackBerry Enterprise Server that's still in almost all large organizations has been declining, but BES 10 changes everything. Instead of being a legacy server to manage legacy phones, BES 10 can be the cental console for managing all mobile devices.

Many have written off BlackBerry, the company formerly known as RIM, but it was always too soon to do that. Now that the BlackBerry 10 strategy is out for the world to see, it's not at all hard to see the phone maker surviving and succeeding. In fact, it may end up leading the industry again.

I'll ignore the innovative user experience on the new BlackBerry 10 phones for now and focus on an area where BlackBerry long set the standard for the industry: a secure management back-end. Ninety percent of the Fortune 500 and a very high percentage of other large companies have a BES (BlackBerry Enterprise Server). It was BES that brought us what later became known generically as MDM or Mobile Device Management and features like remote wipe, without which businesses might not have allowed mobile devices on their networks.

BlackBerry offers another significant benefit to companies: All traffic from BlackBerry devices goes encrypted to the BlackBerry NOCs (Network Operations Centers) from where it goes to a company's (or ISP's) BES. This arrangement also provides for emails, contacts, task entries, memopad entries and calendar entries to be pushed actively out to the user rather than to wait for the user's device to initiate a synch operation.

As everyone knows though, in spite of these benefits, in 2013 few enterprises are dominated by BlackBerry phones. Certainly few new orders are being taken for those phones. Consequently, these enterprises are filled with iPhones, iPads and, to a lesser degree, Android devices. An industry has developed to offer management products and services for these devices with notable names like MobileIron, SOTI and AirWatch. 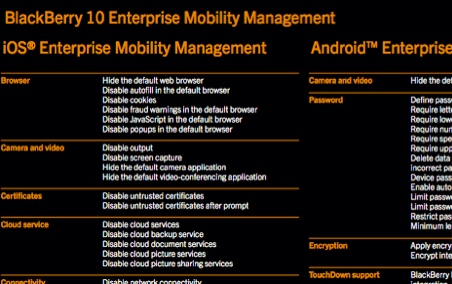 Now, to that list, add BlackBerry.BES 10 manages iOS and Android devices just as it manages BlackBerries.

It doesn't stop there: It's not in the current release, but BlackBerry says it will deliver the same secure communication architecture through the BlackBerry NOC for iOS and Android devices as for BlackBerry devices. They will get the same push email and other services.

For BlackBerry devices now, BES 10 goes much further than the MDM the company created many years ago to manage devices. In the last several years many companies have created various techniques to strengthen the management of mobile devices, their users, data and applications. The biggest part of these techniques is MAM (Mobile Application Management) and collectively they are all known as EMM (Enterprise Mobility Management).

EMM, as I said, is a name for a loose collection of techniques designed to go beyond simple, coarse device management. Users hate MDM, especially in a BYOD environment. It allows — nay, mandates! — that IT administer both the business and personal content on the phone. IT may find it necessary to wipe the device, and this will wipe everything, including the pictures of your kids. (Parenthetically, this is another reason you should always back up personal data to some cloud service.)

There's no clear definition of what services EMM provides and how, nor is there even a clear industry-wide vocabulary for it. But BES 10 has a definition of its features. What makes them different from Apperian, Zenprise or Good Technology, all of which make products that advance the capabilities of managing applications and data on mobile devices? The answer is that a very high percentage of large organizations already have a BES on their network.

True, the need for the BES on those networks has been declining as users move away from their BlackBerry devices, but the BES is still there and working. If the move up to BES 10 isn't too hard to do, it can solve a lot of problems for IT. The BES can manage all of their iOS and Android devices and make them more secure in the process. BlackBerry tells me they think they have the best implementation of MAM for third-party devices available. Deploying a secured app is as easy as checking a box in BES 10 admin before deploying the app.