BlackBerry executives Mike Lazaridis and Jim Balsillie were blown away by the original iPhone's browser and other media powers, but wrote it off as just another competitive threat -- not the worldwide, industry changer it turned into. Their initial assessment, as we now know, eventually led to the company's collapse in the face of a crushing sea change across the industry.

When Steve Jobs debuted the original iPhone in January 2007 BlackBerry's co-CEOs were left with many questions, according to excerpts from the book by Jacquie McNish and Sean Silcoff, Losing The Signal: The Untold Story Behind the Extraordinary Rise and Spectacular Fall of BlackBerry.

"Jim, I want you to watch this," said Lazaridis to Balsillie the day after the iPhone's debut. "They put a full web browser on that thing. The carriers aren't letting us put a full browser on our products."

"Apple's got a better deal [than us]," responded Balsillie. "We were never allowed that. The U.S. market is going to be tougher. It's OK, we'll be fine."

Lazaridis' initial thought was that the iPhone would destroy AT&T's network -- which it almost did. His amazement wore off and both he and Balsillie decided the iPhone didn't target business users and wasn't something to be concerned with at the time. After all, the original iPhone had only a 2G radio and battery life that measured in hours rather than days, cost a fortune, and had -- what BlackBerry called -- a terrible keyboard. 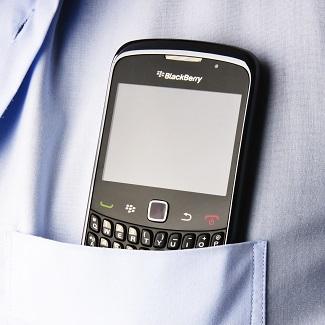 BlackBerry's core focus was on battery performance, limited use of carrier network resources, providing a functional keyboard, and secure messaging and email. The iPhone didn't do any of that. BlackBerry's leaders concluded the iPhone would fail. They were caught off guard when it didn't.

So was Verizon Wireless.

The iPhone was an exclusive to AT&T and it became a powerhouse seller there. Verizon desperately wanted a touchscreen device to compete against the iPhone. It asked BlackBerry to deliver that device, and the result was the BlackBerry Storm.

The Storm was a curious, but tragically flawed smartphone.

It had a touchscreen, but the entire glass panel of the phone moved when users typed on the keyboard. The resulting "click" was meant to feel like typing on a traditional keyboard rather than a piece of glass. The phone was buggy, however, with a slow browser and lots of crashes. It didn't help that BlackBerry delivered the device six months late -- well after Apple launched the iPhone 3G, iOS 2, and the iTunes App Store.

The Storm was an initial success, with more than one million units sold in the first two months. "It was the best-selling initial product we ever had," said Lazaridis. "We couldn't meet demand." But the bugs killed the phone. Verizon was forced to replace nearly every unit it sold and came down on BlackBerry hard for the massive failure.

"You're going to make us whole on the money we've spent fixing your Storm product problems," said John Stratton, Verizon's chief marketing officer, to Lazaridis and Balsillie, "or we'll revisit our whole supplier relationship with you. This is your responsibility. We expect you to step up because this is your fault, not ours."

Verizon wanted $500 million, but RIM said it didn't have that kind of cash. Instead, the company offered free repairs and other concessions.

"Everybody was upset. It was demoralizing for the whole organization," said chief operating officer Don Morrison. "You're shattering the very fabric of what BlackBerry stood for."

[Read about the BlackBerry Leap.]

Lazaridis insisted on staying the course and had the company focus on creating devices that offered its four core pillars (battery, security, keyboard, efficiency). By this point, however, Android was making a play in the consumer space and began to push screen sizes larger and larger. The Storm 2, with the iPhone 3Gs and Motorola Droid as competitors, fared no better than the original.

In the end, Lazaridis gives more credit to AT&T than to Apple.

"There was a point where the carrier, by changing the rules, forced all the other carriers to change the rules eventually," said Lazaridis. "It allowed Apple to reset what the expectations were. Conservation didn't matter. Battery life didn't matter. Cost didn't matter. That's their genius."

Had AT&T not allowed Apple to put the Web browser and other network-dependent apps on the original iPhone, it may not have been the success we know today.

Losing The Signal is available from Amazon.com beginning Tuesday, May 26.

Eric is a freelance writer for InformationWeek specializing in mobile technologies. View Full Bio
We welcome your comments on this topic on our social media channels, or [contact us directly] with questions about the site.
Comment  |
Email This  |
Print  |
RSS
More Insights
Webcasts
Building Asset Management into Your Enterprise Security Strategy
Cybersecurity Risk Management
More Webcasts
White Papers
ITSM for the Enterprise - What Makes it Work?
The Five Major Security Pitfalls of WFH and How to Solve Them
More White Papers
Reports
The State of CCPA 2021
Gartner Market Guide for Insider Risk Management Solutions
More Reports